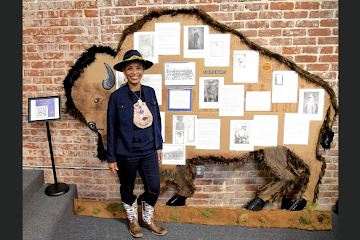 This week, the nation commemorates the patriotism of the Buffalo Soldiers, the Black men who served in segregated regiments of the U.S. Army from 1866 to 1951. For Pomona Community Life Commissioner Donna Jackson-Houston, National Buffalo Soldiers Day on July 28th is deeply personal.

Jackson-Houston has on display a Buffalo Soldiers exhibit in Pomona, that features photos and articles from some of the men who served, including her grandfather. Lucius Franklin Monroe Jackson, was a Buffalo Soldier in the 25th Infantry of the U.S. Army stationed at Camp Little, AZ.

“My family and I only recently discovered this historic fact. Last year I read an article that my grandfather had come to Nogales in 1918 as a Buffalo Soldier to secure and patrol the U.S. border. With this newfound discovery, I thought it was vital to recognize not only my grandfather but also the other Black soldiers who fought for our country”, said Jackson-Houston who is the Chair of the City Life Commission.

So, with the help of family members and community leaders in Nogales, Arizona, last January Jackson-Houston organized a grand 3-day celebration of the Buffalo Soldiers stationed at Camp Little, many of whom settled in Nogales and raised families. The celebration included a program held in downtown Nogales, a cemetery Salute, and a museum exhibit to educate people about the important contributions the Buffalo Soldiers made to U.S. military history.

“The exhibit features a display of historical photos and stories documenting the lives of the soldiers and their families and the significant contribution they brought to their communities and the nation.  It is such an honor to share our proud ancestry and the patriotism these brave men and women contributed to American history”, said Jackson-Houston.

“I greatly appreciate the support of Mayor Sandoval and Council, Pomona Unified School District, NAACP PV, Chara Swodeck and so many other community leaders and organizations involved in making this exhibit a success”, said Jackson-Houston.

“It is vital to know one’s history and to share our stories.  Contact me if you are descendant of a Buffalo Soldier, I would love to hear your story and possibly add it to the exhibit”, said Jackson-Houston.

Commissioner Jackson-Houston is the Founder and President of the Nogales Buffalo Soldiers Legacy Association.  The mission of the association is to partner with schools and communities across the nation to educate, inform and highlight the notable accomplishments of the Buffalo Soldiers who served patriotically while subjected to oppressive and discriminatory conditions.

If you are a Buffalo Soldier descendant or would like additional information about the organization, contact Donna Jackson-Houston at www.NogalesBuffalosoldiers.org.