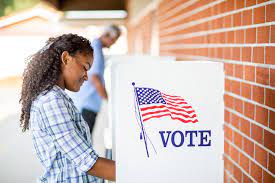 Sacramento, CA — The office of California Secretary of State Dr. Shirley N. Webber has qualified seven ballot initiatives for the November 8 statewide General Election. Seven is the lowest number of measures to appear on a statewide general election ballot since 2014.

One initiative is Senate Constitutional Amendment 10 (SCA 10). It is asking voters to safeguard a person’s right to reproductive freedom. To qualify for the November ballot, SCA 10 received the required 2/3 supermajority vote in each chamber of the Legislature.

The other six measures initiated by citizen groups are asking voters to decide on sports betting, funding K-12 art and music education, kidney dialysis clinic requirements, income tax to fund zero-emission vehicle projects, and a flavored tobacco products ban. To be on the ballot, the initiative proponents were required to gather a minimum of 623,212 signatures verified by county elections officials. June 30 was the deadline for the measures to qualify for the November ballot.

Two other measures could have qualified for the ballot but were withdrawn by their sponsors. An initiative to increase the cap on medical malpractice lawsuits was withdrawn when the sponsors reached agreement with the Legislature and Assembly Bill 35 by Assembly Majority Leader Eloise Gómez Reyes and State Senator Tom Umberg, was passed and signed by Gov. Newsom. An initiative to reduce plastic waste reduction was withdrawn after it was clear that Senate Bill 54 by State Sen. Ben Allen would pass. Gov. Gavin Newsom signed it into law in June.

Assembly Constitutional Amendment 3 (ACA 3), the California Abolition Act, which would have removed a clause in California’s Constitution that allows the practice of involuntary servitude as a means of punishing crime is not on the ballot because, while it passed the Assembly with the required 2/3 vote, it failed to get enough votes in the Senate.

Special interest groups have raised more than $370 million to convince voters to either pass or reject the initiatives. Over 88% of the money raised is for settling whether two sports betting proposals should be legalized.

The following are details on the fall ballot measures.

In response to the Supreme Court’s ruling to overturn federal protections for women seeking abortions, California lawmakers proposed a California Constitutional amendment to protect the reproductive freedom of women. Following the Supreme Court’s ruling, Gov. Newsom stated “Abortion is legal in California. It will remain that way. We will not cooperate with any states that attempt to prosecute women or doctors for receiving or providing reproductive care.”

Currently, sports’ betting online is illegal in California. This proposition would allow Californians 21 and older to place bets online through federally recognized Indian tribes and eligible businesses like Draft Kings and FanDuel. Prop 27 is estimated to increase state revenues by tens of millions of dollars yearly and potentially direct hundreds of millions of dollars in fee revenue to housing services for homeless Californians.

This proposition sponsored by former Los Angeles Unified School District superintendent Austin Butner would require the state to set aside $800 million to $1 billion annually beginning in 23-24 for arts education in school. A greater proportion of the funds would be allocated to schools serving more economically disadvantaged students.

This measure requires a physician, nurse practitioner, or physician assistant with six months’ relevant experience to be on site during treatment at outpatient kidney dialysis clinics. It authorizes an exemption for staffing shortages if a qualified medical professional is available through telehealth. Prop 29 prohibits clinics from closing or substantially reducing services without state approval and prohibits clinics from refusing to treat patients based on source of payment. This is the third attempt by SEIU United Health Workers West, a union representing over 100,000 health care workers and patients across the state, to pass the measure. Opponents of Prop 29 cite it would cost tens of millions of dollars annually for clinics to implement.

Individuals with a personal income of over $2 million would receive a tax increase of 1.75% to raise between $3 billion to $4.5 billion a year to fund greenhouse gas initiatives. A majority of the funds would go toward incentives for Californians to buy zero-emission vehicles and build new electric charging or hydrogen fueling stations. 25% of the funds would go toward wildfire fighting and prevention initiatives.

This proposition sponsored by the tobacco industry, aims to overturn Senate Bill 793 signed by Gov. Gavin Newsom in 2020 banning the sale of all flavored tobacco products. A “yes” vote keeps the law and a “no” vote overturns the law.

California ballot measures require only a simple majority of the votes cast to be approved.

As new initiatives enter circulation, fail, become eligible for, or qualify for an election ballot, the Secretary of State’s office will issue status updates.