Home > Statewide > California Commits $100 Million to Producing Its Own Insulin

California Commits $100 Million to Producing Its Own Insulin 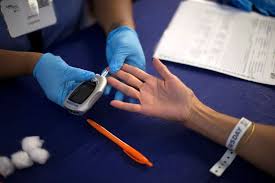 On July 7, Gov. Gavin Newsom announced that California will be the first state to produce its own insulin in an effort to drive down costs for diabetics statewide.

“On my first day in office, I signed an executive order to put California the path towards creating our own prescription drugs. And now it’s happening. California is going to make its own insulin,” Newsom stated.

Diabetes is recognized as the most expensive chronic condition in the U.S. According to data compiled by the Centers for Disease Control and Prevention (CDC), about 1 in 10 U.S. citizens live with diabetes, which is 8.8% of the planet’s known diabetes diagnoses, despite the U.S. only accounting for 4.25% of the world’s total population.

Black Americans are slightly overrepresented in the statistics. They are 15.5% of those diagnosed with diabetes while being roughly 13% of the nation’s population, according to the United Health Foundation. Black people are also 60% more likely to be diagnosed with diabetes, are 2.3 times more likely to be hospitalized for amputations associated with the disease and are twice as likely as Whites to die from it, according to the U.S. Department of Health and Human Services.

Dr. Karen Hansberger, the former Chief Medical Officer of the Inland Empire Health Plan (IEHP), explained that one of the reasons for the higher death rate for Black people with diabetes is they sometimes receive the diagnosis later in the disease progression, so by the time they see a doctor, some organs might already be damaged.

“Oftentimes, people of color don’t go to the doctor until their symptoms are really bad,” said Hansberger. “It’s harder for them to take off work and they face more difficulties when they do take off work.”

The American Diabetes Association (ADA) reports that 10.5% of California’s adult population has been diagnosed with diabetes with 16.9% of that number comprising Black adults. Black people represent about 6.5% of the state’s total population.

Californians with diabetes have been vocal about the high cost of insulin and state officials claim that monthly out-of-pocket costs for the life-saving drug can range from $300 to $500.

In 2018, insulin in the U.S. cost over 10 times more than in 32 other similarly developed countries, according to the U.S. Department of Health and Human Services.

“Nothing epitomizes market failures more than the cost of insulin,” Newsom said. “California is now taking matters into our own hands. The budget I just signed sets aside $100 million, so we can contract make our own insulin at a cheaper price close to at cost and to make it available to all.”

The budget is split in half with $50 million going toward developing insulin products and the other $50 million dedicated to creating an insulin manufacturing facility based in California, according to the governor.

Newsom claims that this initiative aims to cut the costs of insulin and insulin products by at least half. “It’s simple. People should not go into debt to get life-saving medication,” he said.

Dr. Hansberger agreed that this could bring costs down but has reservations about the state’s ability to produce insulin well.

“There is a shortage of insulin just in general so having more providers obviously reduces cost,” said Hansberger. “Producing it is one thing but producing it at a very high quality is the second piece of it.”

Hansberger believes that the government should invest more energy in diabetes prevention for people of color, as it can be difficult getting access to fresh food in some communities of color.

“When I was the Chief Medical Officer in East Los Angeles, we had one area – a housing project – that had been cut off by all of these freeways,” said Hansberger.  “And for them to get fresh food, they had to take a 2 ½ hour journey. It was ridiculous.”

“If the state of California is going to get into that business, they have to do that business well because people’s lives depend on it.”

However, she believes, in her experience, that governments “don’t necessarily do business well.”

Two other states, Washington and Maine have joined California, in establishing state-based efforts to disrupt the US pharmaceutical market and assure affordable and equitable access to essential medicines through public production. Each has passed legislation related to addressing insulin costs and access within their borders by having the state participate in manufacturing and distributing it.

On the national level, U.S. Senators Susan Collins (R-ME) and Jeanne Shaheen (D-NH) have introduced bipartisan legislation by way of the Improving Needed Safeguards for Users of Lifesaving Insulin Now (INSULIN) Act which would impose mandates on insulin providers and individual health insurance companies in the private sector to cap prices for products.

“The American Diabetes Association is proud to endorse the INSULIN Act introduced by Sens. Jeanne Shaheen and Susan Collins, legislation that stands to have a historic impact on the diabetes community by dramatically reducing the cost of insulin,” said ADA Chief Advocacy Officer Lisa Murdock during a press conference last month. “More than 37 million Americans have diabetes, and one-in-four insulin-dependent people with diabetes report rationing their insulin for economic reasons. We urge Congress to address the prohibitive and rising cost of insulin by passing the INSULIN Act.”