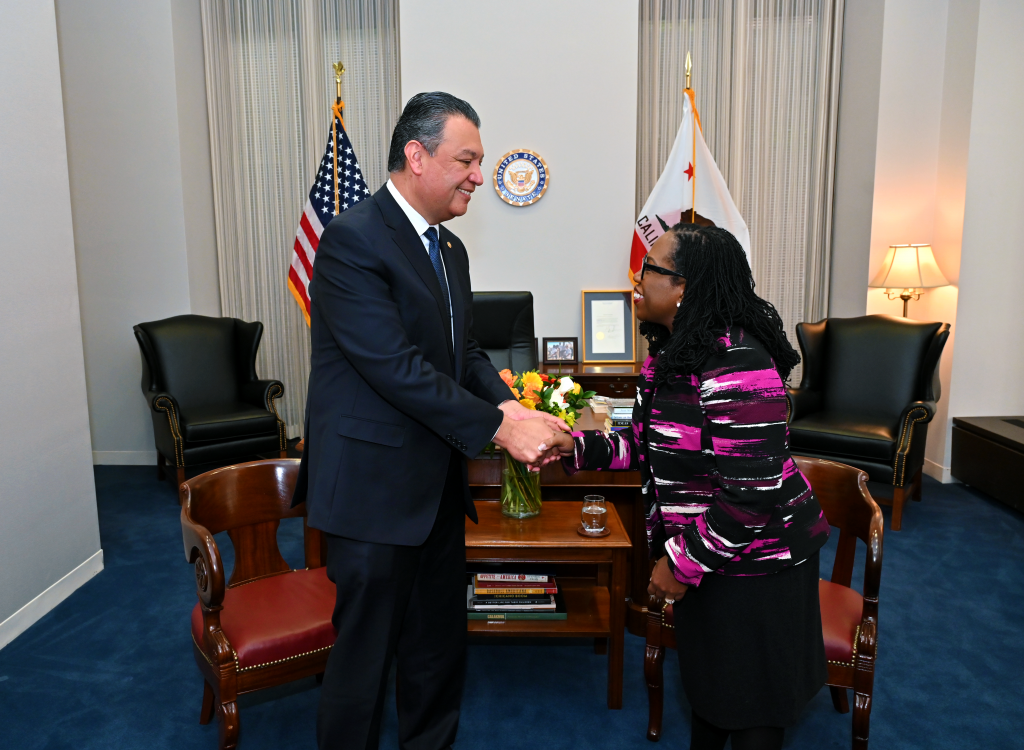 California’s junior United States Sen. Alex Padilla says he is as excited as he is honored to be serving on the Senate Committee on the Judiciary as he and his colleagues conduct hearings to confirm Judge Ketanji Brown Jackson, the first Black woman nominated to the United States Supreme Court in the judicial branch’s 233-year history.

On Feb. 25, President Joe Biden nominated Jackson, a Judge on the U.S. Court of Appeals for the D.C. Circuit, to become the 116th Justice on the highest court in the nation.

If Jackson is confirmed, she will replace Justice Stephen Breyer, one of her mentors, who announced his retirement in January.

“I’m honored to be sharing in this historic and significant moment in our nation’s history,” Padilla told California Black Media (CBM) in a telephone interview.

The first Latino to represent California in the upper house of the United States Congress, Padilla spoke with CBM while taking a short break from a daylong hearing March 23. During that session, lawmakers, Democrats and Republicans, cross examined Jackson.

“I am optimistic about Judge Jackson’s confirmation process. She is an outstanding nominee. She has the qualifications, and she has the experience,” Padilla continued. “If she is confirmed, she will bring a much-needed perspective to the Supreme Court.”

In January 2021, Gov. Gavin Newsom nominated Padilla to replace current Vice President Kamala Harris in the United States Senate. Before that, he served as Secretary of State of California for six years.

Jackson met with Padilla at his office at the U.S. Capitol prior to her confirmation hearings last week.

“I’m impressed by Judge Jackson’s commitment to the rule of law, her long record of public service, and her clear understanding of how the

Because of the even 50-50 split of Democrats and Republicans currently elected to the United States Senate, no one party has a majority of members on any committee. So, there are six members from both parties serving on the Committee on the Judiciary.

Padilla says the upcoming vote on Jackson presents an opportunity for members of the Committee on the Judiciary – and the Senate, more broadly — to put the extreme partisanship and rancor that has characterized the U.S. Congress in recent years behind them.

Last week, some Republican members of the Senate Committee on the Judiciary were questioned in the media about the truthfulness of some of their claims about Jackson and the overall nature and tenor of their questioning during the hearings.

For example, Sen. Josh Hawley (R-MO) portrayed Jackson as soft on sex offenders, calling up sentences she handed down in seven cases.

“Judge Jackson’s views on this matter are not only mainstream; they are correct in my view. Undoubtedly, Jackson — a progressive who worked as a criminal-defense lawyer — is more sympathetic to criminals than I am,” wrote Andrew McCarthy, a senior fellow at the conservative National Review Institute, disagreeing with Hawley’s assertion.

“If I were a judge, I’m sure I’d impose at least marginally more severe sentences than she has. (Contrary to Hawley’s suggestion, however, she appears to have followed the guidelines, at the low end of the sentencing range, as most judges do.),” McCarthy continued.

appeared to often be based on quotes taken out of context.”

Savage examined statements and accusations Blackburn made about Jackson on a range of issues, including parental rights, critical race theory, transgender athletes and criminal sentencing.

Before serving on the U.S. Court of Appeals, Jackson was a federal judge on the U.S. District Court of the District of Columbia and Vice Chair of the U.S. Sentencing Commission. She has also worked in private practice and as a clerk at the U.S. Supreme Court.

An alum of Harvard College, where she studied government, and Harvard Law School, where she was an editor of the Harvard Law Review, Jackson graduated from Palmetto Senior High School before that in Florida’s Miami-Dade County, where she grew up.

Jackson is close to her parents, Johnny and Ellery Brown and her brother, Ketajh Brown, a former Baltimore City police officer and soldier in the

Both of her parents, HBCU graduates, are educators (her dad is an attorney, too).

Jackson is married to surgeon Patrick Graves Jackson, who she met in college. The couple has two daughters. One of them, attending her mom’s hearings last week, was captured in photos watching the proceedings in rapt attention, beaming with pride.

Breaking barriers and being the first means not just significant opportunity, but also tremendous responsibility,” said Padilla in his opening statement last week when the hearings began.

“But Judge Jackson, I also know that you are equipped with a tremendous record of experience and accomplishment, and you are ready to blaze this trail,” Padilla continued. “Judge Jackson, even before your next opinion or dissent, your appearance before us today already begins a new chapter in our nation’s history.”