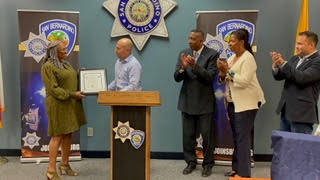 Former San Bernardino police officer Sherri Adams was recently honored for being the first African-American woman on the force. She was honored by the San Bernardino Police Historical Society, which presented her with a plaque. The plaque now hangs in the police department headquarters below a plaque honoring Johnnie Epps, the city’s first Black officer. Adams, a graduate of the San Bernardino County Sheriff’s Academy, joined the police department in 1985. She was highly recruited because of her youthful appearance, which enabled her to work undercover in narcotics in San Bernardino schools, much like in the movie “21 Jump Street.” “Being the first African American woman at the department was a significant accomplishment,” said Assistant Police Chief Francisco Hernandez during the ceremony that honored Adams. Adams admitted that being the first African-American woman on the force was a tough job. And she had to work hard to prove herself. She recalls she fought hard to be as tough as the men on the force and once fainted when she was on bike duty. During her years on the force, Adams received several citations, was nominated for Office of Year, and worked in various departments of the police force. She retired in 2001 and now works with at-risk youth for the county. She’s a mother of three and is married to a retired police officer.