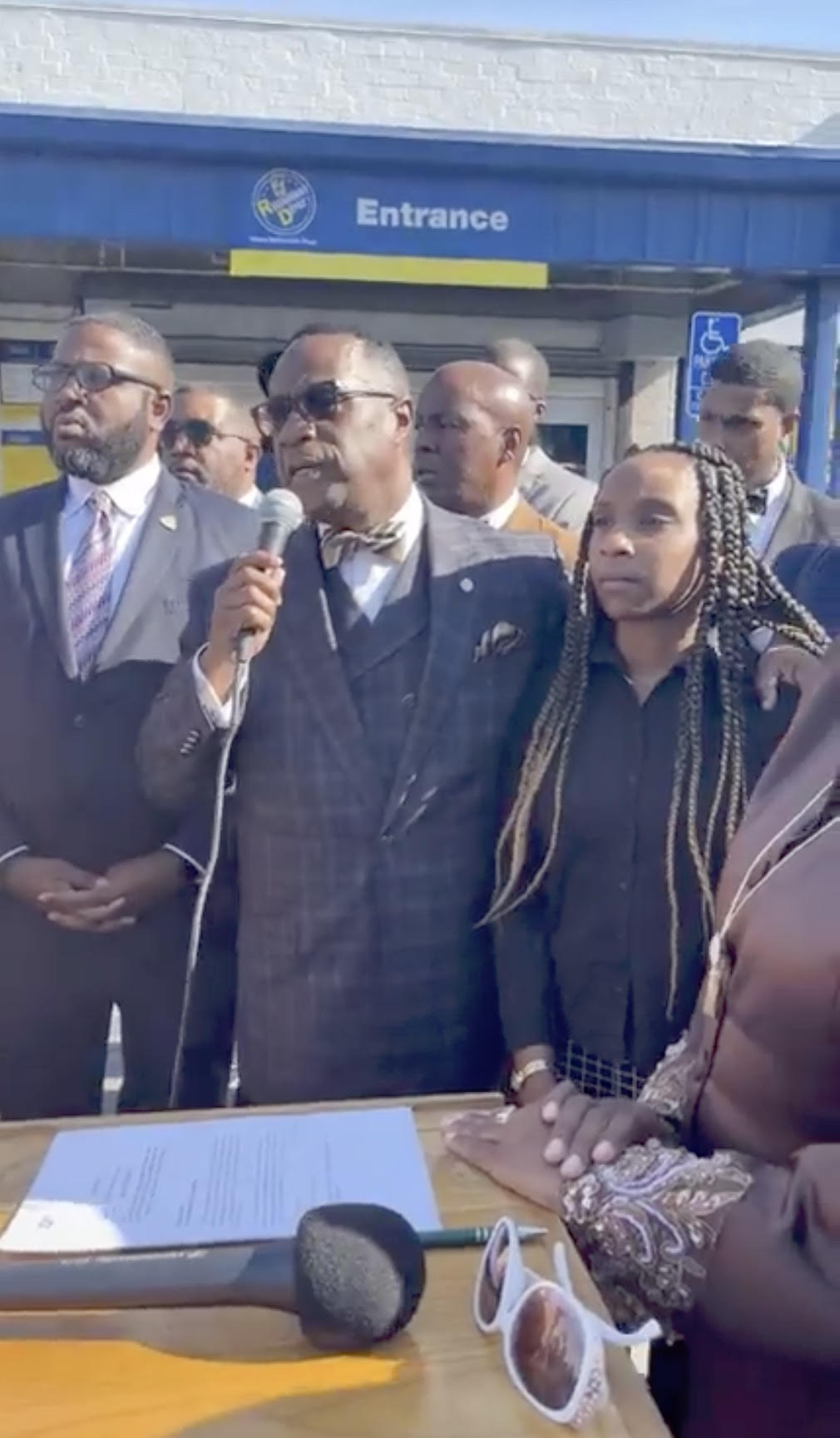 LOS ANGELES – About 200 protesters gathered on Nov. 24 at wholesale cash and carry foodservice supplier Restaurant Depot/Jetro in Culver City to demand justice for Passion Schoolfield, a single Black mother who was fired for expressing an opinion about Ye, the rapper also known as Kanye West.

According to Schoolfield, she was speaking with a customer in her cashier’s line about celebrities they like and was overheard by another customer when she said, “I like Ye. He keeps it real.”

Then, she says, a customer, a White male, got out of the check-out line, got in her face, and questioned her, “You like Ye?” After repeating this several times, he walked off and spoke with a manager. Moments later, she was suspended and the next day she was fired.

“This protest was a community effort to get justice for Passion, and what this focuses on is what we believe was anti-Black aggression against her for a basically ridiculous firing because she said she liked Kanye West. We really wanted to get that message out that there’s a line that was crossed,” stated Ludlow Cleary, II., Schoolfield’s attorney.

Schoolfield did not speak during the press conference. However, she told California Black Media that retail has been her career

since she was 18, and while working at Restaurant Depot, she loved the customers and the people.

The protest was called by the newly-formed, faith-based Grassroots Community Coalition Against Anti-Blackness (GCCAA). For now, they are demanding compensation for stress caused to Schoolfield and her children, particularly her two autistic sons, “Blackness Sensitivity” training – not diversity training — they emphasized and revising the company’s employment policy.

“Black Jobs Matter and no one will be able to get in here to buy (nothing) from Jetro Restaurant Depot until my sister gets justice, until Passion gets her job back. She has the right to her job to take care of her family,” stated Nation of Islam Western Region Representative Abdul Malik Sayyid Muhammad (formerly known as Tony Muhammad).

“She poses no threat to anybody. We in the Nation of Islam believe that a nation can rise no higher than its woman and that when you attack a woman, you attack a nation,” he stated.

Muhammad, who is also the student minister of Muhammad Mosque #27, issued the GCCAA’s 48-hour demand for a response during the press conference and protest.

“This is a Rosa Parks moment. We’re living in a cancel culture, but it looks like that cancel culture is directed at Black people with consciousness,” he stated. “And any of us who desire to stand up and be conscious and support one another, there seems

to be a system in place that’s telling us we can’t do that,” he said.

Ralph Vasquez, manager of the Restaurant Depot Store, gave no comment when asked about Schoolfield’s termination and the protest. No response has been received yet from Restaurant Depot’s corporate and West Coast regional offices.

“There are people in our world that have done worse things than Kanye, that get voted into office, and people never lose their job for supporting them,” said Ryan Sims, pastor of Revelation Church of God in Christ.

As a father, Sims said, no one would want their child, wife, aunt, mother, or even their cousin, to go through what Schoolfield has endured. As a community, big brothers and sisters, they are standing with her, he said.

Schoolfield is that kind and engaging worker behind the counter that’s attentive to their customers, said Anthony “Shep” Crawford, senior pastor of the Experience Christian Ministries Church. “And in that conversation, someone overhears it, gets offended, tries to bully her … and once she answers the questions, he asks her again. I do not like that. We do not like that, but she stood her ground,” he stated.

Her mistreatment is about a corrupt system, not a rogue manager, he said, pointing to the store’s entrance. “We will not have it. We will not stand for it. You have here, present today, Muslims, Christians, Baptists, Church of God in Christ, community mothers…even law enforcement, here to stand,” said Crawford.

Many who turned out to support Schoolfield felt she was unjustly fired. Some offered donations for the young mother of three who is now unemployed and may be unable to apply for unemployment benefits.

“We’re standing here for Passion because what took place here at Restaurant Depot is unjust,” stated Reverend K.W. Tulloss, president of the Baptist Minister’s Conference of Los Angeles and member of the National Action Network. “What Jetro did was wrong! And we want to make this wrong a right,” he said.

The GCCAA has set up a GoFundMe page, which so far has raised $2,000 to help Schoolfield pay rent and feed her children.

They intend to interrupt the economy of Restaurant Depot/Jetro, said Bishop Craig Worsham, founder and Sr. Pastor of The Agape Church of Los Angeles.

He challenged all present at the protest to stand united in that cause until Restaurant Depot comes to the table with a reasonable resolution.

“There are African American-owned restaurants, catering companies, churches that dump hundreds of thousands up to

Other organizations present were Asians with Attitude and Second Call Gang Intervention and Prevention. She has a right to express her opinion about a public figure, they said.