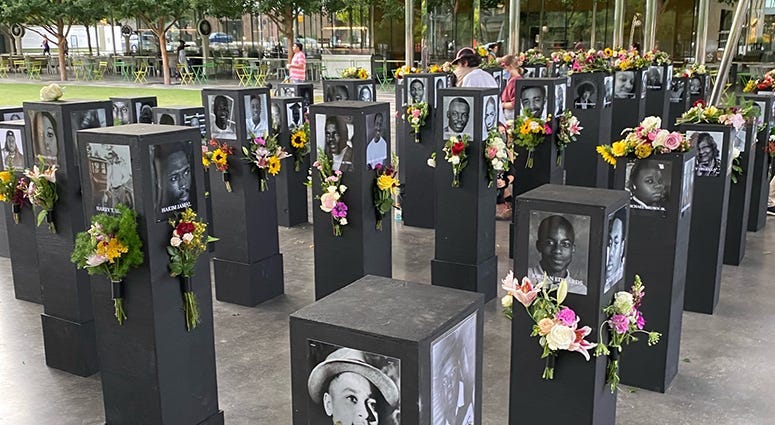 The San Diego African American Museum of Fine Art (SDAAMFA) will unveil the “Say Their Names” Memorial exhibit (Memorial) at its ribbon cutting ceremony on Saturday, July 10, 2010, at 11:00 am.  The location of the exhibit is in the M.L. King Promenade at the New Children’s Museum Park (200 w. Island Avenue) and is free to the public. The Memorial features 200 photos of Black victims, whose lives were lost due to racial injustice, police brutality and/ or racism. The exhibit will be open and accessible daily from July 10-July 25, 2021.

The “Say their Names “Memorial is a nationwide, grassroots initiative to honor Black lives lost in the struggle against systemic racism. The memorial began in Portland, Oregon and is an outgrowth of the protests that began nationwide in 2020.  The informal outcry is now an organization called “Say Their Names Memorial” The organization would like to make sure that we never forget the victims and that we actually put a face to a name. “This is definitely a teachable moment for all of us. We invite you to come, reflect and think about what you can do to make a difference.” stated Gaidi Finnie, Executive Director of SDAAMFA. Specific to San Diego, we remember the life of Demetre DuBose who died in August of 1999 in a police involved shooting.

The exhibit will also recognize San Diego’s local civil rights advocates who worked to level the playing field in San Diego. While the exhibit has been shown in over 25 cities from Hollywood California to Boston Massachusetts, this is the first “Say Their Names” exhibit south of Los Angeles County.