Ashanti’s New Song Gets Better the More You Drink Water 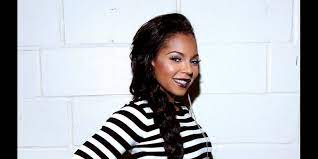 Have you ever listened to a song that gets better over time?

Well, that’s the motivation behind the promo for Ashanti’s new single, “Let’s Go.” The princess of R&B has teamed up with First Lady Michelle Obama’s Partnership for a Healthier America and its Drink Up effort to push her newest single.

So, how exactly does it work? As fans tweet using the hashtag #DrinkUpAshanti, what first appeared as a low-fi, black and white video will become more vivid and colorful with increasingly better sound and imagery with each tweet. Fans are encouraged to hydrate the song (with more tweets) until it is completely ready for release. All of this in hopes to get people drinking more water.

“With their hard work and creativity, groups like Drink Up have encouraged people across the country to drink more water, and they have helped increase demand for — and sales of — healthier products,” the first lady said about the initiative. “From talking fountains to surfing competitions and now through partnerships with artists like Ashanti, Drink Up is proving that if we promote healthier options in fun and exciting ways, and make those options affordable and accessible for families, we can continue to make the healthy choice the easy choice.”

With both an audio and video component to the promotion, fans can visit drinkupshanti.com to actually see what part of the song and video they have helped bring to life.

“I love that my song is being used to encourage people to make a really easy choice: drinking more water every day,” Ashanti said. “It’s even more rewarding when it’s being done in a creative, positive way. Drinking water is in … it’s just cool and sexy. You are what you drink, so drink up.”

The song will be released in four phases, from dehydrated to hydrated. Using the hashtag, the fans will see the song fill up little by little until it’s finally released on iTunes, according to the Partnership for a Healthier America (PHA).

“This collaboration with Ashanti is a whole new way for a brand and an artist to work together, and we are looking forward to seeing how quickly Ashanti’s fans can make her newest single drop,” said Drew Nannis, PHA’s chief marketing officer.