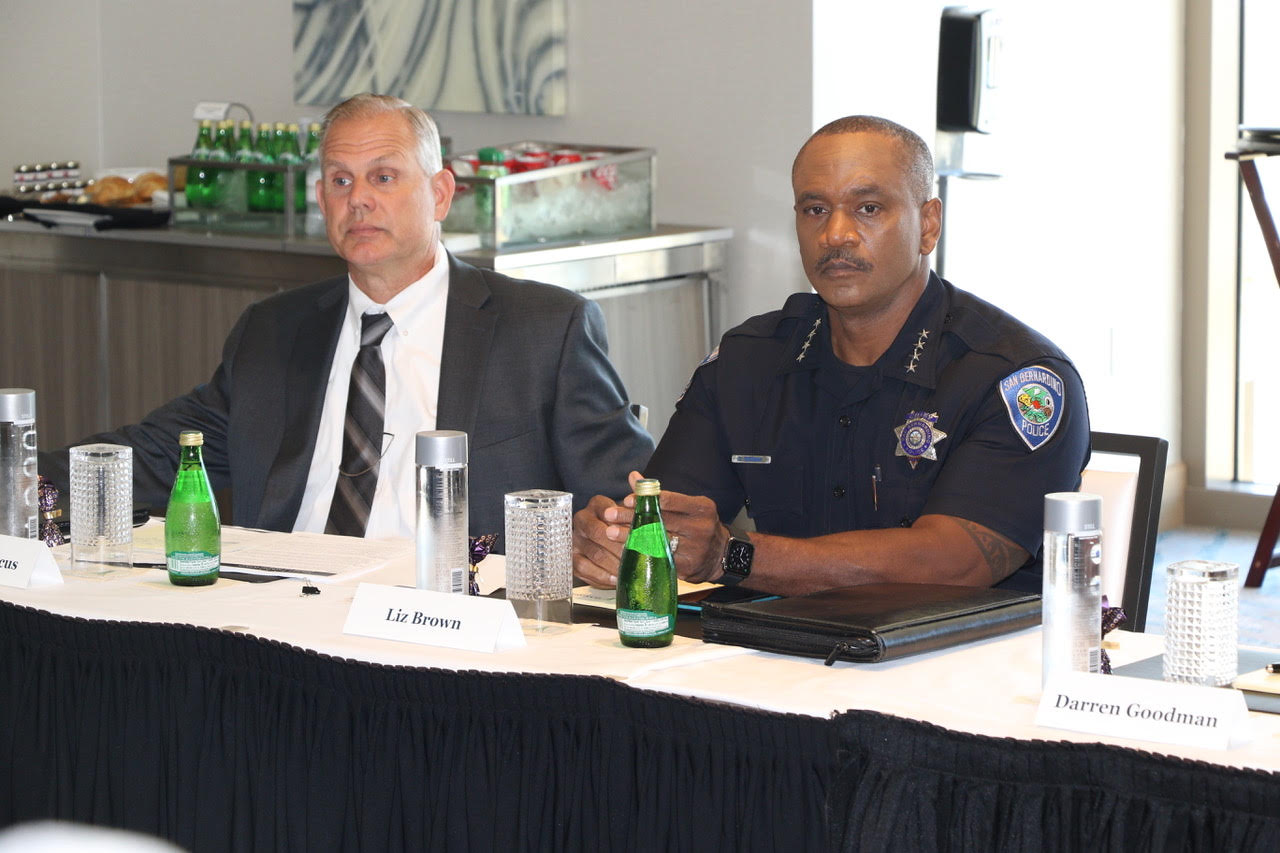 Don English, Director of Children Deserve Success for San Bernardino County Superintendent of Schools, and an educator for 28 years, said, “Today was really about emphasizing the importance of attendance.”

He was referring to the school district’s work around chronic absenteeism in schools and disciplinary action that removes students from their usual classroom setting.

English said, during the pandemic, kids missing school hit a high of 30 %. So, he saw the event as an opportunity to highlight the need for more resources with the state’s legislative leadership in Sacramento/

The newly hired San Bernardino City Police Chief Darren Goodman expressed that the police department is working to overcome the challenges it faces to ensure it has all the tools and resources it needs to protect the community.

From schools to businesses and religious places to government offices, Goodman says all aspects of his local community rely on public safety.

As of last week, “San Bernardino had approximately 48 murders for the year” to date. He expressed that people did not feel safe, and he wants to improve that.

One obstacle Goodman cited challenging his department is that it is short-staffed. But followed up that all agencies are experiencing hiring challenges.

Goodman explained after “two and a half years of demonizing the police, recruitment efforts hiring and retaining officers have been difficult,” but he believes to turn some of that around, the agency will have to repair relationships with the community. So not only does the community need to support law enforcement, but they also need to get that same support from the state.

He stressed the need for more tools and updated equipment that will help the department be proactive to threats and be prepared when citizens call it for help.

“There is software that we don’t have that we would love to have that would give us the ability to monitor social media and assess the threats that are going on in the community,” said Goodman.

He referenced some of the recent mass shootings and the San Bernardino 2015 terrorist attack. He pointed out that most —   if not all perpetrators — were discussing what they were going to do on social media before committing the violent acts.

Dr. Gwen Dowdy Rodgers, a member of the San Bernardino Unified School District, was also in attendance and shared her wish list for the school district.

“Today was important for me to speak to the Speaker and the Assemblymember regarding wellness centers that we needed. These centers would have a separate place where our students and the community have access to academic, counseling, and wellness spaces.”

“We are asking for more dollars for buildings, and secondly, we are looking at the late start bill [‘preferencing SB 328 that now mandates that middle and high schools cannot start school earlier than 8:00 a.m.)  and will need more funding for transportation which connects to safety, but we need funding because transportation is very, very, very expensive,” said Rodgers.

Rendon shared he was familiar with a lot of these issues relating to funding and lack of coordination with services. He expressed his gratitude and applauded Assemblymember Ramos for bringing legislative leadership and the community together to help bring awareness and attention to the issues of the 14th Assembly District.

Rendon said that most of his tenure in the Assembly has been dominated by action and policy around COVID, but Ramos has asked him to come to the district twice.

Ramos believes it’s important that when someone comes to his district, they hear from the people on the ground providing the services and who have their nose to the ground.

“That says a lot about what he cares about when he goes to Sacramento; when he enters the chambers, you are in the chambers; when he is asking for budget requests, it’s driven by the requests from the community,” said Rendon.

The Speaker said, “I am going to follow up on a lot of these items to make sure we are addressing them.”