Opinion: What California Is Learning from Expanding Voters Rights 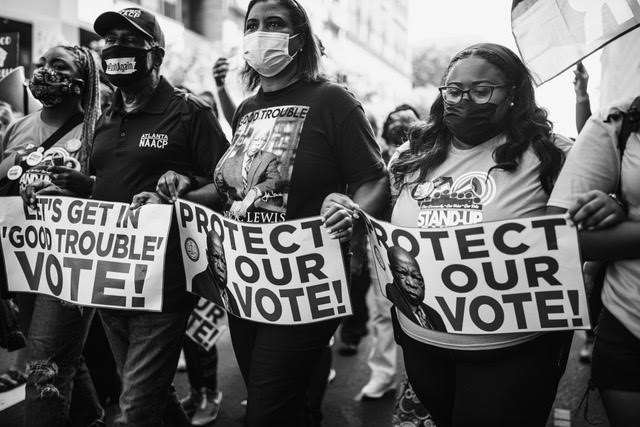 There are two contests for U.S. Senate on the ballot. One is for a full six-year term ending Jan. 3, 2029. The other is for the remainder of the term that Sen. Alex Padilla (D-CA) has been serving in place of V.P. Kamala Harris that ends Jan. 3, 2023.

Mail-in ballot voting has been underway since the second week in May. Assembly Bill 37, signed into law by Gov. Gavin Newsom in 2021, requires the state to send vote-by-mail (VBM) ballots to every registered voter in the state. The law applies to all elections held after Jan. 1, 2022.

Ballots are sent 29 days before the election, which was May 9 for the primary. For the November General Election, voters will start receiving ballots Oct. 10.

A majority of California voters live in counties that have adopted the Voter’s Choice Act (VCA) system. In 2016, Senate Bill 450 created the VCA, an election model that expands voters’ options for how, when and where they can cast their ballots in an attempt to provide more accessible voting options. VBM ballots are provided with a postage paid return envelope. For a ballot to count in the upcoming primary election, it must be postmarked on or before election day and received by June 14, 2022. It can also be dropped off in-person to a secure ballot drop box, a voting location or county elections office by 8:00 p.m. on June 7, 2022.

The VCA is an optional law. Counties elect if they want to adopt it. In 2018, five counties adopted the new law: Madera, Napa, Nevada, Sacramento and San Mateo. In 2020, nine additional counties changed their election models to the VCA: Amador, Butte, Calaveras, El Dorado, Fresno, Los Angeles, Mariposa, Orange, Santa Clara, and Tuolumne. In 2022, the number of counties that have transitioned to the VCA grew to 28 with the addition of Alameda, Kings, Marin, Merced, Riverside, San Benito, San Diego, Santa Cruz, Sonoma, Stanislaus, Ventura, and Yolo counties.

In VCA counties, early in-person voting begins as early as May 28. Voters can vote at any county vote center instead of being assigned to a neighborhood polling place. The vote centers are open four to ten days prior to the election, including weekends. They serve as one-stop shops with accessible voting machines – venues where voters can drop off their VBM ballot, receive a replacement ballot, register to vote, and get help with voting material in multiple languages.

Unregistered voters who miss the close of registration on May 23 will be able to conditionally register to vote at any vote center and cast a provisional ballot through the end of Election Day.

When California policymakers and election officials proposed the Voter’s Choice Act most proponents applauded its benefits, including lowering election administration costs, providing greater convenience and flexibility for voters, and the potential to improve voter turnout.

Recently, California Secretary of State (SOS) Shirley Weber released a report on the implementation of VCA during the 2020 Primary and General Elections.

Key findings of the report include:

VCA counties had higher voter registration rates in the state. The 15 VCA counties accounted for about half of the state’s registered voters in both elections.

Many VCA counties experienced a higher voter turnout compared to their non-VCA counterparts. Turnout in the 2020 General Election across racial groups showed White voters had a higher overall turnout than their non-White counterparts. The voter

turnout gap for Black voters was 5.2 points, and AAPI voters had a turnout gap of 4.3 points.

Black and AAPI voters turned out at similar rates as the VCA counties’ average, and Latino voters used in-person voting most among all races and ethnicities.

Use of vote-by-mail ballots was the primary choice of voting in the 2020 elections. More voters chose to return their ballot by drop box than by mail. Use of drop boxes decreased after the age of 45 in the Primary Election and age 35 in the General Election.

Voters in VCA counties cast a ballot in-person at a higher rate than voters in non-VCA counties in the General Election (55.1%). For the Primary Election, that number was 46.6%.

Provisional ballot use decreased significantly between the Primary and General Elections.

There were no confirmed instances of voter fraud in both the Primary and General elections in 2020.

SOS’s Recommendations based on the report findings:

Continue to work with counties to ensure drop box locations are accessible and convenient to the public.

Increase outreach and education about early in-person voting and other voting options available in VCA counties.

“We have taken away every excuse a person can possibly have as to why they won’t vote,” SOS Weber said recently. “People realize this is going to be easy and it’s comfortable.”