Home > Education > “No Going Back”: Scholars Say Lives of Black Californians Must Improve After COVID

“No Going Back”: Scholars Say Lives of Black Californians Must Improve After COVID 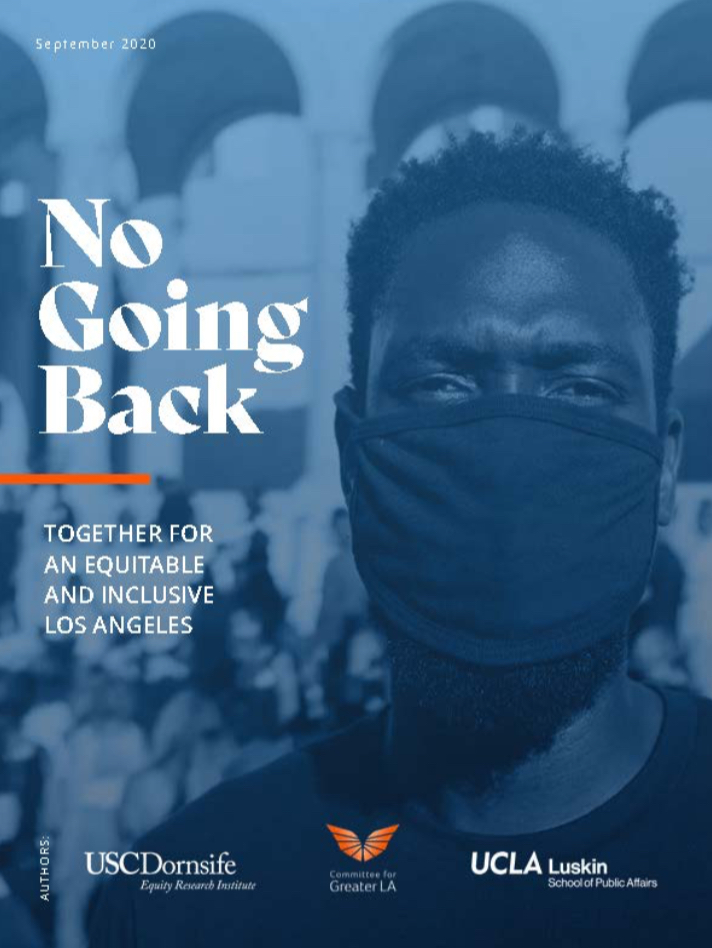 Los Angeles, CA — With most of the conversation around the COVID-19 pandemic focused on relief within the next few months, some activists and researchers are looking to the future, asking: What should “back to normal” look like for Black Californians?

“No Going Back” is an independent report presented by the Committee for Greater LA, the University of Southern California’s (USC) Equity Research Institute, and the University of California Los Angles’ (UCLA) Luskin School of Public Affairs. The study offers dozens of policy recommendations to ensure equal access to all Los Angeles residents, regardless of race or immigration status post-COVID. The report is comprised of 15 chapters covering multiple policy areas, including housing and homelessness, economic development, public health and education.

“COVID is the disease that has revealed our social illnesses of anti-Black racism; precarious employment; sharp racial gaps in wealth and digital access; unaffordable housing; growing homelessness; unresponsive government; and so much more,” the “No Going Back” report’s executive summary reads.

Although the study focuses on LA, where the majority of African Americans in California live, some parallels can be drawn with other metropolitan areas across the state where large numbers of Black Californians also call home. The African American population in Los Angeles County alone is larger than the total of the next top 10 metro areas ranked by their Black populations combined.

Based on the data they gathered for the study, the USC and UCLA researchers discovered that Blacks are still discriminated against in most areas of public life.

The policy section titled “Improving Black Life in Los Angeles” includes a sketch of African American history in California’s largest metropolitan area that acknowledges the impact Black people have had on Los Angeles County, and the conditions of inequality that keeps Black households from acquiring wealth. The report cites low incomes, high unemployment, discrimination in labor and discriminatory real estate practices as contributing factors. The COVID-19 pandemic has exacerbated all of those things.

The report also asserts that death rates from COVID-19 for Black Angelenos, which is double that for White Angelenos, are highly influenced by “poverty, poor food quality, lack of park access, and job characteristics that reflect patterns of structural racism.”

One concrete recommendation regarding public safety for Black Californians is passing and implementing the BREATHE Act, a federal proposal that a collection of organizations under the “Movement for Black Lives” umbrella authored. The legislation calls for a “time-bound” plan to close all federal prisons and immigration detention centers, ban police departments from using surveillance and military grade weapons, and redirects funds from policing and incarceration to social-welfare, education, healthcare and environmental programs.

“We cannot go back to an old “normal” that has failed so many. There is no return to a system that is over-policed and over- incarcerated. We should have no nostalgia for an economy that did not reward truly essential workers such as agricultural laborers, grocery store clerks, truck drivers, elder care specialists, and others. We should hold no affection for a system that has long stripped assets from communities through discrimination and redlining rather than built them up through public and private investments,” reads the “No Going Back” executive summary.

The Committee for Greater LA and its research and philanthropy partners presented a preview of the report to the Los Angeles City Council’s Ad Hoc Committee on COVID-19 Recovery and Neighborhood Investment at their first meeting last June. At a kickoff event for the “No Going Back” report, the advocates also expressed their desire for policymakers and philanthropists to see their findings.

“As Martin Luther King once said, ‘injustice anywhere is a threat to justice everywhere.’ We, I mean all of us, are in a moment of reckoning. We not only have to do the talk and listening, but we must take bold actions to include everyone as we move forward as a country, a state, a county, a city,” said Committee for Greater LA Steering Committee member Jacqueline Waggoner.

“We have an extraordinary opening right now,” she continued. “This is a wake-up call to stand in solidarity with one another, value Black lives, treasure immigrant families and declare homelessness unacceptable.”