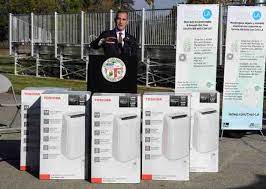 Los Angeles, CA — Some new programs offered by Los Angeles Mayor Eric Garcetti are an indicator of how seriously California politicians are taking the climate crisis.

According to a press release, L.A. residents can apply for rebates to purchase energy-efficient air-conditioners. Low-income customers can receive rebates between $75-$225 through the Cool LA initiative.

Another program allows residents to space out energy costs over a period of a year.

These programs are much needed in Los Angeles as California is facing increasing heat because of climate change. This year the state of California saw some of the hottest recorded temperatures in history. Death Valley reached a record 125° this year.

Faced with these kinds of problems, Garcetti said he’s tackling the problem head on.

“The impacts of the climate emergency are on our doorstep, and as we continue our work to make Los Angeles a carbon-neutral city, we can’t wait to bring solutions to people on the front lines of this crisis today,” said Garcetti. “Cool LA will bring needed relief from the heat to over a quarter million of our most vulnerable Angelenos – and is the latest step in our work to ensure communities bearing the brunt of climate change get immediate support.”

According to a press release, about 230,000 L.A. residents will be eligible for the program. For more information, go to ladwp.com/cool-la.

However, this is just one of several programs that Garcetti has implemented to deal with increasing temperatures. He has also added program such as planting more trees, adding more cool pavements and shaded bus stops.

L.A. plans to install more than 60,000 cool roofs as part of a city ordinance. The city has also planted 65,000 trees over the past three years.

The California Climate Commitment will invest $54 billion in climate change.

Some of Newsom’s other climate change programs include:

The Golden State also plans to phase out the sale of new gasoline-powered cars by 2035.

Newsom said he was motivated by extreme weather such as wildfires and soaring temperatures.

“This month has been a wake-up call for all of us that later is too late to act on climate change. California isn’t waiting anymore,” said Newsom. “Together with the Legislature, California is taking the most aggressive action on climate our nation has ever seen. We’re cleaning the air we breathe, holding the big polluters accountable, and ushering in a new era for clean energy. That’s climate action done the California Way – and we’re not only doubling down, we’re just getting started.”