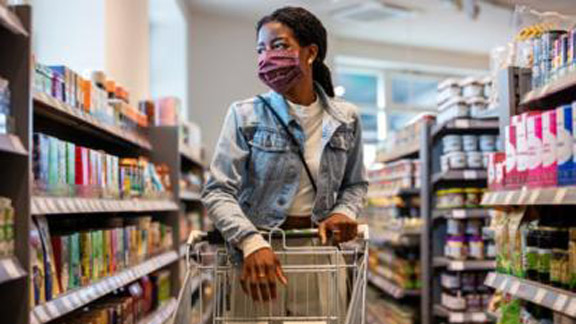 Los Angeles, CA — California is following the Center for Disease Control and loosening up the rules on mask usage. The new rules are happening as more people receive the coronavirus vaccine.

“COVID-19 cases continue to fall across the United States as more of the population becomes vaccinated. Nearly half of U.S. residents have received at least one vaccine dose, and the number testing positive each day has fallen below 40,000 for the first time since September,” said Democracy Now!

According to the new regulations, people don’t have to wear masks, if they are outside and not around a group of people.

But the CDC still recommends keeping masks on during indoor dining.

“CDC recommends wearing a mask while dining in a restaurant, particularly indoors and when speaking with restaurant workers and servers, except when actively eating or drinking. The risk of COVID-19 spread increases in a restaurant or bar setting as interactions within 6 feet of others increase. Masks may reduce the risk of COVID-19 spread when worn in any of these risk scenarios,” according to the agency’s website.

Covid numbers are trending down in Los Angeles County. According to the Department of Public Health’s May 9 data, only 248 tested positive and five people died from the disease. As of Sunday, the positivity rate was 17 percent.

Apart from the vaccine role out, preventative measures such as washing hands and masking have worked to slow the disease.

Dr. Anthony Fauci, the nation’s leading virologist, suggested that mask-wearing might become a regular exercise to reduce seasonal diseases such as the flu.

“We’ve had practically a non-existent flu season this year merely because people were doing the kinds of public health things that were directed predominately against COVID-19,” said Fauci, during an interview with “Meet the Press.” “So it is conceivable that as we go on a year or two or more from now that during certain seasonal periods when you have respiratory borne viruses like the flu, people might actually elect to wear masks to diminish the likelihood that you’ll spread these respiratory borne diseases.”

However, Fauci still remains a controversial figure on the right, where many see his mask advice as restricting personal freedom. Many right-wingers have tied Fauci to conspiracy theories about the coronavirus being created in a Chinese lab. He was again faced with this question during a recent Senate hearing.

Sen. Rand Paul, who is a self-licensed dentist, accused Fauci of covering up being involved in funding a lab in Wuhan, China that was experimenting with the virus. This is an unfounded conspiracy theory.

Fauci responded by saying, “With all due respect, you are entirely and completely incorrect that the NIH has not ever and does not now fund gain of function research in that institute.”

FOX News conspiracy theorist Tucker Carlson is demanding that Fauci face a criminal investigation for ‘letting the coronavirus happen.” However, it was Republican President Donald Trump who ignored the pandemic and let more than 500,000 Americans die.

Carlson has also questioned the efficacy of vaccines. On Monday, Twitter users demanded that Carlson reveal if he has received the vaccine, even as he encourages other people not to take it.

While Carlson and other right-wing media stars have downplayed masking and vaccines, many of them are taking the coronavirus pandemic seriously.

“Rupert Murdoch, the 90-year-old Fox News cofounder and executive chairman of News Corp, received the vaccine at his local doctor’s office in Britain back in December. Conversely, a number of Fox News personalities have been public about encouraging vaccinations and getting their own in recent months, including The Five cohost Jesse Watters, America’s Newsroom anchors Bill Hemmer and Dana Perino, Special Report anchor Bret Baier, and the network’s senior meteorologist Janice Dean—despite the fact that vaccine selfies from right-wing media stars are often bombarded with criticism,” according to Vanity Fair.