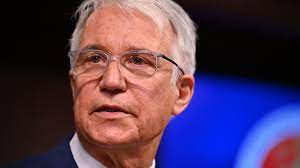 However, Gascon is currently facing a recall effort. This is the second recall effort against him. The first one, launched in September, failed when it didn’t get enough votes. The second one began in December. The recall effort needs to gather more than 560,000 signatures by July 6, to get on the ballot.

Gascon, who was previously San Francisco DA, has raised the ire of several Los Angeles residents because of his progressive policies. He came into the office on a mission of approaching the criminal justice system from a more progressive point of view. Gascon wants to do away with issues such as racist drug laws and the cash bail system. He has also moved to avoid prosecuting criminals for low-level crimes.

Gascon said he was trying to fix a broken criminal justice system.

“We are trying to dramatically change a system that has served no one, not the victims of crime, not those who are accused and not the public,” said Gascon in an interview with ABC 7.

However, Gascon’s opponents say that his liberal policies are letting criminals return to the streets. They claim these policies are responsible for rising crime. However, crime has gone up across the country.

In an interview with a local TV news station, Gascon said crime has been going up in the LA area for quite a while.

“The reality is crime has been going up, in fact, in L.A. County we had a 25% increase in violent crime over the last seven years because we continue to do the same things over and over again, expecting different results,” said Gascon talking to KTLA 5.

But his opponents say Gascon is coddling criminals and ignoring the victims of crime.

Gascon defeated former LA County DA Jackie Lacey in November 2020. Lacey became unpopular for her failure to prosecute police officers for the shooting deaths of African American citizens. At one-point, local activists even went to Lacey’s home to stage a protest where they were met by her husband who brandished a gun.

However, Gascon has the backing of some civil rights leaders.

“The campaign to oust Gascon is nothing but a thinly veiled right-wing effort to sabotage Gascon’s much needed criminal justice reforms,” said writer and activist Earl Ofari Hutchinson, who has launched a Change petition to support Gascon.