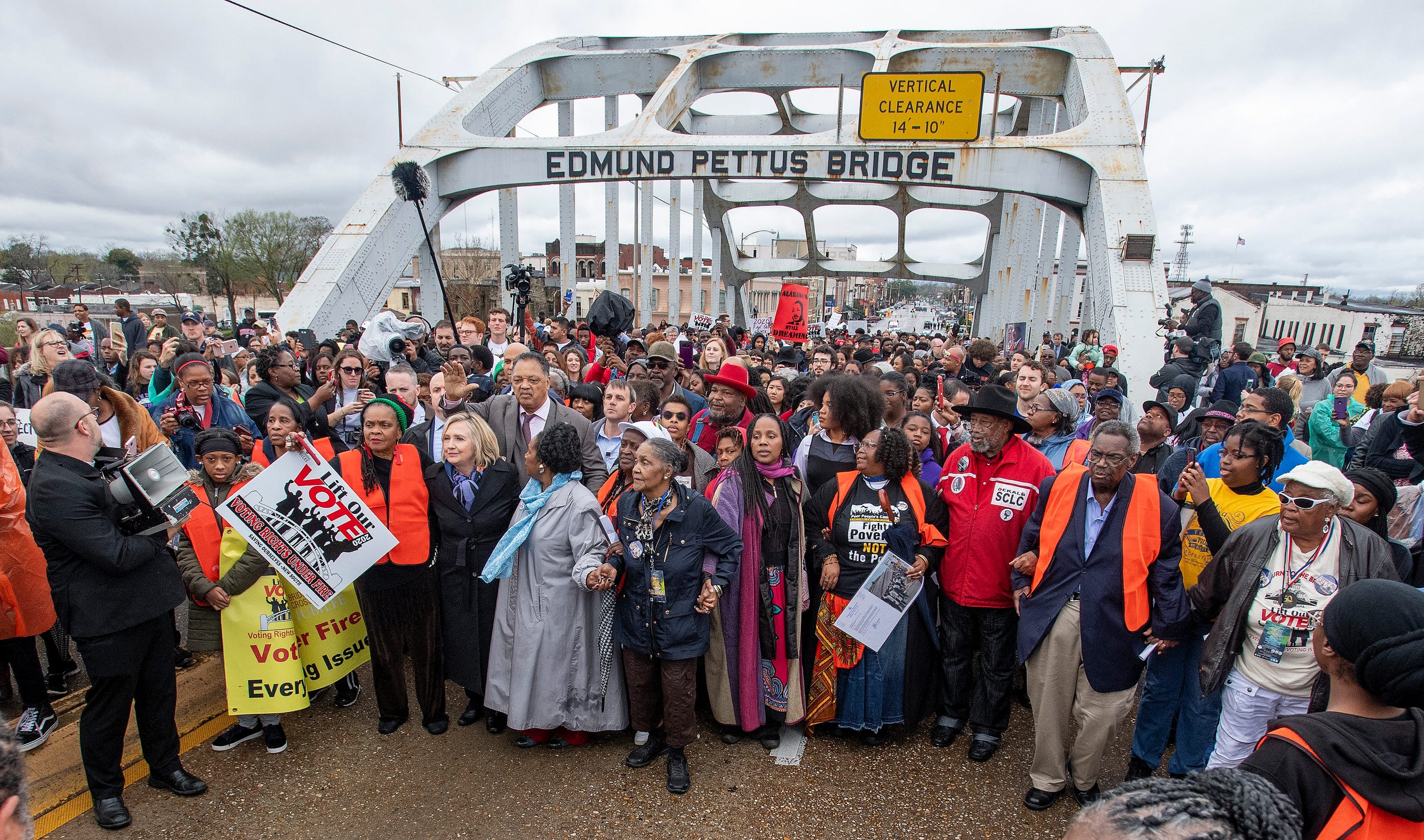 The annual march, fronted by black women leaders, drew thousands of people – some who had witnessed the original marches.

John Lewis, who was recently diagnosed with pancreatic cancer, made a surprise appearance on the Edmund Pettus Bridge in Selma, Alabama as thousands marched to commemorate Bloody Sunday, when the civil rights activists faced a brutal police force while marching for voting rights.

Lewis, who led the march in 1965, was beaten that day, and left with a fractured skull and concussion.

The annual march this year drew thousands of people and was led by black women – activists who witnessed Bloody Sunday, elected officials, and members of the major black sororities. The jubilee, as it is called, was alive with marching band drummers and Martin Luther King Jr speeches broadcasted over speakers and groups holding banners as they walked in unison across the bridge.

Also marching at the front were presidential candidates Elizabeth Warren and Amy Klobuchar and Pete Buttigieg, who announced he was dropping out of the race today. Vice president Joe Biden, Tom Steyer (who dropped out of the race yesterday) and Mike Bloomberg also attended the day’s events.

“It’s the perfect time. It’s the 100th year for us getting our right to vote as women, not necessarily African American women,” said LaWanda Harper, regional director of the Zeta Phi Beta sorority. “We know that though were not at the forefront we were an integral part of the process.”

Jurys Sims, a freshman at Tuskeegee University who was holding a Bernie Sanders sign, agreed. “The energy of the city made me come here, and just to experience history,” he said. “And at this moment of 2020 election, just looking at all of our presidential candidates.”

One of the people who marched on Sunday was Melinda Mims, who drove to Selma from Autaugaville, about 20 minutes away. She estimated she had marched over the bridge about a dozen times before.

“Sometimes you get weary sometimes and you have to get renewed.” she said. Mims attended the march with her young nephew and members of her church because she wants to train the next generation about the importance of fighting for voting and civil rights.

There were also dozens of people on the bridge who, like Lewis, had witnessed the original Selma marches and were back to retrace their footsteps.

Fifty-five years after he stood on the Edmund Pettus Bridge after Bloody Sunday, Charles Neblett stood there again. “It brings back the licks of those clubs and that tear gas,” he said as he stood on the side of the bridge

Neblett, who said he doesn’t talk about Bloody Sunday that often, still thinks about the guilt he felt at not being able to help more people. Still, he said he comes back each year to commemorate the bridge crossing.

“As long as they remember this, they can learn more about what it was like then. And what people were trying to do and what you have to do.”