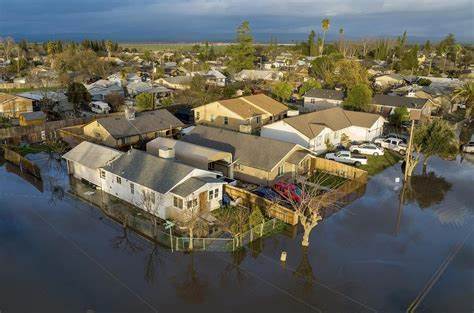 By MICHAEL PHILLIS and ADAM BEAM

ACAMPO, Calif. (AP) — On Sunday morning, Kyle Starks woke up to floodwaters that reached the door of his Jeep after yet another heavy rain storm drenched California. Emergency crews showed up with boats to float Starks and other residents of his rural mobile home park in Acampo to safety.

Beyond the physical destruction, the storm could pack a financial hit: Starks does not have flood insurance.

“I didn’t think it would flood this bad,” he explained from an evacuation center, worried that water damaged wiring and air conditioning equipment.

In California, only about 230,000 homes and other buildings have flood insurance policies, which are separate from homeowners insurance. That means only about 2% of properties are covered against flooding. The federal government is the insurer for the bulk of them – about 191,000 as of December. Private insurers issued the rest, according to the most recent state data from 2021.

In California, 32 trillion gallons of rain and snow fell since Christmas. The water washed out roads, knocked out power and created mudslides by soaking wildfire-charred hills. It caused damage in 41 of the state’s 58 counties. At least 21 people have died.

It takes targeted study to know the role of climate change in specific weather, but warmer air means storms like the ones that deluged California in recent weeks can carry more water.

Yet California’s drought has dulled people’s sense of the risk of flooding. People usually buy insurance after disasters when the risk is visceral, said Amy Bach, the executive director of insurance consumers group United Policyholders.

“People think the only people that need flood insurance are people who live right on the beach or on the banks of a river that has a history of flooding,” Bach said. In reality, far more people are threatened by rushing or rising water.

When you buy a home, a key document will be official Federal Emergency Management Agency maps that tell you if it’s in a high risk flood zone. If it is and you have a federally-backed mortgage, you are required to buy flood insurance that costs on average $950 a year. Many banks require it too.

Yet FEMA maps are limited and only take into account certain kinds of flooding — they don’t really predict flood risk. Flooding caused by heavy rains that back up storm drains is not counted, for example. The limitations mean flood risk is underestimated nationally. The maps particularly lowball the chance of disaster in California, according to Matthew Eby, executive director of First Street Foundation, a risk analysis organization.

The FEMA maps don’t show Stark’s mobile home in a high risk area. And three years before his neighbor Juan Reyes bought his house, a series of storms dumped record amounts of rain on the state and flooded their neighborhood.

Reyes knew this, but he still did not buy flood insurance. It was too expensive, he said, and wasn’t required. Plus, he thought local officials had improved the storm drainage system so that a similar flood wouldn’t happen again. But it did and Reyes also had to be rescued by boat. He’s staying at the same evacuation center, hoping his home isn’t too badly damaged.

The storms damaged several thousand homes so badly they’ll need to be repaired before people can live in them again. But Nicholas Pinter, a professor at the University of California, Davis who researches watersheds, said California needs to be prepared for even bigger events and that requires far more investment in flood defenses and more awareness of its danger.

“It is worrisome that there was as much damage as there was for what was extreme but not catastrophic flooding,” he said.

Also trying to figure out how to recover is David Enero in Merced, a community of roughly 90,000 in California’s Central Valley that flooded badly. Water rose ankle-deep in his house. The laminate floor in his living room floated.

“It was kind of like you were walking on a wave or a trampoline” he said. The house smells like a mix of mildew, rotted hay and septic system overflow.

Enero lives in an area that is designated high risk where people have to buy flood insurance. He says paying for the damage on his own would be unimaginable. In retrospect, he wishes he had insured his belongings as well.

Although the maps force Enero and others in certain areas to buy coverage, FEMA no longer uses its famous maps to set the prices.

The agency updated its pricing in 2021 to more accurately reflect risk and dubbed it Risk Rating 2.0. FEMA says these revised prices — and not flood maps — are what communicate flood risk to consumers. The old system placed more emphasis on simple metrics — a home’s elevation and whether it was in a mapped flood zone. Risk Rating 2.0 considers distance to water, damage caused by heavy rain and many other factors. It raises rates for about three-quarters of policyholders and offers price decreases for the first time.

FEMA has long said the new ratings would attract new policyholders with prices that reveal a property’s true risk, and are more precise. Yet since they went into effect in California, the number of policies has dropped by roughly 5%, continuing a years-long decline nationwide.

Some aren’t aware of their risk.

Jay Laub, one of Reyes’ neighbors, also rescued from the floodwaters, said when he bought his house the insurance companies were mostly trying to sell him earthquake coverage. He said he assumed his house was covered for flood. He learned this week it wasn’t.

Laub said he’s worried his mobile home might have sunk in the soggy ground, which could require him to relevel it. He said he’s not sure how he would pay for it.

“What do you do? You’re on social security, like I am,” he said. “But you know what? You take it one step at a time. You’ve just got to stay strong.”

Trevor Burgess, CEO of the private insurer Neptune, said there’s been a run on new policies with the storms. During the first 10 days of 2022, the company sold 53 in California. This year, Neptune sold 313 — a roughly 500% increase.

“Storms, even as they are this terrible tragedy – human tragedy and tragedy for property – it does have the effect of reminding people that they are vulnerable and need to protect themselves,” said Burgess.