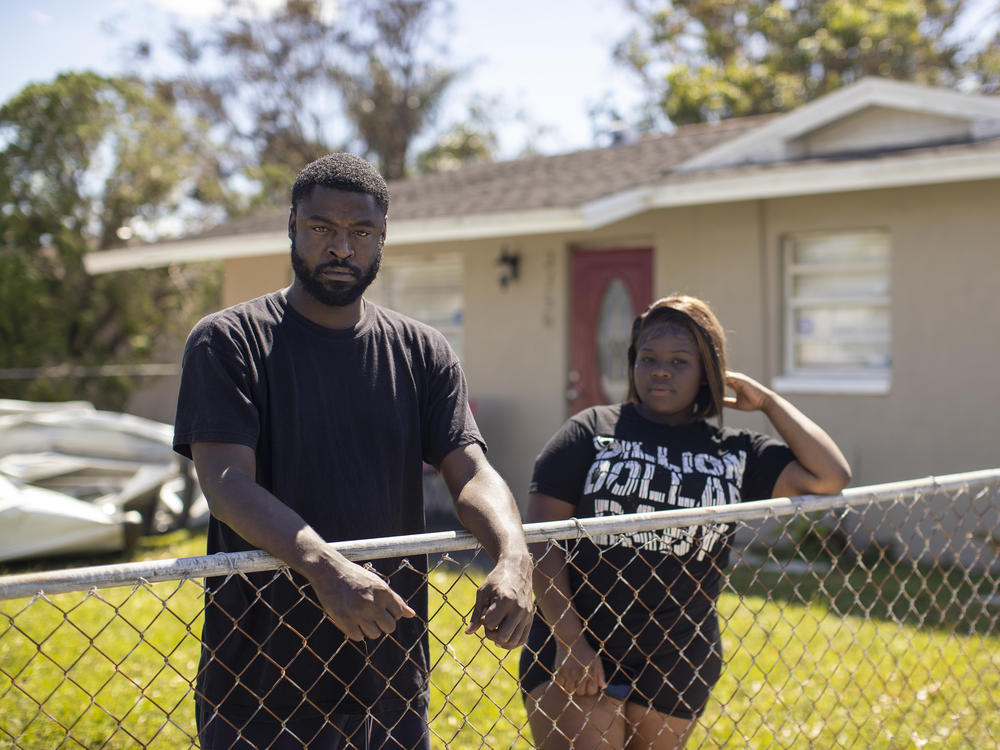 FORT MYERS, Fla. — Unlike the affluent seaside communities of Sanibel Island and Fort Myers Beach, where the media has descended to chronicle every detail of the aftermath of Hurricane Ian, the people who live in the squat homes in Dunbar have faced the crisis mostly on their own.

And for many in the historically African American neighborhood, there’s a sense of anger and frustration. “They’re saying the islands got destroyed,” observes 24-year-old Lexxus Cherry. “Well, we’re destroyed, too. We’re really messed up here.”

There’s no electricity. Water comes out of the faucet, but it’s little more than a thin brownish stream, unsafe to drink. A faint smell of sewage wafts up from the street.

When people here call the power and water authorities, they get only vague assurances. No promises, and no timeframes.

Cherry’s uncle, Ta’Wan Grant, detects a pattern in their plight.

“I understand that the city is trying its best to restore everybody’s power,” he says. “But this is a common thing that I’m seeing in cities around America. Whenever a disaster happens, for some reason the city is slow to respond to people in ethnic communities, in low-income communities.”

“We are the ones who need the most help,” Grant says.

A large piece of twisted aluminum siding, apparently blown in from across the street, lies in a crumpled heap on Grant’s front yard. His air-conditioning unit was ripped away, leaving a gaping hole in the side of his house.

Cherry’s mother, Chanel, who lives a few blocks away in low-income housing, underwent a kidney transplant in May. She says she’s had “no water, no ice, no nothing” since Tuesday. “I haven’t seen one police [officer] come to check on the community where we live,” she adds.

In the storm-affected areas in and around the city on Sunday, an estimated 580,000 people were still without electricity, and boil water notices had been issued for 120 areas in 22 counties.

“You can’t hide from God”

Earline McCoy has lived next door since 1969. She’s seen a lot of hurricanes come through here in the last five decades. But this one tops them all, she admits.

McCoy and her friend Jesse Howard stayed at home as Ian approached. “You can’t hide from God,” she says.

The roof on the back side of her house heaved up and down in the fierce winds, causing the drywall ceiling to give way and collapse. Lucky for her, she’s insured.

McCoy, who is 85, says she’s been getting bottled water from a nearby relief center. She’s optimistic that “if we get lights on in the next day or two, we’ll save our food.”

Outside nearby Dunbar High School, which is being used as a temporary shelter, Sheddrick Jacobs and his wife, Sheneka, wait for a bus to take them to the centralized shelter, with power and water, at the Hertz Arena in Estero.

“I’m getting what I need, and I think other people are getting what they need too,” he says. “From what I see on Facebook and Instagram and then us coming to here, I think it’s been great.”

One woman’s tale of two storms

About a mile west, in the Dean Park Historic District, Lindsay Comstock’s rental house nearly backs up to the Caloosahatchee River, which Ian caused to overflow its banks, sending a torrent of water through the one-story home.

As the storm closed in, she evacuated to nearby Naples, “but they got hit just as bad, and I lost my truck there.”

As she’s pulling soaked rugs and clothing from the house, her boyfriend telephones. “Everything is gone,” she tells him. “Every single thing we own is gone.”

Comstock was living on the Jersey Shore during Hurricane Sandy in 2012. She lost almost everything in that storm too, she says.

Since Ian, she’s already filed with the Federal Emergency Management Agency, or FEMA. “They really did help me out” after Sandy, she says. “I’m hoping the same with this. It takes a little while.”

Looking around the destruction that was her life, she seems resigned.