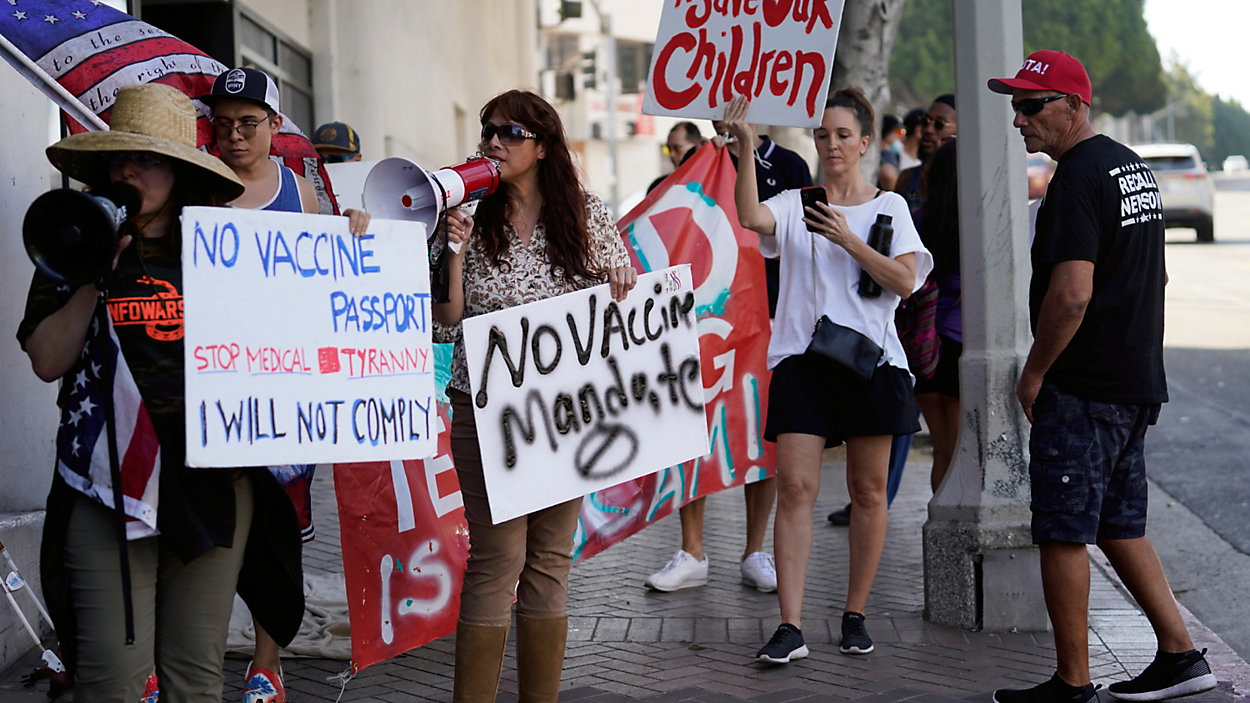 Statewide — Parents across California staged protests on Monday to show their anger at Gov. Gavin Newsom’s directive that all school children need to be vaccinated against the coronavirus. California is the first state in the union to propose this rule.

The protests were part of the National School Walk Out.  Angry parents demonstrated at schools, and some pulled their children out of class.

There were signs of protests across Southern California. Parents staged protests in Redlands, Riverside and Rancho Cucamonga. The demonstrations also featured protesters holding placards with signs such as “Freedom of Choice,” “Unmasked and Unafraid,” and “Freedom Not Force.” According to news reports, about 75 protesters demonstrated in front of the Redlands Unified School District’s headquarters.

However, Riverside County’s top educator frowned upon parents who pulled their children out of school to protest the vaccine mandate.

“In Riverside County, we believe that daily attendance at school is best for all students,” said Riverside County Superintendent of Schools, Dr. Edwin Gomez, in a press statement. “Educators work hard every day to serve students and mitigate learning loss created by the pandemic. Schools will continue to follow the guidelines provided by the state to maintain safe and healthy campuses for students and staff.”

Last month, Newsom announced that the coronavirus vaccine would be added to the list of vaccines required to attend school. Newsom’s strict anti-coronavirus rules, such as lockdowns and mask and vaccine mandates, have proved to be politically unpopular but effective. Newsom’s lockdown rules generated so much anger it led to a recall effort, which he survived. However, Newsom’s rules seem to be working as California has the lowest infection rate in the country.

According to a statement from State Superintendent Tony Thurmond’s office, the new vaccine mandate won’t go into effect until 2022.

“We continue to monitor the situation as it unfolds. State Superintendent Thurmond and the California Department of Education support the vaccine mandate because it will keep our students and educators safe and our schools open,” according to the statement. “As the mandate goes into effect in July 2022, between now and then, the State Superintendent of Public Instruction (SSPI) and California Department of Education (CDE) will work closely with school district leaders to help them understand the mandate and work collaboratively with state health and education officials on the rollout.”

“I agree with what Gov. Newsom did in California. People need to realize that having a vaccine requirement for schools is not a new, novel thing that is very peculiar or specific to COVID-19. We’ve been doing this for decades,” said Fauci.

“California State PTA supports the use of vaccines to protect the health and safety of children and families across California. The state of California has required student vaccinations in public schools for years and PTA has long-held positions on vaccine requirements to protect our most vulnerable children,” said California State Parent Teacher Association President Carol Green.

The coronavirus pandemic has killed more than 700,000 Americans to date. However, during the Trump administration, vaccination became a political issue. Taking the vaccine was seen as a sign of “being liberal.” Trump also downplayed the disease and eventually was hospitalized with Covid. He also took the vaccine in secret. But he has told his supporters that it is their right to refuse the vaccination.

Medical scientists say that vaccination is the best way to prevent against dying or being hospitalized by Covid. According to the latest figures from the Center for Disease Control, unvaccinated people are 11 times more likely to die from the illness.