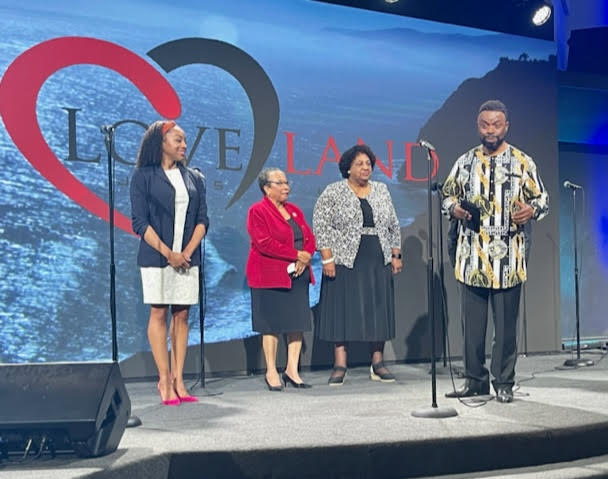 San Bernardino, CA — Last weekend, two of the most powerful Black women in California — both elected officers — visited seven churches in the Inland Empire, ahead of the June 7 primary elections.

California Secretary of State Shirley Weber and Board of Equalization Chair Malia Cohen began their micro-tour of Black churches at Loveland Church located in Fontana where the Rev. Charles Singleton is pastor.

“I’d like to introduce you to two outstanding servants of God in our state government,” retired California Assemblymember Cheryl Brown told the congregation at the oldest Black church in San Bernardino before Weber and Brown spoke.

Brown, who served in the Assembly representing the 47th District in San Bernardino County, was a member of the State Legislature from 2012 to 2016.

“First, the highest ranking African American in the state and the third in line for the governor succession, Secretary of State Dr. Shirley Weber,” Brown asked the church to welcome Weber.

“Following her is Malia Cohen,” Brown continued. “Malia is the Chair of the Board of Equalization, and she’s running for State Controller. Both have the highest integrity.”

“I’m honored to be with you,” Weber told the congregation. “I’m the first African American to serve in this position in the 170-year history of California.”

Weber reminded the parishioners that it is “election time” and they are presented a unique opportunity to make their voices heard. She contrasted the voting rights Californians enjoy with restrictive policies in some conservative states that she says are being implemented to restrict access to the ballot box and limit public information about the electoral process.

Weber, who was an Assemblymember representing the 79th District in San Diego before Gov. Gavin Newsom appointed her Secretary of State in 2021, told the churchgoers that standing up for freedom and justice has been central to her professional career.

“I’ve spent my life as a legislator advocating on your behalf,” she said. “Making sure we had laws concerning police use of force, reparations – those opportunities that are there – those are my bills. But also making sure that everyone has the right to vote, has the information about voting, and we’ve lifted so many of the barriers to voting. Right now, in California, if you’re not sitting in state or federal prison for a felony, you can vote.”

“To the church, I know you know how important voting is. I know you know a lot of elected officials that come through here’” Cohen told congregants. “I don’t want you to be offended. It is our way of saying thank you and acknowledging the power that lies in this congregation.”

Weber and Cohen are two out of three African Americans among California’s eight constitutional officers. The other is State Superintendent for Public Instruction Tony Thurmond. All of them are on the ballot for the upcoming June 7 primary election.

“I am here to ask humbly for your support,” said Cohen. “I’ve served eight years on the San Francisco Board of Supervisors. I’ve served three years on the Board of Equalization, and I would like to serve another four years as your State Controller. Please remember me as you cast your ballots.”