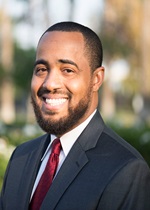 Joseph Williams, 44, of Rialto, has been appointed to the California Community Colleges Board of Governors. Williams has been public affairs manager at Southern California Edison since 2019. Williams is founder of Youth Action Project and was chief executive officer from 2006 to 2018. Williams served in several positions for the County of San Bernardino, including as an offender employment services specialist from 2003 to 2006 and a contracts analyst from 2001 to 2003. Williams is president of the Youth Action Project Board of Directors, executive board member of the California Workforce Development Board and a member of the San Bernardino Community College District Board of Trustees, California Committee on Employment of People with Disabilities, Alpha Phi Alpha Fraternity and Rotary International. He earned a Master of Arts degree in social impact from Claremont Lincoln University. This position requires Senate confirmation and the compensation is $100 per diem. Williams is a Democrat.

Iulia Tarasova, 22, of Roseville, has been appointed to the California Community Colleges Board of Governors. Tarasova has been a student trustee caucus secretary at the Student Senate for California Community Colleges since 2019. Tarasova was a student trustee of the Sierra College District Board of Trustees and president of the Student Senate at Sierra College from 2019 to 2020. She held several positions at the Student Senate at Sierra College, including senator in 2018 and director of public relations from 2018 to 2019. She was a human resources intern at the City of Roseville from 2018 to 2020. Tarasova was an intern in the Finance Department at Quest Media & Supplies Inc. from 2016 to 2019. She was a student tutor at Roseville Joint Union High from 2016 to 2017. Tarasova was a Summer Youth Intern at Kaiser Permanente in 2016. This position does not require Senate confirmation and the compensation is $100 per diem. Tarasova is not registered to vote.