GOP Rushes Through Barrett Confirmation in Less Than Two Months 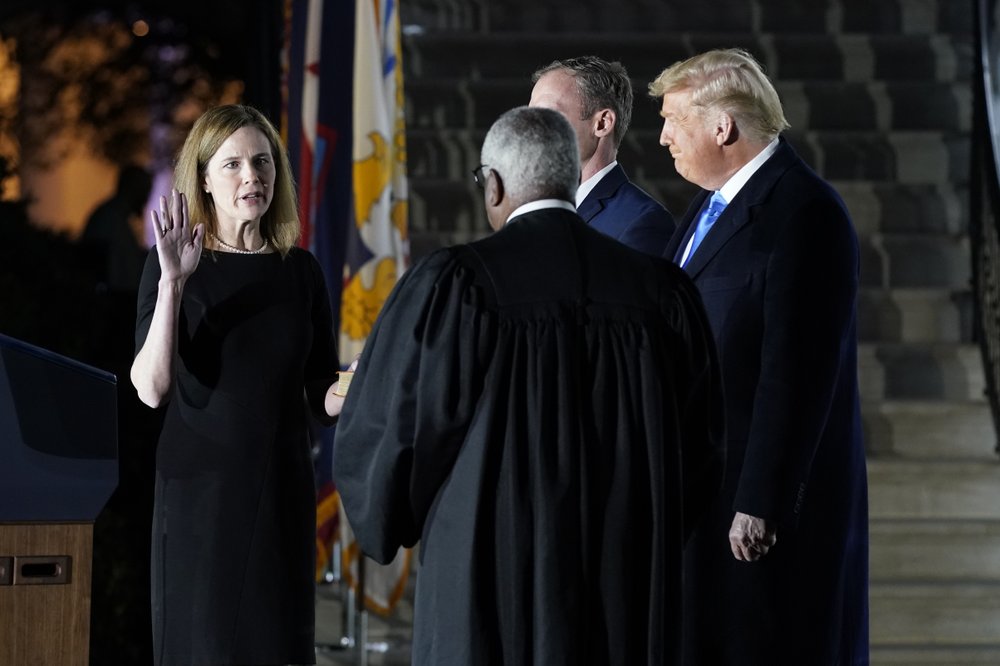 In case you did not notice, Amy Coney Barrett, a woman with only four years’ experience on the bench, just became the newest Supreme Court judge. Barrett, who was confirmed on Monday, and sworn in at a White House ceremony, was rushed through in less than two months.

Ironically four years ago, Senate Leader Mitch McConnell refused to even consider the confirmation of Judge Merrick Garland who was nominated by President Barack Obama. Back then, McConnell claimed that since it was 9 months until the election, “the next president” should decide who would sit on the Supreme Court. The move was widely seen as unprecedented.

“You really cannot find any single comparable case,” said University of Illinois law professor Jason Mazzone in a 2016 New York Times article. “We really did not find any precedent for the idea, notwithstanding the Senate’s very broad powers in this area, that a sitting president could be denied outright the authority to offer up a nominee who would receive evaluation through normal Senate processes.”

But in 2020, McConnell had no qualms about rushing through Barrett’s confirmation less than two months before the election.

Democrats were enraged by the blatant hypocrisy, but there was little they could do since the GOP has a majority in the Senate. Barrett was confirmed in a 51-48 vote. Sen. Susan Collins (R-Maine) was the only Republican who voted no.

“It is hysterical to watch our Republican colleagues try to pretend that the confirmation of Amy Coney Barrett is about anything other than their decade-long attempt to repeal the Affordable Care Act. It’s as if they think all of us have been asleep for 10 years — that we didn’t watch while they tried to repeal all or part of the Affordable Care Act 70 different times,” said Murphy during a healthcare forum.

Barrett has far-right views and was raised in a fringe religious sect called the People of Praise. The group emphasizes strict gender roles and believes men should be head of the household. Each member of the group is assigned a male or a female mentor. Women in the group used to be referred to as “handmaids.” The group has also faced accusations of covering up child abuse and abusing female members.

Barrett joins a 6-3 conservative majority on the Supreme Court. She replaces the late Ruth Bader Ginsburg who was part of the liberal wing. This is how her judicial views are likely to affect Americans:

Abortion rights. Barrett is a staunch opponent of abortion rights and is likely to overturn Roe V. Wade, a long-standing goal for conservatives. According to MSNBC host Rachel Maddow, a vote on this issue could come this Friday.

The American Care Act (ACA) also known as Obamacare. Barrett is a so-called “originalist” who is likely to rule anything that was not covered in the constitution illegal. That means she would likely rule to overturn Obama’s signature healthcare law and strip coverage for millions of Americans in the middle of a pandemic.

Elections. According to a Medium article, Barrett served on a legal team that worked on the case that helped the Supreme Court hand the 2000 election to George W. Bush. The team argued that the ballot recount should cease, effectively awarding Florida to Bush. The Supreme Court ruled in favor of this decision, and Bush became president. Barrett is likely to rule this way in any future election challenges.

And Trump seems to be expecting this. “Barrett’s confirmation on Monday will almost certainly tip the balance to make that argument the law of the land on the eve of an election. The result would be an immediate invalidation of thousands of disproportionately Democratic ballots in Pennsylvania and North Carolina—two swing states that could decide the outcome of the election. Put simply, Barrett’s first actions on the court could hand Donald Trump an unearned second term, and dramatically curtail states’ ability to protect the right to vote,” said Slate writer Mark Joseph Stern.

But Barrett’s confirmation might be a sign that the GOP expects a bloodbath in November. The GOP plans to have a Supreme Court that will overrule any future progressive legislation. An Atlantic article described her confirmation as the GOP’s “last gasp” to hang on to power.