Drought-Hit California Cities To Get Little Water From State 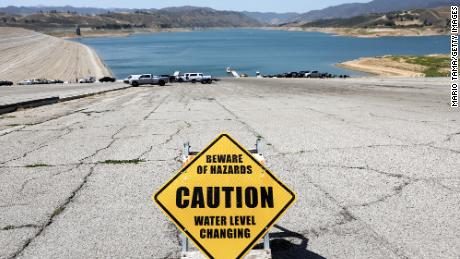 SACRAMENTO, Calif. (AP) — California water agencies that serve 27 million people will get just 5% of what they requested from the state to start 2023, water officials announced Thursday.

The news of limited water comes as California concludes its driest three-year stretch on record and as water managers brace for a fourth year with below-average precipitation. But if the winter is wetter than expected, the state could boost how much supply it plans to give out — as it did last year when allocations started at 0% and ended the winter at 5%.

Absent an end to the drought, water-saving measures are poised to continue, including calls for people to rip up decorative grass, limit outdoor watering, take shorter showers and run dishwashers only when full. Much of California is in extreme or exceptional drought, according to the U.S. Drought Monitor.

A storm currently bringing snow and rain to the northern end of the state has been welcome news, but people shouldn’t get too optimistic, warned Michael Anderson, the state climatologist. Last year two major storms in October and December were followed by months of bone-dry weather.

“Don’t get too carried away by any one storm,” Anderson told reporters.

Much of California’s water supply comes from snow that falls in the mountains during the winter and enters the watershed as it melts through spring. Some of it is stored in reservoirs for later use, while some is sent south through massive pumping systems.

Southern California’s supply is further threatened by the ongoing crisis afflicting the Colorado River, another major source for the heavily populated region. The district is working on a massive water recycling plant to eventually supplement supply.

“Metropolitan is doing everything we can to alleviate the immediate crisis and make investments to provide more tools than emergency conservation alone,” Adel Hagekhalil, the district’s general manager, said in a statement. “But now we need the public’s help. We can get through this by working together.”

Some districts with limited water supplies may get additional water if the 5% isn’t enough to cover critical health and safety needs, said Molly White, water operations manager for the State Water Project.

Given the uncertainty about how long the drought will last, the state wants to keep water in Lake Oroville, its largest reservoir. Right now, it’s about half as full as it usually is at this time of year. So officials plan to tap excess water from winter storms to provide the 5% supply and take some water out of the San Luis Reservoir in Merced County, White said.

“We’re all just sort of holding our breath to see what mother nature does,” said Michael McNutt, spokesman for Las Virgenes Municipal Water District, which serves some wealthy suburbs of Los Angeles and relies almost exclusively on state supplies.

The district may completely ban outdoor watering if dry conditions persist, he said.

The federal government also controls some water supply in California, much of which goes to farmers in the vast Central Valley who grow fruits, nuts and vegetables. The U.S. Bureau of Reclamation doesn’t issue its first water allocations until February but on Monday warned farmers and cities to prepare for limited supplies.

“If drought conditions extend into 2023, Reclamation will find it increasingly difficult, if not impossible, to meet all the competing needs of the Central Valley Project without beginning the implementation of additional and more severe water conservation actions,” the bureau said in a news release.