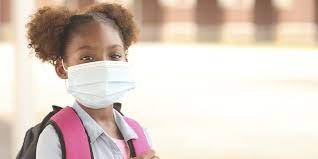 Nationwide — School children are headed back to the classroom right in the middle of the fourth wave of the coronavirus pandemic. Educators, parents and mental health experts have deemed that education is more beneficial when provided in person. (Parents say they have witnessed behavioral problems in children who didn’t thrive during distance learning such as sleeplessness and depression,) But the idea of sending thousands of children back to school in the middle of the Covid-19 pandemic sounds like a disaster waiting to happen.

And we are already seeing some examples of the dangers of sending children back to crowded classrooms.

In Mississippi, Mkayla Robinson, a 13-year-old, died after being exposed to the virus. She had just started school but fell ill and stayed home. She died while being airlifted to a hospital.

There is also another problem. Although children are supposed to be at low risk of catching the disease, they still can take the infection back to family members. And we’ve already seen some instances of this.

Health experts say they expect to see an increase in infections as more children return to school.

And this has been compounded by some red-state governors who have tried to politicize the mask issue. For example, governors in Texas, Mississippi and Florida have all refused to pass statewide mandates. However, some local school boards are rejecting the governors’ directives and implementing mask guidelines.

In Florida, Gov. Ron DeSantis has threatened to withhold the salaries of school officials who implement such measures.

But some educators are standing firm and are willing to risk their jobs over student safety.

However, the mask battle and the continued refusal to take Covid-19 seriously are straining the healthcare system.

Even worse, there have been cases of parents and children who have refused to quarantine once they tested positive.

Earlier this month, about 80 students in Reno, Nev. were exposed to the disease after a parent sent a child who had tested positive for Covid-19 to school.

“Principal Brandon Bringhurst sent a letter home to the parents of the possibly infected children that same day. The statement explained that the children would be able to return to in-person learning on August 17 if they lacked symptoms and tested negative for the virus on or after August 14,” said Yahoo. “’Out of an abundance of caution and due to possible exposure to COVID-19, your student must be in quarantine at home, per Washoe County Health District guidelines,’ Bringhurst’s message stated, according to the Reno Gazette Journal.”

However, health workers are currently bearing the brunt of this new wave of coronavirus patients. And they’re getting frustrated with having to take care of people who refused to protect themselves from an easily preventable disease.

On Monday, 75 Florida doctors staged a protest outside a medical office to protest working conditions.

“We are exhausted. Our patience and resources are running low and we need your help,” said Rupesh Dharia, a doctor from Palm Beach Internal Medicine, in an interview with NBC News.

And in some states, doctors threaten to stop treating people who refused to take the coronavirus vaccine.

“Dr. Jason Valentine, a family medicine physician at the Diagnostic and Medical Clinic Infirmary Health in Mobile, Alabama, informed his patients this month that, effective Oct. 1, he would no longer treat those who hadn’t been vaccinated against Covid-19,” said NBC News. “Around the same time, a leaked memo indicated that the North Texas Mass Critical Care Guideline Task Force was considering whether to take Covid vaccination status into account in deciding who gets ICU beds when more of them are needed than are available.”