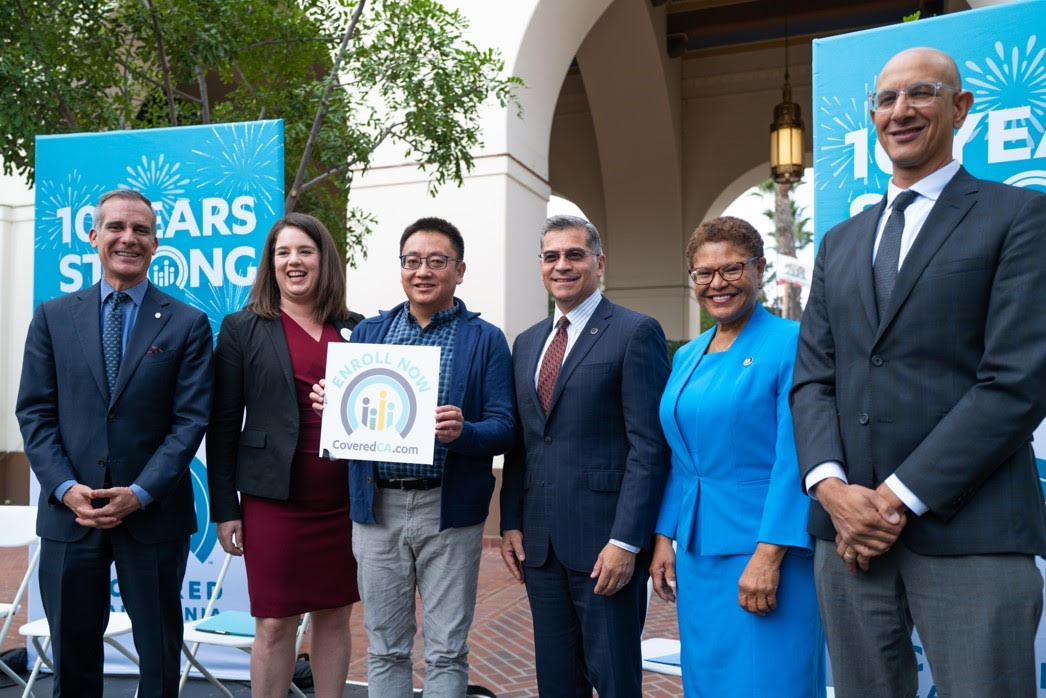 Covered California is the government agency that offers subsidized Obamacare plans for Californians. Those who qualify receive financial assistance on a sliding scale for their health coverage in compliance with the Affordable Care Act (ACA).

Depending on income, some consumers may qualify for another state-provided health insurance option, Medi-Cal, at a lower or no cost.

“We saw from COVID how many gaps there are in our health public health care system. First and foremost, we’ve got to get people covered. They know they have that peace of mind if they can walk into any doctor’s door, into any hospital. It gives them the confidence to do it the right way,” said Becerra. “That’s why we’re going to continue to expand. When you can offer an American health insurance plan for 10 dollars or less a month; you can’t go see a movie today, not in LA, for 10 dollars… 10 dollars or less a month for peace of mind. That’s what we’re selling.”

Since Covered California’s first open enrollment campaign in 2013, federal data shows that California’s uninsured rate fell from 17.2% to a record low of 7.0%, the greatest percentage decrease for any state in that period, and below the national average of 8.6%.

Publicly funded Certified Enrollment Counselors, or “navigators,” provide consumers with free, unbiased advice as they look for health insurance options available on the marketplace. They help complete eligibility and enrollment forms and they assist with outreach, education, and renewal support services.

Still, according to estimates from Covered California, 1 million people are uninsured and eligible to get insured with low-cost or no-cost plans.

“Regardless of your income, if you need health insurance or if you’re covered directly through a health insurance company, come to Covered California to see if you can get financial help to make your insurance more affordable,” said Jessica Altman, Executive Director of Covered California. “The increased and expanded help that was extended by the Inflation Reduction Act is changing lives by helping more Californians get covered and stay covered.”

Getting and maintaining coverage is a critical first step that cannot be overstated, some health advocates say, but the healthcare system still has opportunities to better serve Black Californians. A recent California Healthcare Foundation (CHCF) survey found that 90% of Black Californians have health insurance coverage, but nearly one in three reported being treated unfairly by a healthcare provider because of their race or ethnicity.

“Just because Black folks are covered, doesn’t mean they are getting quality care,” said Congresswoman Bass, a former physician’s assistant. “That has nothing to do with Covered California per se. It has to do with the inequities in the healthcare system. And having worked in the healthcare for a long time, I know that those inequities exist, and its across class. So, when Beyoncé and Serena Williams almost lose their life after a normal childbirth, it’s indicative of problems that are related specifically to race.”

The best remedy at this time is engagement. According to the CHCF survey, two thirds of Black Californians report researching a health condition or concern before meeting with a healthcare provider to mitigate potential negative experiences, an observation Congresswoman Bass agrees with.

“The main thing that people can do is make sure that they are well educated. In other words, when you go to a doctor, don’t just leave it 100% up to the doctor, study up on what they are saying,” Bass said. “We need to have advocates inside of healthcare who are trained – sometimes there are medical social workers who do that.”

Californians can explore their options at CoveredCA.com or by calling Covered California at (800)300-1506. They can easily find out if they qualify for financial help and see what coverage options are available.

The open enrollment period will continue until Jan. 31, 2023.