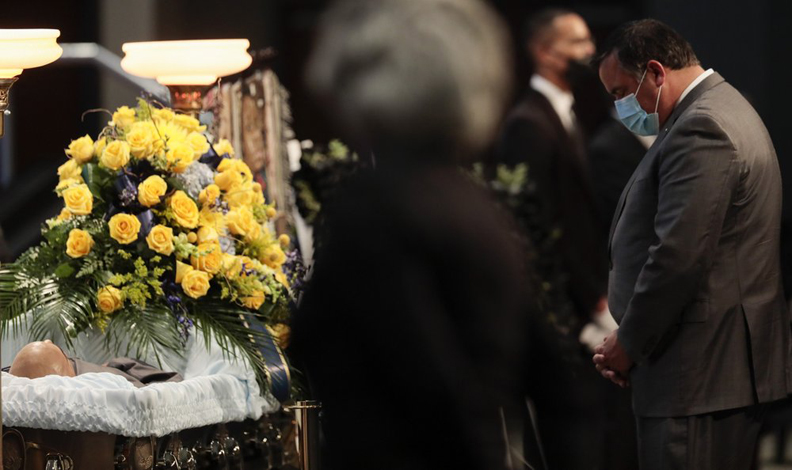 Columbus, OH (AP) — Officials in Ohio’s largest city said that they plan to invest $4.5 million in body-worn cameras for police and introduce a law that would ensure officers use the cameras correctly after the fatal shooting of Andre Hill last month by a white officer.

“While many of us woke up this morning with a renewed sense of purpose and optimism, a new year and a new president does not erase the past or the pain felt by those who loved Casey Goodson Jr. or Andre Hill,” Columbus Mayor Andrew Ginther said in a briefing Thursday.

Ginther and other city officials announced the plans to address policing issues reawakened by the fatal shooting of Goodson and Hill, both Black men, at the hand of law enforcement in Columbus in a matter of weeks.

Goodson, 23, was killed Dec. 3 by a Franklin County sheriff’s deputy, Jason Meade, as he walked into his grandmother’s house in Columbus. The case remains under state and federal criminal investigation.

Three weeks later, Hill was fatally shot Dec. 23 by city police Officer Adam Coy, who was responding to a nonemergency call about someone turning their car on and off in a northwest Columbus neighborhood. Coy has since been fired.

When Coy arrived, he did not turn his camera on until after he had shot Hill several times, officials said. It was only a lookback feature of the camera that allowed the public to view a 60-second glimpse of the shooting — but without audio.

Additional bodycam footage released in ensuing days showed that no responding officers rendered aid to Hill as he lay on a garage floor, moaning.

As a result, Ginther said, the city will spend millions to update the body-worn cameras of Columbus city police first bought in 2016 to ensure the city has the footage when it needs it the most. The new cameras, set to be released this year, will record without needing officers to activate them.

The cameras will also produce better resolution and clarity through wireless technology that will sync with the new dashboard cameras, which are being installed right now, Ginther said.

The improved bodycams will automatically activate when an officer exits a cruiser on a priority call, as well as be available if a use-of-force case occurs during a nonemergency call, like the one that led to Hill’s death.

The bodycam changes will not be instituted in the Franklin County Sheriff’s Department, which does not currently require bodycams for its officers. But the department will be covered by the City Council’s plans for a law that would ensure officers use body cameras accurately and help victims after they use force on them.

Officers who violate the law could be subject to disciplinary action and even criminal charges, said Shannon Hardin, City Council president.

“This law will not solve all police violence, but it’s one more step in the right direction to ensure we know what is happening on the scene based on bodycam footage and ensure that if residents are hurt, police officers are there to render aid and for those who don’t comply, that there can be greater accountability,” Hardin said.

The legislation, named Andre’s Law, is to be introduced during a council meeting Monday.

Farnoush Amiri is a corps member for the Associated Press/Report for America Statehouse News Initiative. Report for America is a nonprofit national service program that places journalists in local newsrooms to report on undercovered issues.