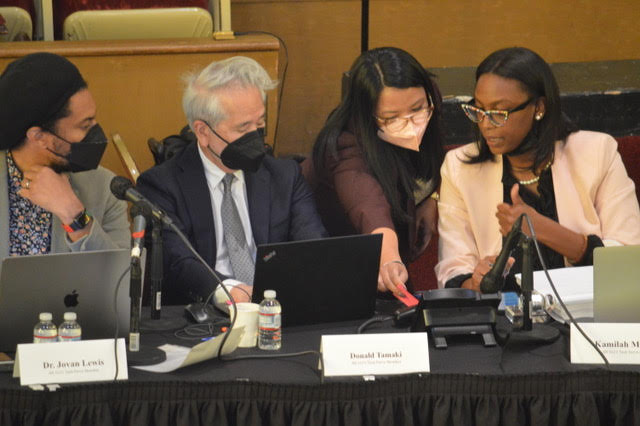 Sen. Steven Bradford (D-Gardena) summed up what he viewed as the reason for low turnout and public engagement at the ninth meeting of the California Task Force to Study and Develop Reparations Proposals for African Americans.

“Rudimentary, basic communications of alerting the community about meetings must be mandatory. That’s the part where we failed. We have a great story to tell but we are not telling it,” Bradford said April 14 during the second session of the two-day meeting.

“Frankly, I thought we’d have standing-room only these two days. I thought everybody in California wanted to be here. I think we missed the mark in promoting the first in-person meeting. That’s where the frustration is and where it is with me.”

Held at the Third Baptist Church in San Francisco, located in the city’s historic Fillmore District, the first in-person meeting since the task force convened in June 2021 was hosted by the Rev. Amos Brown, who is vice chair of the task force.

Brown, who is also president of San Francisco’s NAACP branch, said the panel’s communication’s strategy, or lack thereof, “has been compromised.”

The few dozen attending the meeting had no difficulty finding a seat in the large sanctuary of the historic church, which is a city landmark.

Leading up to the April meeting, there were simmering disagreements about the public relations strategy of the task force. The tensions came to a head when task force chair Kamilah Moore expressed her “concerns” with the firms contracted to handle communications at the March 29 meeting.

For nearly two hours at that meeting, the panel discussed challenges it has experienced with the contracted communications teams.

based PR firm; and A/B Partners, a national social impact firm — were contracted to run the task force communication shop through the California Department of Justice.

Due to the high levels of tension that surfaced at the meeting in March, task force member Dr. Cheryl Grills said A/B Partners “resigned,” fearing harm to its reputation and the “vote of no confidence” in the company’s work as reflected in the statements of some task force members.

Aside from the task force meetings, the anchor organizations are responsible for hosting public-engagement sessions in April, May, and June.

structural challenges hindering the organization because it functions under the umbrella state government. Grills said those problems delayed the center from performing its duties although it was “operating at warp speed” to make good on deliverables.

The bottom line, Grills shared, is that the Bunche Center has to abide by UCLA’s snail-paced process of handling contracts. The staff at the center missed two important “deliverables” in January and February waiting for greenlights from higher ups.

“The approval process is not under the purveyance of the Bunche Center,” Grills said. “We must understand that UCLA is a high-level bureaucracy of the state of California, which means that nothing happens quickly.”

Task force member Jovan Scott Lewis, chair of the Department of Geography at UC Berkeley, supported Grills’ explanation by providing his experiences with the UC system of schools.

UCLA’s Institutional Review Boards (IRBs) review and approve proposals and contracts before a research project is conducted. And each anchor organization is required to submit applications to be categorized as “vendors” by the university.

“I think that there is something to be said for the complications of getting something out of this process,” Lewis said. “When you add in the actual intellectual limits of the (anchor organizations), the requirements are typical for IRB. It’s quite reasonable to think about the delays. That’s the UC system’s (process).”

Michael Stoll, professor of public policy and urban planning, the new director of the Black Policy Project, which is housed at the Bunche Center, addressed some of the panel’s concerns by phone.

Grill said it has not been a smooth experience but offered assurances that the Bunche Center will respond to the anchor organizations’ needs and provide guidance for listening sessions.

“I think we’ve been fairly responsive,” Stoll said of addressing the anchor organizations’ needs. “Our goal was to plan and execute the listening sessions to their best potential as possible, and I think we are doing it fairly well.”

While operating without financial resources, Grills said the task force, YCG and A/B partners were in the process of finalizing contracts and were ready to proceed with directions from the nine-member panel.

“Everything came to a halt at our March meeting,” Grills said. “Unfortunately, we may have put a negative spin on the reputations of communications firms that have spent years building credibility.”

Since the start of 2022, national media coverage of the task force has increased, including Moore’s appearance on MSNBC’s Tiffany Cross Show to discuss the panel’s decision to use lineage over race as the factor that determines who is eligible for compensation. That decision squeaked through with a 5-4 majority vote.

Lewis was interviewed by NBC Nightly News for a reparations-related clip involving Black Gold Rush pioneers who may have lost their land to the state in the 1940s. Other members of the task force have made their media rounds as well.

Members of the task force say they want the community-engaged listening sessions to happen without a hitch.

Seven anchor organizations will host public listening sessions that will help the task force hear various perspectives of Black Californians as it assesses the state’s involvement in slavery and Jim Crow discrimination.

Chris Lodgson, a founding member of the Coalition for A Just and Equitable California (CJEC), one of the host organizations, told the task force in San Francisco to add more communications firms.

“I gotta keep it business with you but the performance of the communications firms has been subpar,” Lodgson said. “I want to encourage (the task force) to find additional firms to get the word out to the community.”

Before the April meeting ended, Moore who is listed on the ballot as a candidate for the 28th District Senate seat, was officially appointed the task force’s spokesperson. She and Grills will serve on the “solutions-oriented” Advisory Board Committee working directly with the Bunche Center and Young Communications to “triage” media and public affairs activities, Moore said.

“What we’re dealing with can be complex and convoluted,” task force member Monica Montgomery-Steppe said. “And getting that across on a national stage, because we are the example of what we hope for this

nation, does need a larger strategy…a level of experience.”

By statute, the task force will issue a report to the Legislature by June 1, 2022, which will be available to the public.

Bradford said the communication shop can be instrumental in writing press releases and speeches, conducting research, problem-solving and disseminating information.

“This (Task Force to Study and Develop Reparations) will sell itself if we get it to the right people,” he said.