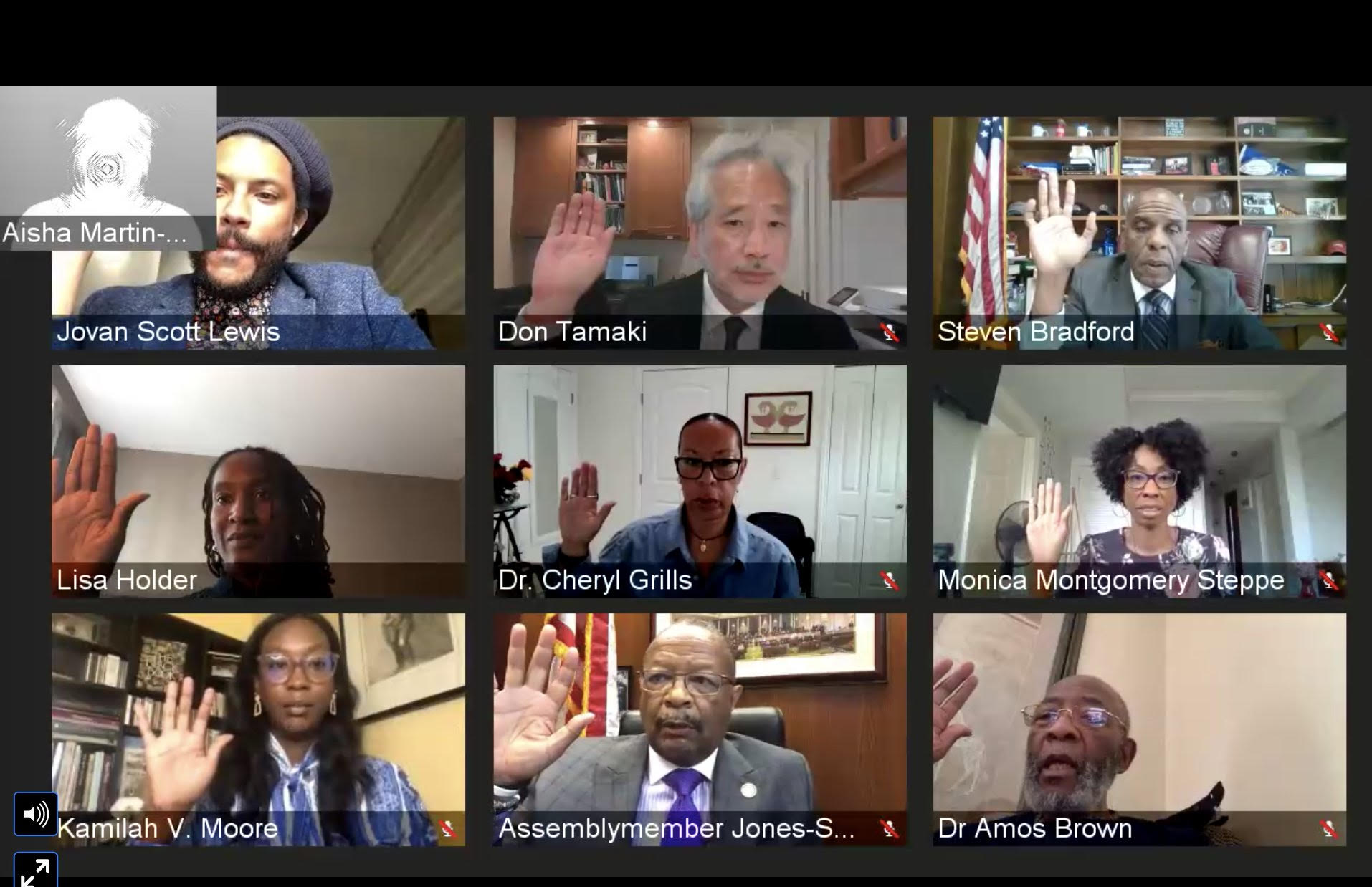 The virtual gathering marked the official launch of the first-in-the-nation initiative organized to investigate how a state engaged in and benefitted from slavery, and how it practiced or condoned racial discrimination, excluding African Americans from economic and other opportunities.

During the meeting that lasted over four hours, the 9-member task force elected Kamilah V. Moore, a Los Angeles-based activist and attorney, as its chair. The group also elected Dr. Amos Brown, pastor of Third Baptist Church in San Francisco and president of the San Francisco NAACP branch, as vice chair.

The newly elected leaders represent an inter-generational team, bridging the millennial and baby boomer generations, which are known for their often-conflicting worldviews.

Moore, who passed the California bar examination in January, intends to use her studies in domestic and international human rights to provide perspective on, “how the recommendations comport with international standards of remedy for wrongful injuries caused by the state, that includes all reparations and special members measures as understood by various international protocols laws and findings,” she said.

In her term as chairperson, Moore says she will provide expertise on, “how the state of California will offer a formal apology on behalf of the people of California for the perpetuation of gross human rights violations and crimes against humanity against Black Americans who descend from chattel slavery in the United States.”

A history buff and student of Dr. Martin Luther King, Jr., civil rights veteran Brown has dedicated more than six decades of his life to fighting for racial justice and equality.

“I’m concerned about our people and making sure that we stay on point in terms of delivering the sons and daughters of Africa what belongs to them,” said Brown.

The task force will be collaborating with the California Department of Justice to conduct research and provide recommendations for compensation based on the requirements of Assembly Bill 3121, the legislation that paved the way to set up the task force.

The reparations task force will work with renowned researchers and scholars to both quantify and qualify the damage slavery had on African Americans in California. The collaborators will conduct extensive research to examine the economic, educational, and social injustices suffered by descendants of enslaved Black people in the United States.

Coauthors of the book, ‘From Here to Equality: Reparations for Black Americans in the 21st Century,’ Kirsten Mullen and William A. Darity, Jr., will provide general guidance for ways the state needs to implement reparations.

History professor Stacy Smith will offer expertise on the impact of slavery specific to California and how racial injustices affected the descendants of enslaved Africans.

African Studies professor Marne Campbell will lead a research team that includes students at Loyola Marymount University to compile a report on various federal and state laws, regulations, policies, and practices that discriminate against African Americans.

“We must be aggressive in our efforts, be honest and direct, and figure out what we need to do in California, and be an example to the rest of the nation,” said California Secretary of State Shirley Weber, who authored the bill when she was an Assemblymember representing the 79th District in the San Diego area.

Weber said that the inaugural meeting is a historic moment that is 400 years overdue for African Americans.

“It’s time for folks to acknowledge the harm that’s been done, the harm that continues to be done,” said Weber.

“We are here today because the racism of slavery birthed an unjust system and a legacy of racial harm and inequality that continues today in every aspect of our lives,” she said.

“We are here today not just to seek an answer to say, ‘Was there harm?’ But your task is to determine the depth of the harm, and the ways in which we are to repair that harm,” Weber said to the task force.

The task force is scheduled to host a follow-up public meeting in July to finalize the scope of their study — and how they will move the reparations conversation forward in California.