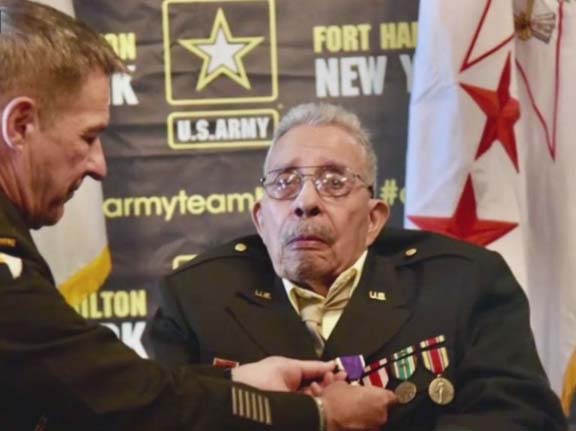 Ozzie Fletcher was wounded while serving in the Army. His daughter had to fight for him to be honored for his service.

Ozzie Fletcher is pinned with the Purple Heart during a Friday ceremony in Brooklyn. Photo: New York Police Department/Twitter

Despite the various sacrifices he made while serving in the U.S. Army during World War II, Osceola “Ozzie” Fletcher was never awarded the Purple Heart after being wounded in battle due to racism and segregation within the military.

In his words, Black soldiers could be “injured, damaged (and) hurt. But they never got wounded. Only the white men who were wounded got Purple Hearts.”

On Friday, military officials righted this wrong during a ceremony in Brooklyn, where the 99-year-old veteran was awarded his long overdue Purple Heart, according to The Washington Post.

“It was an honor and privilege to pin a long overdue Purple Heart on a great Soldier and member of the Greatest Generation, Mr. Ozzie Fletcher,” Gen. James C. McConville, chief of staff of the Army, said in a statement to The Washington Post. “This week, we were able to pay tribute to Ozzie for the sacrifices he made in service to our great Nation during World War II.”

CBS 2 in New York reports that Fletcher was wounded during the Battle of Normandy in 1944.

Jacqueline Streets, Fletcher’s daughter, told the Post that about seven years ago, he asked her to work on getting him replacement medals for his service. It turned out that his records were destroyed in a fire in 1973, the Post reports, but Fletcher’s account of his experiences were recorded during an interview with a film crew. That interview was later sent to the Joint Chiefs of Staff, and Streets later contacted the Joint Chiefs herself to advocate for her father’s award.

From the Post: By April, the Army had its answer: Fletcher was getting his Purple Heart. When Streets met with her father to tell him and her mother, she said Fletcher was “disappointingly cool.”

“How do you feel about that?” she asked.

In addition to receiving the Purple Heart on Friday, the New York Daily News reports that Sen. Chuck Schumer also recorded a video message that said Fletcher “served this country with distinction and selflessness even while African-American soldiers were treated as second-class citizens.”

Fletcher told the Post that he was going to have his Purple Heart framed, and that we will “remember the Fletcher name now.”

Fletcher joins fellow Black World War II veteran Johnnie Jones in receiving a delayed Purple Heart from the Army, as he too as initially denied the honor because of his race.

Here’s to hoping that many other Black veterans who have been overlooked for their honors can also receive the recognition that they deserve as well.