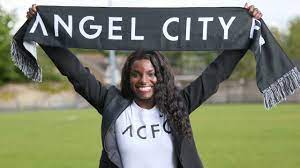 Los Angeles, CA — One of the top executives of Angel City FC, a new team in the National Women’s Soccer League, is a Black woman. Angel City FC is based in Los Angeles. Eniola Aluko is the team’s sporting director. Aluko was born in Nigeria but has British citizenship. She played professionally for several years in England, Italy, and the United States. She represented the England national team more than 100 times.

She has also worked in the world of soccer as a commentator and an executive.

Aluko is a campaigner for racial justice. Her complaints about offensive comments about her ethnicity resulted in the firing of England coach Mark Sampson. She also received a financial settlement for the incident.

Aluko also urged tech companies to take action after several Black English players were racially abused on social media when they missed penalties in the final of the European Championship tournament. Aluko is a trained lawyer.

In an interview with The Guardian, Aluko said she was excited about working for a team that has several women owners.

“Natalie Portman is my boss,” she said.

In The Guardian interview, Aluko explained that her position is a bridge between the management and the coaching staff.

“There is a separation from the coach having to do all that,” said Aluko. “I manage transfers, relationships between clubs both internationally and locally, manage relationships with the league.”