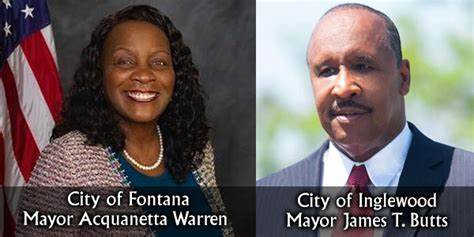 Thanks to the Biden-Harris administration’s latest allocation of $2.2 billion from the Rebuilding American Infrastructure with Sustainability and Equity (RAISE) program, eight grants — totaling more than $119 million — were awarded by the US Department of Transportation (DOT) to local governments, transit agencies and a tribal nation to help improve transportation in California.

The cities of Inglewood and Fontana are beneficiaries of the RAISE program’s goal, “to help urban and rural communities move forward on projects that modernize roads, bridges, transit, rail, ports, and intermodal transportation and make our transportation systems safer, more accessible, more affordable, and more sustainable.”

With different transportation needs and obstacles, the cities are slated to use the award money for different reasons.

In the case of Inglewood, the $15 million will be pushed into the “Inglewood Transit Connector Project” (ITC). The ITC, when fully complete, will consist of an approximately 1.6-mile fully-elevated, automated transit system with three stations to complete a critical gap in the region’s transit system, on segments along Market Street, Manchester Boulevard, and Prairie Avenue. As Inglewood continues to experience increased traffic due to places of interest such as SoFi Stadium, transit

systems such as the ITC have been a key piece of the puzzle for the city’s health and growth.

Supporters of the project say not only will it serve as a cleaner transportation option compared to personal vehicles, the ITC promises to provide jobs to local workers from the area. The ITC project includes a commitment to a Community Workforce Agreement to hire 35% local residents, 10% disadvantaged workers, and 20% apprentice workers.

Inglewood Mayor James Butts applauded RAISE’s transportation award for the ITC and explained the rationale for the project.

“The ITC Project will reduce traffic, improve air quality, and it will enhance the quality of life for residents and visitors across the region,” said Butts.

While Inglewood’s RAISE award money will focus on the ITC transit system, Fontana’s award will feed into the “Building A Better-Connected Inland Empire Project”. As described by the DOT, this program will make major complete streets improvements by constructing additional lane capacity, an integrated traffic system, medians with protected left turns, a roundabout, bus turnouts, streetlights, signage, and raised medians, more than 7.5 miles of bike lanes, including more than 2.5 miles of separated bike lanes, a half-mile of multi-use trail, crosswalks, a bridge, and countdown signal heads.

“With this RAISE grant provided by the Department of Transportation, we will make our streets and bike lanes safer, better connect our residents to transportation

services, and strengthen our local and regional infrastructure for generations to come – all while integrating equity and accessibility. Without a doubt, this $15 million grant will be transformative to Fontana and the Inland Empire and support every single resident living in the region,” Rep. Torres said.

Rep. Aguilar said, “I’m proud to partner with Rep. Torres to secure federal funding that meets the City of Fontana’s needs and will continue to raise the quality of life for our region.”

Warren was just as excited for PRAISE’s awarded money and the positive impact it will have on the city in general.

“This is a historic day for the City of Fontana. The “Building A Better-Connected Inland Empire” project will transform Fontana’s transportation corridors and create safe pathways for students and bicyclists. We are thankful to Congresswoman Torres and Congressman Aguilar for their work to secure RAISE Grant funding for Fontana,” said Warren.

With common goals like transportation safety, efficiency, accessibility, affordability, and sustainability, Inglewood’s ITC and Fontana’s “Building A Better-Connected Inland Empire” fit the criteria of what U.S. Transportation Secretary Pete Buttigieg was looking for when deciding which projects across the country should receive PRAISE awarded money.

“We are proud to support so many outstanding infrastructure projects in communities large and small, modernizing America’s transportation systems to make them safer, more affordable, more accessible, and more sustainable,” Buttigieg said.