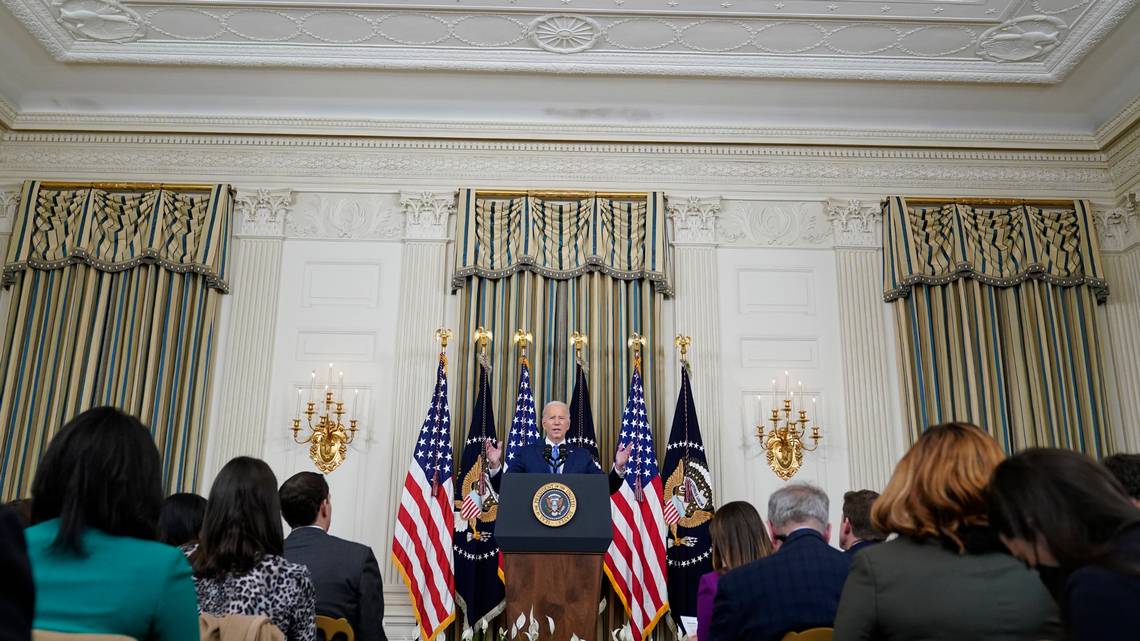 WASHINGTON (AP) — President Joe Biden claimed vindication the day after the midterm elections, saying Democrats had “a strong night” and he planned to change nothing about his approach despite facing the likelihood of divided government in the nation’s capital.

“I’m prepared to work with my Republican colleagues,” Biden said during a post-election news conference Wednesday. “The American people have made clear they expect Republicans to work with me as well.

He brushed off concerns that Republicans, who are on track to take control of the House, will investigate his administration and family in what could swiftly become a bruising stretch of his presidency.

“I think the American people will look at all that for what it is, almost comedy,” he said.

The White House said later Wednesday that Biden had spoken by phone with Rep. Kevin McCarthy, R-Calif., who is in line to become House speaker if Republicans win the majority.

In his first public comments since voting ended, Biden was celebratory and defiant as Democrats denied Republicans the sweeping victory they expected. His party still has a potential path to hold control of the Senate, which would preserve his ability to nominate federal judges and administration officials.

“While the press and the pundits were predicting a giant red wave, it didn’t happen,” Biden said.

The election results were a remarkable display of resiliency in the face of both history and gloomy polls that suggested voters were fed up with inflation and crime and looking to punish the party in power. Biden acknowledged that many Americans remain discouraged by the country’s direction.

“The voters were also clear that they’re still frustrated,” he said. “I get it.”

Even so, Biden expressed little interest in changing course on his agenda, saying: “I’m not going to change anything in any fundamental way.”

The benefit of his policies, such as funding for infrastructure projects and limits on prescription drug costs, “takes time to be recognized,” he said.

Biden said he planned to call Republican congressional leaders, and he opened the door to seeking compromise with them — without shifting on his top priorities. He also questioned whether Americans want the major changes some Republicans are seeking, such as revisiting Social Security or Medicare benefits.

Biden was joined by first lady Jill Biden at his press conference, and he said it’s “ultimately a family decision” about whether to run for a second term.

His team has been making preparations for another campaign, and Biden said “my intention is that I run again.” He said he doesn’t “feel any hurry one way or another” about making an announcement, which could come early next year.

It’s unclear if the midterm results will be enough to enable Biden to move ahead strongly toward a second term. An expansive survey by AP VoteCast revealed deep worries about his performance and ability to continue serving.

With Biden approaching his 80th birthday, 58% of voters said he does not have the mental capability to serve effectively as president. Only 44% described him as honest, and just 34% said he’s a “strong leader.”

There were other warning signs for his political standing as well.

When Biden was elected two years ago, 54% of voters described him as someone who “cares about people like you.” Among this year’s midterm voters, that slipped to 46%.

Overall, 57% of voters said they had an unfavorable view of Biden. His approval ratings on the economy, energy policy and border security were underwater. Even his handling of Russia, widely seen as a success for Biden as he maintains an international coalition to oppose the invasion of Ukraine, is viewed negatively.

His lukewarm ratings were driven by overwhelmingly negative attitudes among Republicans, but even Democratic voters were not resounding in their support.

About 2 in 10 voters for Democrats said they disapprove of Biden’s job performance overall, a noticeable softness in today’s hyper-partisan political environment.

The survey of more than 94,000 voters nationwide was conducted for nine days, concluding as polls closed, for The Associated Press by NORC at the University of Chicago.

A clear advantage for Biden, who campaigned for office on simply being better than the alternative, is the disdain that his supporters have for his predecessor.

While 50% of voters for Democratic candidates said their votes were meant to show support for the president, an even greater percentage — 65% — said they voted to express opposition to Donald Trump.

“Democrats were arguing from the beginning that they needed to make this election a choice rather than a referendum,” said Amy Walter, an analyst who leads the Cook Political Report. “And essentially, they did.”