Home > National > A Year After Jan. 6 Attack, Investigation Is Still Ongoing, Scars Are Still There

A Year After Jan. 6 Attack, Investigation Is Still Ongoing, Scars Are Still There 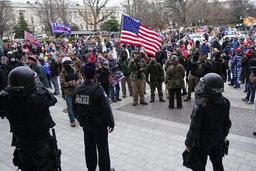 Washington, D.C. — One year after Americans were horrified by this sight of former President Donald Trump supporters rampaging through Congress, the investigation is far from over. In fact, it’s just beginning.

Although more than 700 people have been arrested for the Jan. 6 terrorist attack, that’s just the tip of the iceberg. The FBI estimated about 2,000 people were involved in the attack on the Capitol. And that’s not including the people who helped organize the event.

So it seems the FBI, the Department of Justice and the House Select Committee on the Jan. 6 Attack will be busy for the next coming months looking into the case.

According to news reports, the committee, led by Rep. Bennie Thompson (D-Miss,) is looking into ties between the attackers and the Trump administration. The committee’s investigation is believed to end in criminal referrals to the Department of Justice.

“Information we have received has been quite revealing about members of Congress involved in the activities of January 6th as well as staff,” said Thompson in a press conference.

In an interview with ABC’s “This Week,” she said Trump’s actions during the attack showed that he was not fit for higher office.

Cheney is referring to the almost two hours the former president spent not taking any action while the country was under attack.

Attorney General Merrick Garland has faced widespread criticism for not taking a stronger stance against the Jan. 6 attackers. Many of the attackers have received slaps on the wrist.

However, news reports say, Garland will address members of the Justice Department later this week, so that may change.

A year after the attack, the Capitol has returned to normal, but there are still invisible scars. A recent Washington Post article said some of the Capitol staffers who lived through the attack had found other forms of employment. The Capitol police has suffered losses as many officers refused to return to work because of physical and emotional wounds.

Some of the high-profile officers, such as Michael Fanone, have left the police department. Fanone became a prominent critic of Republicans’ lax attitude towards the attack. Fanone was tasered multiple times and nearly lost his life during the attack.

However, he recently joined CNN as a commentator. According to news reports, some members of the police force were not happy with Fanone’s strident criticism of the way the attack was handled. Police unions backed Trump.

Another victim of the Jan. 6 attack, Sgt. Aquilino Gonell, recently lashed out against politicians such as former Vice President Mike Pence.

In an interview with Christian Broadcasting Network, Pence accused the media of “playing up the attack,” even though Trump supporters threatened to hang him.

Gonell was incensed by those comments.

“And we did everything possible to prevent him [Pence] from being hanged and killed in front of his daughter and his wife. And now he’s telling us that that one day in January doesn’t mean anything. It’s pathetic. It’s a disgrace,” said Gonell in a NPR interview.

But Pence’s attitude shows what has become a partisan reality about Jan. 6. The majority of Americans, and Democrats, considered the attack to be an assault on democracy. But a recent poll showed Republicans believe the complete opposite.

A Washington Post-University of Maryland poll showed that about 60% of Republicans still believe the election was stolen from former Trump, even though there is no evidence of this. Many Republicans believe the attackers were patriots who were defending democracy.

CNN reporter Donie O’Sullivan recently interviewed Trump supporters and quizzed them about the Jan. 6 attack. Most of them repeated conspiracy theories, such as claiming the attack was organized by antifa or the FBI.