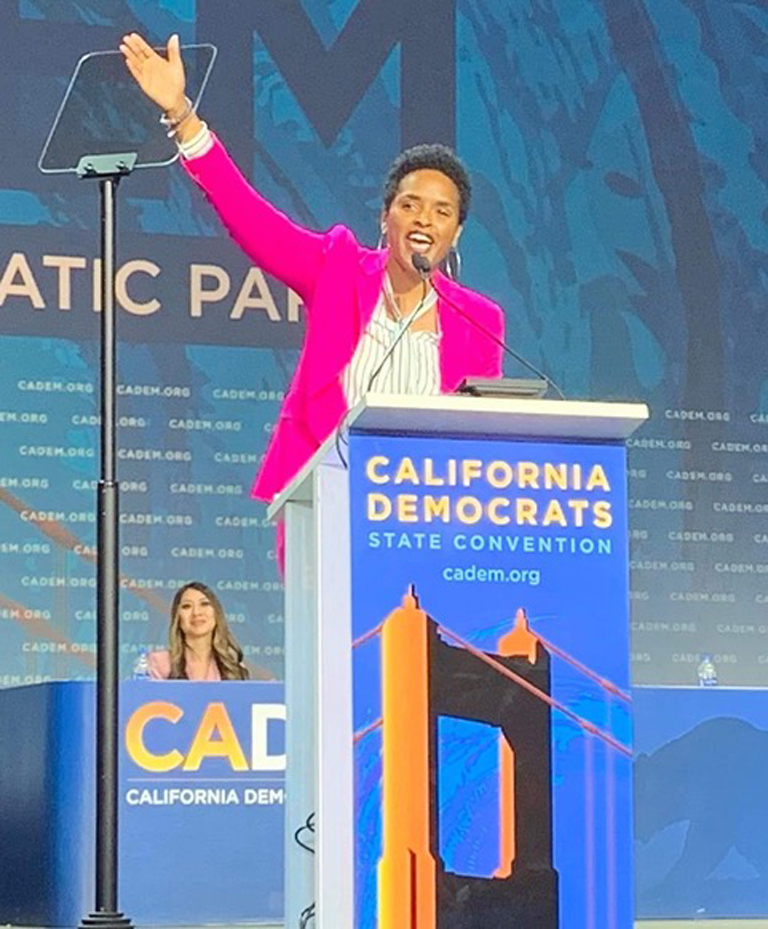 How did Kimberly Ellis, an African American progressive Democrat and Bay Area grassroots activist, lose her second bid for chair of the California Democratic Party (CDP)?

During her last run for the job in 2017, Eric Bauman, who resigned amid sexual harassment allegations last November, only beat Ellis by a razor thin margin of 62 votes. Her near-win two years ago emboldened her supporters – their candidate could become the first Black woman to serve in the state party’s executive role in more than 30 years.

Depending on who’s responding, each answer to the question about Ellis’ loss falls somewhere between deepening fault lines of race, gender and politics that seem to be testing the strength of the Democratic Party, foreshadowing divisions that could open up even more as the party moves toward the 2020 election primary season.

Echoes of the Bernie vs. Biden rift between grassroots progressives and establishment Democrats and rumblings about the persistent marginalization of women voters and candidates all seemed to be playing out locally in the politics leading up to this year’s CDP elections.

Many African American Democrats attending the convention, especially the women who voted for and supported Ellis, say their frustration with the party’s leadership’s routine neglect of African American issues and candidates is reaching its peak.

“Kimberly Ellis’ campaign gave us all insight into the inner working of CDP and its voting bodies,” said K. Patrice Williams, an African-American woman and delegate from Solano County. “A world of special elections, held in January during off years on weekends between 10 and 1 PM, of which Black and Brown voters were not aware. We have now received a painful lesson in the world of super-delegates. State and federal elected officials that refused to vote for the most qualified, solutions-focused candidate who happened to be an intelligent, dynamic Black Woman.”

The CDP held the vote for chair this past weekend during the state party annual convention themed “Blue Wave Rolling” at the Moscone Center in San Francisco.

More than 3,000 delegates voted Saturday night. Of that number, about 57 percent cast their ballots for the winning candidate Rusty Hicks, a prominent union leader from Los Angeles, backed by a majority of elected officials, most of the state’s organized labor groups and several influential party insiders.

Ellis, who secured the support of the Bernie Sanders-affiliated “Our Revolution,” other progressive and moderate Democratic groups, and a cross-section of African American and other women voters, lost to Hicks by at least 25 percentage points. About 36 percent of delegates voted for her.

The remaining votes were spread among five other candidates who contested, including current state party vice chairman Daraka Larimore-Hall. About six percent of the delegates voted for him.

The CDP held its annual convention this year in the midst of a firestorm of racial discrimination and sexual harassment allegations that have unsettled the party and resulted in a leadership crisis since former chair Bauman’s resignation last year.  In April, Tina McKinnor, an African American woman and former operations director of the CDP, cited several incidents of alleged racial discrimination in a lawsuit she filed against the organization. Two men, John Vigna, former communications director, and a party activist, Spencer Dayton, have also filed separate lawsuits against the CDP, claiming former chair Bauman sexually assaulted them.

For some of the Black women Democrats who supported Ellis, her loss is as a stinging reminder.  Although their ballots often represent the deciding vote in critical national and local elections, Black women candidates typically have had a harder time attracting broad enough support from other voting blocs to win statewide races.

“If I, as a young black woman in this party, can’t see myself in leadership, then what’s the point?” Dallas Fowler, an African American woman and a delegate from Los Angeles told the LA Times.  “This is a majority-minority state, and until our party really shows up and puts our money and our time and our muscle behind these communities to ensure that we have adequate representation, we’re not going to see that.”

The CDP is also facing an internal uprising, according to some of its more left-leaning members, because they sense the state party priorities increasingly reflect the wish lists of big donors and corporations rather than the interests of members who do the ground work to elect Democratic candidates during elections and who fight for Party ideals every day.

“We say that we support campaign finance reform,” said Ellis, who stresses that she did not accept any corporate donations for her campaign.  “I think it’s a fair question for us to ask, what are we doing as a state party to advance that value?”

Ellis, whose Facebook bio reads “Disrputor-In-Chief @Unbought-Unbossed” also touts herself as an independent advocate for the average Democrat, including young people, women, minorities and other groups who feel left out by the party’s establishment.

In his acceptance speech, Hicks, current president of the Los Angeles County Federation of Labor, said his plans as CDP chair include a zero tolerance policy on sexual harassment, an effort to unite various factions of the party –  including progressive Democrats who supported Ellis – and preparation for the Democratic primary in March and national elections in November.

“We should embrace the passion that comes into the party, and also remember what our party is singularly focused on – and that’s seeing a change in the White House in 2020,” he said.

Ellis congratulated Hicks and thanked her supporters and the delegates who voted for her in a statement she shared the morning after the election.

“Party politics is always going to be tough and often disappointing,” she said. “But great change is never easy. So many delegates put a tremendous amount on the line in the face of extraordinary pressure. Certainly, there are challenges for us ahead, and I hope our new chair can bring harmony to our party during these difficult times.”

For Ellis’ supporters, their fight for equity and recognition in the CDP is just beginning.