State Leaders Kick Off $100.3M Census Push with Call to Ethnic Media, CBOs to Help Get Word Out 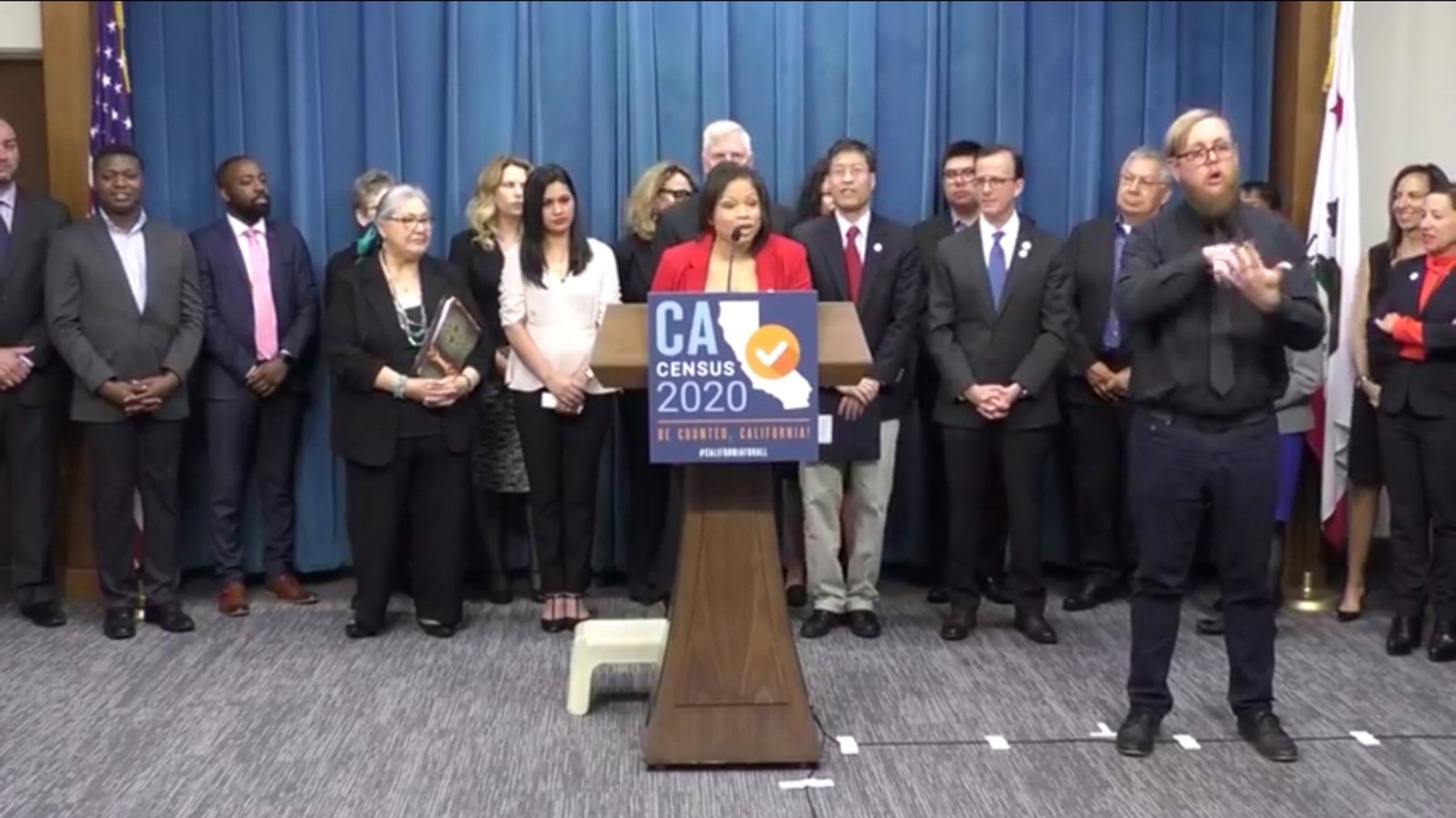 Statewide — California isn’t playing around in its effort to avoid an undercount in the 2020 Census.

That determination was clear April 2 when the California Complete Count (CCC) office assembled a mixed group of stakeholders – advocates, state officials, legislative leaders and community members – to kick off an anticipated $154 million statewide public information campaign. The event was held exactly one year away from Census Day 2020.

“California is determined to ensure we achieve a complete census count. We’ve started early and are committing more resources than any other state on a robust outreach and engagement effort to reach all Californians,” said Ditas Katague, Director, California Complete Count – Census 2020. “Our collaborative partnerships throughout the state will make a difference in 2020, which may be the most difficult Census count yet for California.”

To reach the high mark its setting for itself, the CCC is encouraging ethnic media, community-based organizations and other groups they are calling “trusted messengers” to apply for bids in a third round of funding as it finalizes its Census 2020 communication push. The office says the new contracts will be funded from a $22.9 million pot allotted to designated groups called Administrative Community Based Organizations in 10 regions of the state. The second source of funding, $26.6 million, will be channeled through county administrations.

So far, the state has invested $100.3 million to support its overall Census outreach. Gov. Gavin Newsom has proposed an additional $54 million in the 2019-2020 budget.

Last month, during its second round of funding, CCC announced it selected California Calls, an LA-based community organization comprised of 31 local grassroots groups, to lead its African-American outreach ahead of next year’s national Census.

“My district and California as a whole have some of the hardest to count populations in the country, but we’re going to make sure everyone counts,” said Speaker of the California State Assembly Anthony Rendon who represents an electoral area in southeastern Los Angeles. “The Census is coming and it’s important. We all need to use our good reputations to remind everyone in every community to participate.”

California Calls joined 13 other local community groups from across the state in the $4 million partnership with CCC. They are tasked with reaching out to ethnic minorities and other hard-to-count groups to ensure maximum participation.

The US Census has always undercounted African Americans and the reasons are mostly economic. Correctly counting all the individuals in households with multiple or multigenerational families called “sub families” is a major factor. Other variables like families without permanent housing, incarceration, homelessness, homes without broadband subscriptions and low literacy can all come into play.

During the last national survey in 2010 alone, US Census field representatives missed nearly 800,000 Blacks across the country and overlooked roughly 7 percent of all Black children. Other racial and ethnic minorities have been similarly undercounted as well.

“I represent one of the most undercounted census districts in California,” said Assemblymember Reggie Jones Sawyer (D-Los Angeles).  “It is imperative that we work to change the chronic undercounting of my district and many other disadvantaged communities throughout the state.”

On March 29, CCC held a bidders’ conference in Sacramento to share information about the state’s Census 2020 priorities, the proposal process, application requirements and project deliverables with interested contractors and sub-contractors.  People who attended could show up in person or patch in through a teleconference line.

CCC told interested organizations  to submit strategic plans by May 2019. Their proposals should include details of how they would spread the word about the 2020 decennial to the least-likely-to-respond people in the state and lay out the ways they would motivate them to participate.

Regina Brown Wilson, executive director of California Black Media, says she is encouraged by the steps the governor’s office is taking to address the “solvable” undercount problem.

“We Black community leaders and media professionals – are committed,” she said.  “We are looking ahead, and we are ready to do everything on the front-end, with all the tools that we have available to us, to prevent yet another undercount in the 2020 Census.”

Inaccurate Census counts can lead to billions lost in federal funding for states. Those decreases can be far-reaching in disadvantaged communities that need the cash for things like social programs, infrastructure or schools.  The number of Representatives a state is allotted in the US Congress is also determined by the Census count.

“The 2020 Census will shape California’s future for the next decade,” said Assemblymember Marc Berman, chair of the Assembly Select Committee on the Census. “California is a big, bold, beautiful, diverse state – and because of that, we’re also the hardest to count in the country.”

Research about past undercounts found that two demographic groups – immigrants and young, usually poor, unmarried women with children of all races – are overlooked the most.

The 10 regional administrative community foundations that the CCC announced at its quarterly meeting March 12 will be tasked with working with the local County Complete Count Committees, local community-based and grassroots organizations to help and get the word out.