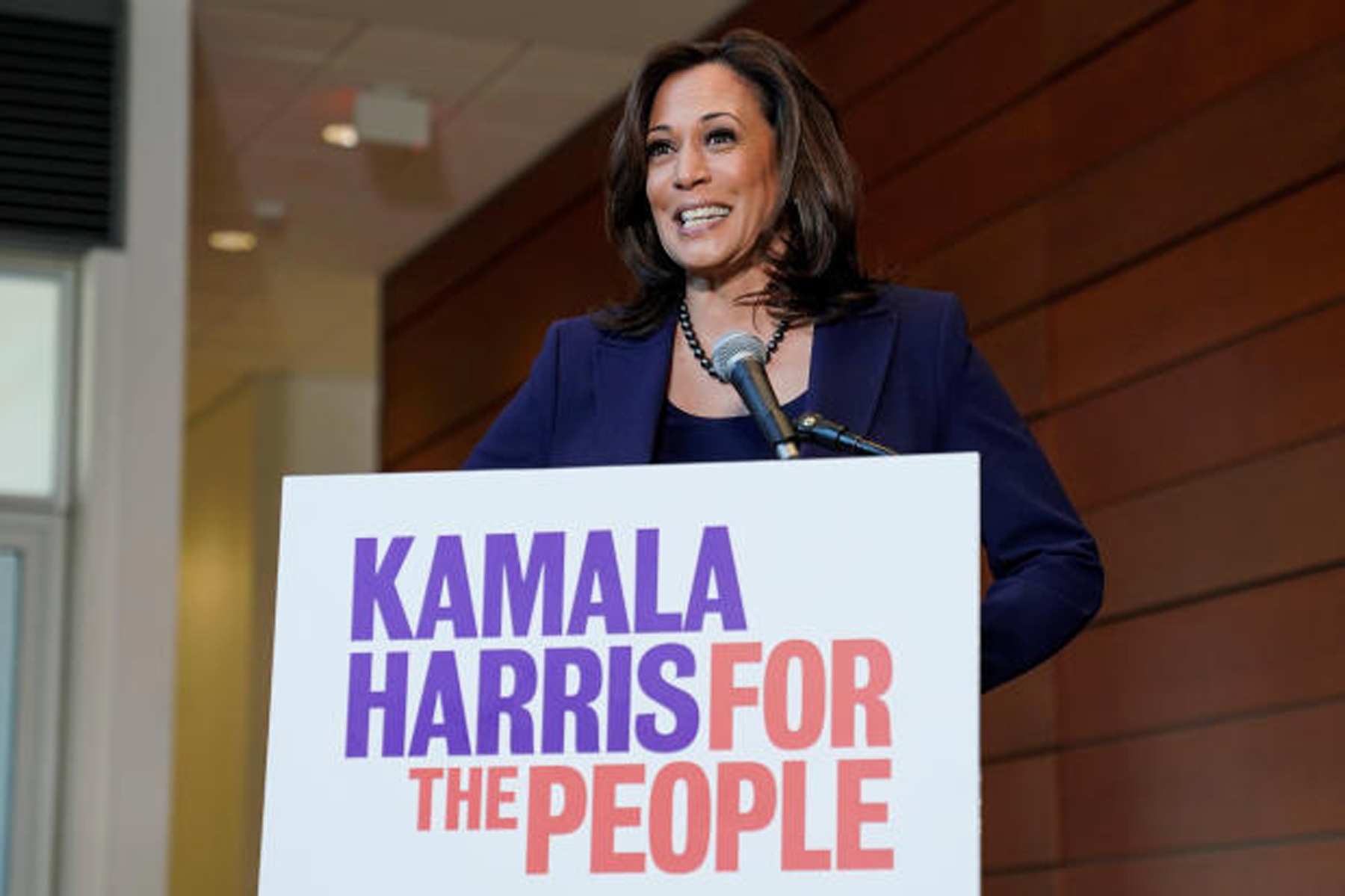 Senator Kamala Harris of California said Monday she’ll pursue the Democratic presidential nomination in 2020, a decision announced with deliberate symbolism on Martin Luther King Jr. Day that cuts to the heart of a potentially history-making candidacy.

Harris, a daughter of a Jamaican-born father and Indian immigrant mother, would be the first black woman as well as the first Indian-American in the Oval Office. Her message focused on social justice and inclusion is aimed at a diverse Democratic electorate eager for representation, while offering a stark contrast to President Donald Trump’s brand of nostalgic nationalism.

“Truth, justice, decency, equality, freedom. democracy – these aren’t just words. They’re the values we as Americans cherish, and they’re all on the line now,” Harris says in a video released on Monday as she also announced her candidacy on ABC’s “Good Morning America.” “That’s why I’m running for president of the United States. I’m running to lift those voices.”

But she’ll have plenty of rivals, some of whom are better-positioned to appeal to the ascendant economic-populist wing of the Democratic Party.

Harris’s likely path to the Democratic nomination runs through black voters, who made up a quarter of the primary electorate in 2016 and were critical to nominating Hillary Clinton, as well as to electing Barack Obama in 2008 and 2012.

The backing of African Americans, who dominate the Democratic electorate in early primaries like South Carolina, which is expected to hold its primary in late February 2020, followed by other Southern states in the first half of March, would make her formidable.

Winning her delegate-rich home state of California, which votes relatively early on March 3, compared with its 2016 primary in early June, could make Harris the favorite.

“Kamala Harris has – on paper – the clearest path to the Democratic nomination because of her potential appeal to various elements of the Democratic Party and new prominence of the California party,” said Dan Pfeiffer, a communications strategist for Obama’s 2008 campaign and White House. “Having said that, being best on paper is often not worth the cost of the paper.”

Her first campaign stop will be on Friday in Columbia, South Carolina, a Harris aide said, while revealing some early hires Monday. Her campaign manager will be Juan Rodriguez, who ran her 2016 Senate campaign; her campaign chair will be her sister, Maya Harris; and the communications director will be Lily Adams, who’s been working in her Senate office.

Challenges abound for the 54-year-old first-term senator. She lacks a paper trail on economic issues important to many on the left, leaving her vulnerable to competitors like Senator Elizabeth Warren of Massachusetts, whose calls to curb income inequality and Wall Street influence date back decades. Harris’s 13-year record as a district attorney and California’s attorney general has prompted criticism from progressives who argue she wasn’t tough enough on banks and fought to uphold convictions tainted by exculpatory evidence.

“The question becomes: what is her economic populist plan and how does that pass the smell test for progressives?” said Symone Sanders, a former spokeswoman for Bernie Sanders’ 2016 campaign. The Vermont senator won over liberals who oppose free-trade deals, favor a larger safety net, and want to crack down on Wall Street.

Waleed Shahid, a spokesman for the left-wing activist group Justice Democrats and a Sanders delegate in 2016, said Harris is “a blank slate” to many voters.

“Right now, she hasn’t proven herself to be a class warrior pushing for solutions as big as the scale of our problems,” Shahid said. “It’s also likely that her record on criminal justice and banking reform as California AG will continue to plague her if she doesn’t adopt a more aggressive message and propose big progressive solutions.”

Harris may also have California rivals to fend off in Los Angeles Mayor Eric Garcetti and Representative Eric Swalwell, whose district is in the Bay Area, both of whom are considering 2020 runs. And some of her California colleagues may support one of her out-of-state rivals.

“I’ve been clear that I would support Bernie Sanders or Elizabeth Warren, but I do think she should run,” said Representative Ro Khanna, a fellow Indian-American who represents a district just south of Oakland, where Harris was born.

The Democratic congressman said Harris is “formidable” and “not to be dismissed,” but that Warren and Sanders are “two extraordinary progressive icons, and barring something unforeseen I’m likely to support one of them.”

Harris doesn’t shy away from the term “identity politics,” which she’s described as a cudgel used to marginalize issues like civil rights and immigrant rights. While Trump and his coalition of largely white, often older voters represent a shrinking share of the population, Harris’s hopes in a general election would require stitching together a younger, diverse and more female coalition that’s ascendant in the U.S. but votes less reliably.

First elected to the Senate in 2016, she received national attention for her aggressive questioning of Supreme Court Justice Brett Kavanaugh in the Senate Judiciary Committee, earning plaudits from the left and criticism from the right.

The Californian’s pro-immigration positions, including an early refusal to compromise on Trump’s border wall, has endeared her to activists prominent in the Latino community. She was the first senator to call on Homeland Security Secretary Kirstjen Nielsen to resign for carrying out Trump’s family separation policy for illegal border-crossings. Immigration activists say she seeks their counsel and describe her as knowledgeable about the issue.

She’s highlighted racial disparities between whites and blacks on maternal mortality and criminal sentencing. Last year, she campaigned for two prominent black politicians: gubernatorial candidate Stacy Abrams in Georgia, and Senate nominee Mike Espy in Mississippi. She may not be the only black candidate in the field, with others like New Jersey Senator Cory Booker also considering a run.

“You have to actively compete in the Southern states. You need those black votes. You can’t be the Democratic nominee without them,” Symone Sanders said, adding that the black community’s overwhelming support for Clinton was “definitely a big barrier” between the Bernie Sanders and the 2016 nomination.

“All the black voters in the southern states from Mississippi to Georgia and in between don’t necessarily know who Senator Harris is. Her name ID is not very high,” Sanders said. “So, she’s trying to carve out her space,” she said, noting that Harris is trying to strike a balance between speaking pointedly to constituencies like African Americans while highlighting issues – like cash bail – that have broad consequences across racial and ethnic lines.

The 2016 presidential election came down to about 80,000 votes in three states – Pennsylvania, Wisconsin and Michigan. If the Democrats’ 2020 nominee can flip those back and hold the states Clinton won, Trump will be a one-term president, and there’s enormous hunger among Democratic voters to pick a candidate who’s likely to defeat him. For Harris, that means persuading primary voters that she has a winning message on economic issues like trade, which powered Trump in the Midwest.

“I think because it’s the year of the woman, she’ll have the ability to lean into that. She is one of the best-positioned candidates of color,” Sanders said. “But she still has to work for it.”