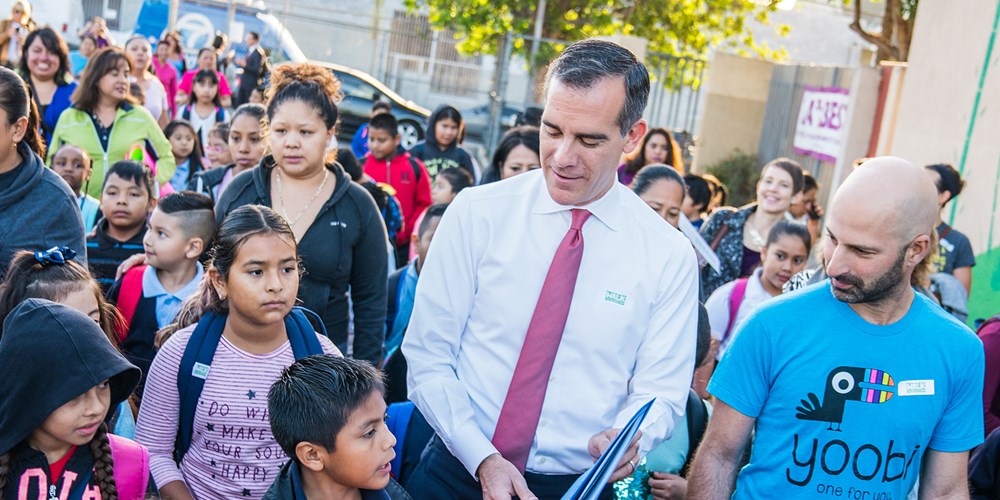 Los Angeles, CA — Despite a 36%, $1.6 billion increase in revenues since Eric Garcetti was elected the Mayor of Los Angeles in 2013, the City still has an unbalanced budget for the fiscal year beginning on July 1, 2018 and a Structural Deficit that will total more than $4 billion over the following four years.

In signing the budget, Garcetti said it was “cementing dramatic new investments in the fight against homelessness; making street, sidewalk, and traffic safety improvements; and boosting reserves to help protect the City against future economic uncertainties.”

While this slick, but distracting, political posturing is standard operating procedure, Garcetti’s claims that the budget is “fiscally prudent and economically conservative” do not pass the smell test as a more realistic budget shows a short fall in the range of $250 million.

The upcoming budget does not account for an estimated $40 million in raises for the City’s civilian employees pursuant to a new labor agreement that will replace the current contract that expires on June 30.

The City is also relying on $75 million in new revenues from the Street Damage Restoration Fee ($62 million) and digital billboard revenues ($13 million).  But these revenues are very controversial, have not been authorized by an ordinance, and will be subject to litigation if approved.

Finally, the City’s budget is banking on $45 million in efficiencies from potential reductions in expense accounts, salaries, and the pavement preservation program.

As part of the budget process, the City Administrative Officer prepares a Four-Year General Budget Outlook that projects revenues, expenditures, and the budget gap.  Over the next four years, revenues are expected to increase by 10% to a record $6.8 billion.  At the same time, the Structural Deficit (where expenditures increase faster than revenues) will be eliminated as the budget gap of almost $160 million in 2020 will turn into a surplus of $100 million in 2023.  Over this four-year period, the cumulative gap is anticipated to be $77 million.

But once again, the Outlook does not take into consideration the increase in salaries for the City’s employees since they are not covered under existing contracts.  If annual increases for the civilian employees ($40 million) and sworn employees ($35 million) are factored into the Outlook, the $100 million surplus in 2023 turns into a $239 million shortfall in 2023 and the four-year cumulative budget gap increases to more than $900 million.

But it gets worse when you consider the Garcetti’s failure to fund the necessary repair and maintenance of the City’s streets and the rest of its deteriorating infrastructure (a minimum of $250 million a year), the need to build adequate reserves for when the economy hits a down draft ($50 million a year), and the increased annual contributions to the City’s two underfunded pension plans using a more realistic investment rate of return ($500 million a year).

The net result is annual deficits of more than $1 billion a year and a four-year cumulative deficit of $4.2 billion.

The abject failure of Mayor Garcetti to recognize the true cost of the City’s current operations is Intergenerational Theft, where the future of next generation … or two or three … of Angelenos is devoured by tens of billions of liabilities incurred by today’s grossly negligent politicians. Do you steal from your kids?

It is time for Garcetti to be honest with us. He needs to be open and transparent about the City’s messed up finances.  This includes not only town hall meetings, but implementing the Herb Wesson endorsed recommendations of the LA 2020 Commission to establish an Office of Transparency and Accountability to oversee the City’s finances, to form a Commission on Retirement Security to recommend solutions to eliminate the massive unfunded liability of the City’s two pension plans, and to engage in long range budgeting and planning.

Will Garcetti honor his Back to Basics Priority Outcome to have the City “Live Within Its Financial Means.” Or will he wimp out, afraid to be honest with hard working Angelenos who are paying the bill for his political follies?