Home > Uncategorized > May is American Stroke Month: What to Know Now

May is American Stroke Month: What to Know Now

For patients experiencing ischemic stroke — the leading cause of disability in the U.S., according to the Centers for Disease Control and Prevention — the time it takes to receive treatment is critically important for avoiding irreversible brain damage. While getting evaluated by a specialist used to take up to several hours, new in-ambulance technology being tested by hospitals nationwide is helping patients get evaluated within minutes.

May is American Stroke Month, and a good opportunity to learn how a new technology known as In-Transit Telestroke (ITTS) may transform the field of stroke treatment. With ITTS, stroke neurologists can examine patients by using video technology from ambulances, decreasing the time between a patient’s onset of symptoms and crucial treatment.

“In the case of strokes, every moment count, and thanks to ITTS, we’re able to deliver treatment faster than ever before,” says Gary Belt, M.D., stroke neurologist at Atlantic Health System’s Overlook Medical Center in Summit, N.J., a not-for-profit multihospital system and the first in the country to implement ITTS technology.

Recent research highlights the benefits of this technology: patients evaluated with ITTS in ambulances while in-transit to the hospital can be treated with the brain saving drug alteplase 13 minutes faster than those patients not assessed until they are in the emergency department (referred to as door-to-needle, or DTN, time), according to a recent study by researchers at Overlook Medical Center and Atlantic Health System and published by the journal “Stroke.”

The first-of-its-kind study assessed 89 presumptive stroke patients in ambulances over 15 months from January 2015 through March 2016. Atlantic Health System paramedics responding to neurological emergencies used an InTouch Xpress device — a portable unit with a high-definition camera, microphone and screen — allowing video communication with a stroke neurologist who performed a neurological evaluation of the patient while in-transit to the emergency department. Once the patients arrived at the participating hospital’s emergency department, the neurologist assumed care and, when indicated, administered alteplase, a tissue plasminogen activator (TPA) that breaks down blood clots to restore blood flow to the brain.

“We are constantly looking for ways to treat stroke patients as quickly as possible, as each passing minute of lost blood supply translates to more brain damage,” says John J. Halperin, M.D., senior study investigator and chair, department of neurosciences at Overlook Medical Center. “Our observations suggest that pre-hospital evaluation with telestroke may provide a scalable, affordable way to speed stroke treatment, as well as more rapidly direct patients to the centers capable of performing the procedures that will serve their needs best.” –Statepoint 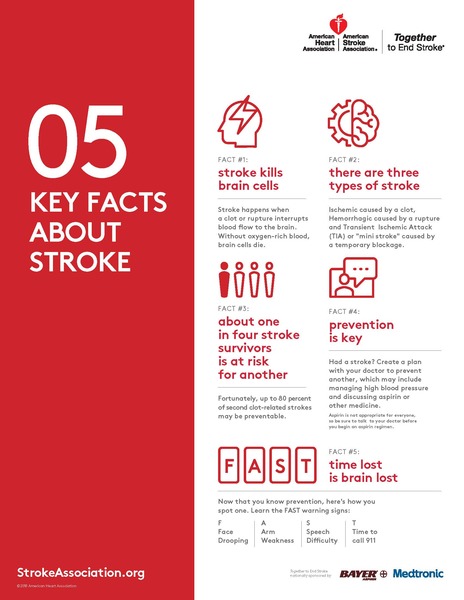