School Shooting May Not Bring Change to Gun-Loving Texas

Austin, Texas (AP) — Texas has more than 1.2 million licensed handgun owners who can openly carry their weapons in public. The state hosted the National Rifle Association’s annual meeting two weeks ago. And until Monday, the governor’s re-election website was raffling off a shotgun.

Guns are so hard-wired into Texas culture that last week’s deadly rampage at Santa Fe High School is considered unlikely to result in any significant restrictions on access to weapons in the Lone Star State.

Republican Gov. Greg Abbott reacted to the killings of eight students and two teachers by calling for a series of roundtable discussions on school safety, starting Tuesday in Austin. He said last week that he wants to find ways to keep guns away from those who pose an “immediate danger to others.”

But the state’s 20-year dominance by the Republican Party all but guarantees the meetings will be dominated by calls to boost school security and “harden” campuses — an idea backed by the NRA — instead of demands for gun restrictions, said Cal Jillson, political science professor at Southern Methodist University.

That’s in sharp contrast to the response to the Feb. 14 shooting rampage at a high school in Parkland, Florida, that left 17 dead. Three weeks after the bloodbath, Florida politicians defied the NRA and passed a gun control package after a lobbying campaign led by student survivors of the attack.

“The difference in Texas is the Republican Party is in complete control. It is unchallenged at the state level,” Jillson said. “Even the young people from Santa Fe are not full-throated advocates of gun control to keep the children safe.”

In fact, at a church service Sunday, Santa Fe High student Monica Bracknell, who survived the shooting, told the governor the attack should not be turned into a battle over gun control.

Similarly, Callie Wylie, a 16-year-old Santa Fe High student who dropped off flowers Monday at a memorial for the shooting victims, said the violence is not a “gun problem.”

“Obviously things need to change. Something needs to happen. This has happened way too much,” Wylie said. “But I don’t think at this time people need to be pushing politics on us and telling us, ‘Oh, this is gun control.’”

Sentiments like those could give Abbott political cover if his roundtable discussions don’t lead to major changes.

Gun control advocates around the country have long pressed for such measures as expanded background checks and a ban on assault rifles and high-capacity magazines, but such measures would probably have had no effect on the Santa Fe High shooting.

Abbott has said he wants the roundtable discussions to include lawmakers, educators, students, parents, gun-rights advocates and survivors of the November church shooting in Sutherland Springs, Texas, that killed two dozen people.

Tuesday’s meeting will include officials from school districts that arm some teachers or contract with local police for security. The governor’s office said most of the meeting will be held in private.

School officials said students won’t return to classes until after Memorial Day — on Tuesday, May 29.

Galveston County Sheriff Henry Trochesset said Monday police were able to “engage” the shooter four minutes after they were called. He said the shooter was contained until his arrest, with minimal gunfire from law enforcement officers, to the art classroom where his bloody rampage was focused. That allowed the rest of the school to be evacuated safely.

How much time elapsed from the moment gunfire erupted until the last victim was shot remains unclear. Trochesset said he doesn’t think any additional students were shot after officers confronted the shooter but can’t make a final determination until autopsies are completed.

Abbott and Texas Republicans have embraced a steady relaxation of gun laws in recent years. Since 2013, Texas has reduced the cost and hours of training needed to be licensed to carry a handgun, allowed “open carry” for handgun license holders, and allowed concealed handguns in college classrooms and dorms.

In 2015, Abbott tweeted he was “embarrassed” that Texas lagged behind California in gun sales. In 2017, he bragged about his accuracy with a pistol at a shooting range. In a speech to the NRA convention in Dallas, Abbott said, “The problem is not guns. The problem is hearts without God. It is homes without discipline and communities without values.”

On Monday, Abbott’s re-election campaign scaled back its shotgun raffle in the wake of the Santa Fe shooting, replacing it with a raffle for a $250 gift certificate. A photograph of the governor aiming a shotgun was removed.

After the Florida tragedy, President Donald Trump organized discussions on how to prevent school shootings and at least mentioned the idea of limiting gun sales, though little concrete came out of those. Abbott so far has committed to even less.

Texas holds primary runoffs Tuesday, meanwhile, and the Santa Fe shooting is not expected to be a deciding factor in any major race, just as the Sutherland Springs massacre barely registered as a campaign issue before last week.

But she was quick to add: “That doesn’t mean I’m against guns. I’ve worn a gun over 40 years. It means I’m against stupidity.”

In a letter to the governor on Monday, Democratic state lawmakers urged Abbott to consider gun control measures that failed to pass in previous sessions.

Still, Lizzie Pannill Fletcher, a lawyer who is favored to win a runoff for the Democratic nomination in a potentially flippable, Republican-held congressional district in Houston, not far from where Friday’s shooting took place, refrained from criticizing the governor for not doing more than organizing discussions.

“I hope that these discussions move us closer to real reform,” Fletcher said Monday. “Our lives depend on it.”

1.      Santa Fe, Texas, resident, Lori Simmons prays for healing in front of 10 wooden crosses at Santa Fe High School on Monday, May 21, 2018, in Santa Fe. Republican Gov. Greg Abbott reacted to the killings of eight students and two teachers by calling for a series of roundtable discussions on school safety, starting with one on Tuesday in Austin. He said last week that he wants to find ways to keep guns away from those who pose an “immediate danger to others.” (Steve Gonzales/Houston Chronicle via AP) 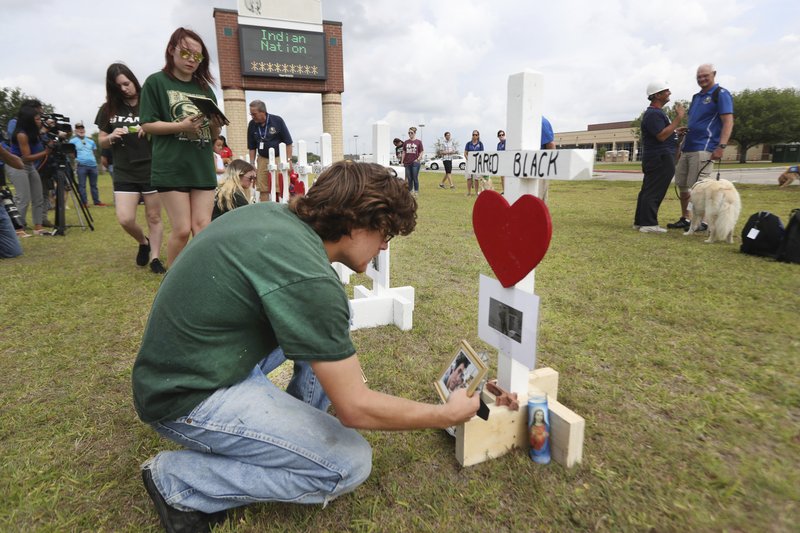 1.      Santa Fe High School students, parents and the community observed a Moment of Silence Monday, May 21, 2018, in Santa Fe. Texas Governor Greg Abbott has called for a moment of silence at 10 a.m. Monday morning to remember the victims of the Santa Fe School Shooting. (Steve Gonzales/Houston Chronicle via AP) 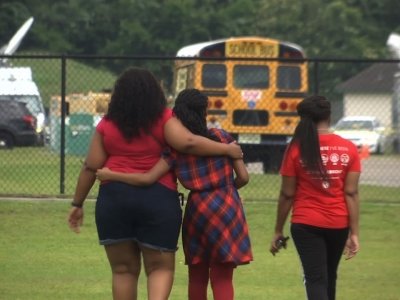 1.      Jai Gillard was in class when a 17-year-old student came in and started shooting. On Friday, 8 students and 2 staff members were killed at Santa Fe High School. Gillard remembers a friend she lost and the terrifying moments during the shooting. (May 21)