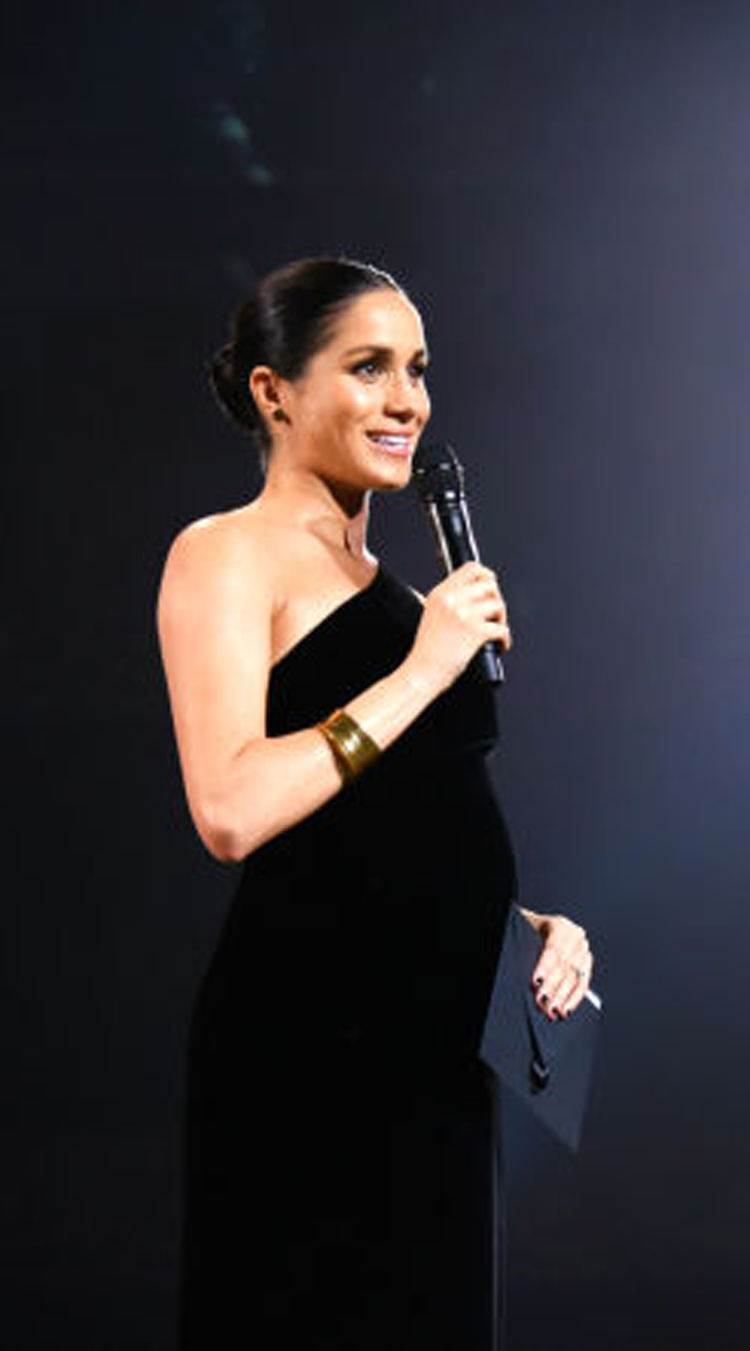 Attendees of the 2018 British Fashion Awards were in for a treat, as the world’s most famous expectant mother made a surprise appearance at Royal Albert Hall on Monday night.

Wearing a one-shouldered black column gown by Givenchy, Meghan, Duchess of Sussex (née Markle) was on hand to honor her wedding dress designer, Clare Waight Keller, artistic director of Givenchy, with the British Womenswear Designer of the Year award.

“It is such an honor to be here celebrating British fashion and British fashion designers in my new home of the U.K.,” Meghan said to the thrilled BFA audience, according to People. “It’s so nice to see so many familiar faces, many of you I’ve known for quite a while and there’s been a lot of you I’ve been able to meet in the last year,” British Vogue reported. “So, thank you for the warm welcome.”

No doubt much of the thrill was seeing how much the duchess’ baby bump has grown since her last major appearance; her first child with Prince Harry is due next spring. Accessorizing her otherwise simple but elegant look, which she kept sleek with a center-parted low bun, Meghan opted for strappy gold leather “Karat” heels by Tamara Mellon and a trio of gold bracelets by Pippa Small, made by craftspeople of the Turquoise Mountain Foundation in Afghanistan and benefitting their communities. The duchess also wore a dark burgundy manicure to cradle her bump; a departure from her typically nude nails (and a break from royal protocol).

The appearance was one of many times Meghan has worn Givenchy since her nuptials in May, indicating an ongoing closeness and collaboration between the duchess and the designer, which Waight Keller acknowledged while accepting her award, specifically for trusting her to design her now-iconic wedding gown.

“Lastly, I was going to thank you,” said Waight Keller, gesturing at the Duchess. “Because this woman is so amazing. I got to know Meghan on such a personal level, and to have someone like that trust you in an incredible moment in their life is just such an unbelievable honor, and I can’t thank you enough.”

Other big winners on Monday night? Virgil Abloh, who took home the Urban Luxe award for the second consecutive year, and symbolically passed the torch to his former assistant-turned-Emerging Menswear Designer of the Year, Samuel Ross, who earned the prize for his streetwear label, A-Cold-Wall*.

“Samuel, since his time as my assistant to now, has been a part of this new breed of design,” Abloh told British Vogue in a profile on Ross. “[He has] affirmative intention and [is] precise in his execution in garments as well as ambience.”

And while this year saw three strong black contenders for Model of the Year (including Adut Akech, Adwoa Aboah and presenter Winnie Harlow) it was second gen sensation Kaia Gerber (daughter of supermodel Cindy Crawford) who ultimately scored the win. Nevertheless, the British fashion set was out and dazzling on Monday night; you can see for yourself in our slideshow below.