Home > Lifestyle > Wondering When You’ll Get Your Stimmy? Here’s What the Big Banks Say

Wondering When You’ll Get Your Stimmy? Here’s What the Big Banks Say 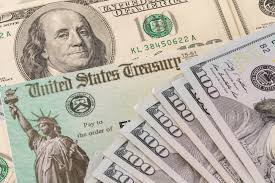 Though President Biden signed a landmark $1.9 trillion stimulus bill into law last Thursday, many Americans are still waiting to receive their portion of the COVID-19 relief funds.

The White House said that people could expect to start seeing the money in their bank accounts by last weekend, which indicated an understanding of just how long-awaited the $1,400 (previously touted as $2,000) checks are.

And some Americans have received their deposits, but if you’re one of the many who haven’t—like myself—don’t start worrying yet. People who bank with JP Morgan Chase and Wells Fargo should receive their funds on Wednesday, March 17, according to a report from CBS News.

That leaves a whole lot of people still waiting for their stimmy checks. But the banks say the holdup is on the part of the IRS.

The organization that manages electronic transfers said on Monday that the IRS set the settlement date of March 17, and added that there is “no mystery” about where the money is. “It is still with the government,” Nacha, the organization that governs the ACH Network, told CBS MoneyWatch in a statement.

It added, “The IRS chose the date of March 17, which is the date on which the IRS intends for settlement to occur.” It added that the payments should clear into accounts at 8:30 a.m. ET on March 17.

There you have it—if you have a bank account on file with the IRS and filed taxes in 2019 or 2020, by Wednesday morning you should join the 85 percent of Americans who Biden has said will get a direct payment of $1,400. Some banks already credited the funds to their customers in anticipation of getting the settlement from the IRS on Wednesday. Other people may receive their funds in the coming weeks in the form of a paper check. Married couples and people with children can expect a payment for each person in their household.