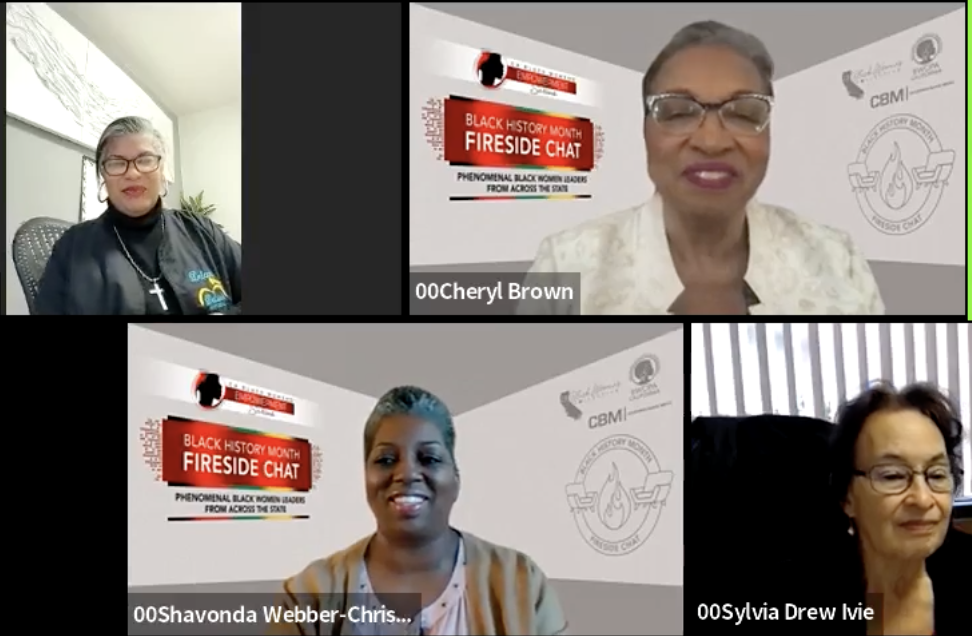 The organization also held a series of panel discussions leading up to the celebration and highlighted several policy priorities, including aging and elder care.

The Hon. Cheryl Brown, a retired California Assemblymember and a Commissioner on the California Commission on Aging said 23% of Black women live in poverty, which is the second highest percentage in the U.S. — only behind Native American women.

Brown pointed out that Gov. Gavin Newsom set aside $2 billion for the Master Plan on Aging, a 10-year project, but she questioned, how would the people the money is intended to help access the money. Brown said currently there are not effective systems in place to inform people about the help they need.

The funds, she said, will funnel down through the California Department of Aging down to county agencies.

“That’s why it’s critical to get involved on those levels,” Brown emphasized.

Ahead of Women’s History Month, a group of influential California Black women brought their perspectives together last month in a virtual “fireside chat” to take a broader look at aging and elder care in the Black community.

Whether they were expressing the joys of caring for a loved one or exposing the range of challenges Black women face as they age, the panelists shared useful insights that could shape public health policy or improve ways African American caregivers attend to the needs of aging family members.

“This is our third event as part of the California Black women Empowerment series,” said Yvonne Wheeler, a member of the strategy team of the CBWC. The event was organized in partnership with Black Women Organized for Political Action (BWOPA).

“Our goal is to talk about the issues that are important to Black women in California and today the topic is ‘Black Women Aging With Dignity and Respect.’”

During their remarks, panelists outlined resources Black women need to make sure that their needs are met while elevating some concerning statistics.

“Black women in California have many barriers in their everyday life. As we get older, the issues don’t change. The issues just get more complicated,” said Regina Brown Wilson, moderator of the event and Executive Director of California Black Media.”

“Before COVID-19, we were already experiencing financial hardship, poor health outcomes, and when the pandemic hit, older Black women were among the most vulnerable because of their circumstances, Wilson stated. “Approximately 80% of Black women are breadwinners who earn 40% of the household income. Seventy-four percent of Black women breadwinners are single mothers.”

shed light on issues that Black women experience as they age in their older years.

Webber-Christmas said it is critical to ensure that there are culturally competent providers helping Black women navigate resources available to them and to make sure that they are practicing the self-care they need to maintain long, healthy lives.

“If you’re missing food, your likelihood of being healthy is low. So, we do try to look at the whole person and not just medical needs when we talk about the services that we contract for, or services that we provide grants for. We want those to be holistic,” she said, highlighting some of the wraparound social services LA Care provides to the people it serves.

“I think that when we talk about older women, we’re not talking about someone who just became that person,” Webber-Christmas added. We’re talking about someone, if you look over the life course of the individual, it’s incremental. What we are doing today determines what we experience in later life.”

Sims spoke about the experiences of Black women who live longer and the various challenges they face as caregivers. Her own father lived to be 115 years old, she shared. Sims said taking care of him became a challenge as his other caregivers aged.

“It was daunting to say the least, to be sort of thrust into caregiving and not being prepared, but just feeling like it was something I absolutely needed to do to honor my mother and certainly my stepfather. But that is also one of the challenges,” said Sims.

She encouraged Black women caregivers to seek emotional support, avoid missing meals, talk to someone and even join a support group.

Brown said Black families must take a collective look at caring for their aging loved ones.

“We have to look out for each other,” she said. “It has to be an inter-generational thing.”

Kellie Todd Griffin, convenor of the CBWC said there is an emerging trend of communal living among Black single mothers.

“They are buying homes together. Sharing in the costs of daycare and helping each other out. We have to be creative,” she said.

Griffin said it is also important for Black women to organize.

“We have got to raise our voices and knock on doors. When we show up at the Capitol and in those district offices, that’s when they start listening to us,” she pointed out. “It is important to show up to those town hall meetings that legislators have in their communities.”