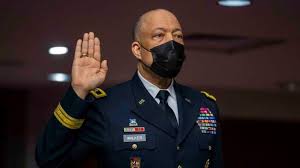 By: Terelle Jermaine Starr, The Root

For the first time in House history, a Black person will assume the role of the chamber’s chief law enforcement officer.

William Walker, the former head of the Washington, D.C., National Guard, became the first Black House sergeant-at-arms Monday after House Speaker Nancy Pelosi swore him in, according to the Hill.

The sergeant-at-arms job, in a nutshell, is to keep House members safe and to create and review protocols for safety for all of the elected members of the House chamber; the Senate has its own sergeant-at-arms. It is one of those positions you never hear about because they primarily work behind the scenes.

They make sure that everyone who is in the chamber is properly vetted and keep up with any security threats. The sergeant-at-arms coordinates with Capitol Police and other intelligence agencies to ensure elected officials are safe.

Walker will also have a prominent role Wednesday when he escorts President Joe Biden through the House chamber for the president’s first congressional address.

Walker was the head of the National Guard when insurrectionists raided Congress back in January. He testified earlier this year that Army leaders expressed concern over optics when debating deploying the National Guard to repel MAGA supporters storming the Capitol grounds.

“The Army senior leaders did not think that it looked good, it would be a good optic. They further stated that it could incite the crowd,” Walker said at a Senate hearing in March.

It took hours for him to get the OK to act, according to the New York Times.

Here is more on that, per the Hill:

But according to Walker, Army officials said that “it would not be their best military advice to have uniformed Guardsmen on the Capitol.”

Walker fills the vacancy left by the previous House sergeant-at-arms, Paul Irving, who resigned after the Jan. 6 insurrection.

Pelosi said upon announcing Walker’s appointment in late March that his experience “will be an important asset to the House, particularly in light of the January 6 insurrection.”

“His historic appointment as the first Black American to serve as Sergeant-at-Arms is an important step forward for this institution and our nation,” Pelosi said at the time.

Hopefully, they will let him do his job this time.