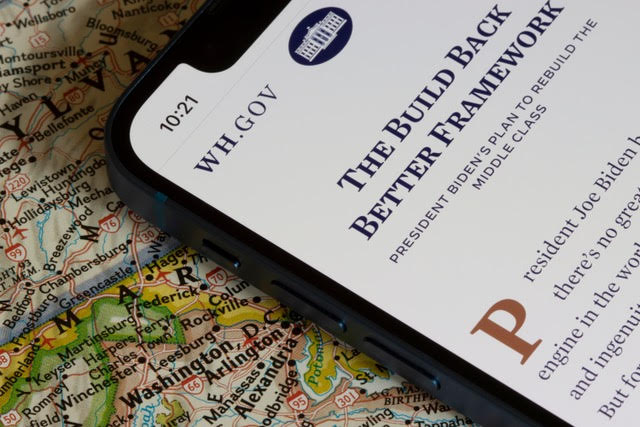 California is one of many states whose policies helped to shape President Joe Biden’s $1.75 trillion Build Back Better plan, according to Gov. Gavin Newsom and Assistant to the President and White House Domestic Policy Advisor Susan Rice.

The U.S. House of Representatives held a procedural vote last Friday that cleared the way for a full floor vote on the legislation, which could happen as early as next week.

“California’s values will be on the national stage with the Build Back Better plan. @POTUS is creating good jobs, investing in clean energy to fight climate change, helping families through at-home elder, disability & child care, universal pre-k, & more,” Newsom’s office tweeted about a week before the U.S. House of Representatives voted last Friday night 228 to 206 to approve Biden’s other signature bill, the $1.2 trillion infrastructure bill.

The infrastructure bill and its companion Build Back Better Act are central pieces to the President’s plan to jump start the U.S. economy and put it on the road to recovery after surviving a sharp downturn brought on by the COVID-19 global pandemic.

“It’s a once-in-a-generation investment that’s going to create millions of jobs modernizing our infrastructure – our bridges, our roads, our broadband, a whole range of things,” said Biden on Saturday morning, celebrating the passage of the infrastructure bill that he is touting as “bipartisan.” Thirteen Republican members of the House broke ranks with their party and voted for the bill.

“To turn the climate crisis into an opportunity; and it puts us on a path to win the economic competition of the 21st century that we face with China and other large countries and the rest of the world,” Biden said.

Rice held a press conference Nov. 4 during which she discussed the Build Back Better plan and accompanying infrastructure investments. She praised California and other states for policies such as paid family medical leave and universal pre-K as “concepts that we believe are well proven that we want to take national.”

“I think the ideas and initiatives in here have many fathers and mothers,” Rice said in reference to the Build Back Better plan. “This legislation reflects in many ways what we think are the kinds of investments that we know reduce costs for families, that improve outcomes for children and their parents.”

The Build Back Better plan is a framework for investments and programs geared toward leveling the playing field on multiple fronts following the COVID-19 pandemic.

Gene Hale, President of the Greater Los Angeles African American Chamber of Commerce, praised the passage of the infrastructure plan and says he looks forward to the Build Back Better Act becoming law. But Hale says, for him and other Black business owners across the country, too many details remain unclear.

“How will Black-owned and minority-owned businesses benefit from trillions of taxpayer money being directed to cities and states?” Hale asked. “What kinds of mechanisms are in place – or will be put in place – to make sure that this money is distributed equitably. We cannot continue to just talk about equitable investments, we have to take concrete steps to make sure these programs reach the people around the country who need them most.”

Hale said Black leaders are organizing to hold the White House and California governor accountable as federal funds get funneled down to states and municipalities.

Some of the items the Build Back Better Act focuses on are climate change, healthcare, and community violence intervention.

During an exclusive interview with California Black Media, White House Senior Advisor for Public Engagement Trey Baker talked about how the Infrastructure Framework will aim to provide access to clean water in struggling communities.

“This is the companion piece of legislation that is going to bring everything from Build Back Better and also an Infrastructure Framework that is going to really go into helping communities to be able to pull all of the lead pipes out of the ground,” Baker said.

For African Americans and other minorities, Baker said he believes environmental justice has to be central to climate change initiatives.

“The big deal on climate and environmental justice issues is that we have to be on equal footing with other communities when it comes to the environment and the importance of caring about it in the first place,” Baker said.

Expressing his concerns about the plan, Sen. Joe Manchin (D-WV), has said his fellow Democrats employed “shell games” and “budget gimmicks” to superficially reduce the cost of the framework just to get votes to pass it.

Rice responded by stating specific sections of the legislation she believed contributed to Manchin’s hesitation.

“As he said himself very clearly and publicly, we heard in our process of consultations and negotiations that Sen. Manchin is opposed to including paid family and medical leave in the reconciliation legislation. Now whether he changes his mind or comes to see it differently, we can certainly hope. But its inclusion at this point in the House bill is very consistent with our original desires, our priorities, and what we worked to try to accomplish in our consultations and negotiations with members of the Senate and the House,” Rice said.

The framework addresses healthcare and medical disparities by investing in coverage for the uninsured, hearing coverage, and maternal health for Black women.

“The pandemic laid bare a lot of the disparities that are currently in our communities,” Baker said.

“What the Build Back Better Framework will do is to close the gap with Medicaid coverage so the cost of getting insurance will be less for people,” Baker continued.

Build Back Better will also invest in evidence-based community violence intervention to help reduce gun violence as well as the chances of violent police interactions in Black and Brown communities.

Baker clarified that the initiative is not meant to replace traditional policing, but to add to it.

“One great impact that the community violence intervention program is going to have is helping to take some of the burden off of police in this country. We’re talking about leveraging trusted messengers, we’re talking about having individuals in our communities who can intervene in conflicts, connect people to social help, wellness, and employment services that will reduce the likelihood of violence overall,” Baker said.