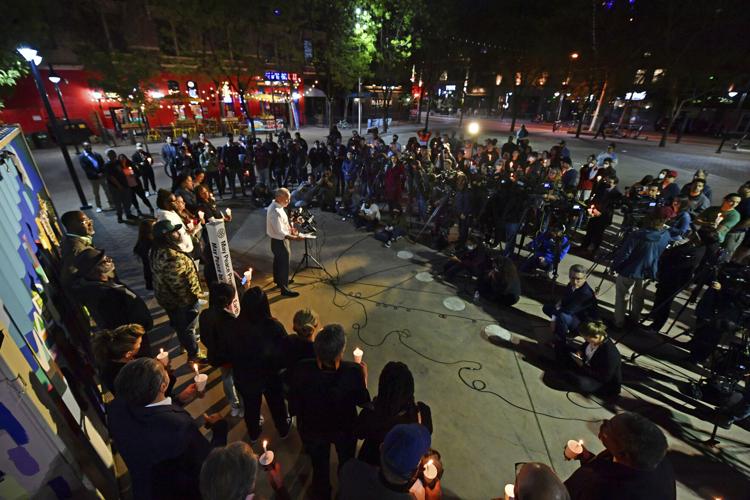 The Sacramento Police Department (Sac PD) has made two arrests in the mass shooting that happened in the early hours of April 3 in downtown Sacramento.

Dandre Martin was booked Monday for felony assault and illegal firearm possession charges, according to Sac PD. Charges against Smiley Martin, who was hospitalized after sustaining injuries during the shooting, are for possession of a firearm by a prohibitive person and possession of machine gun.

According to public records, the younger Martin has an outstanding arrest warrant in Riverside County for violating two terms of his probation related to a domestic violence arrest in 2014.

Six people died from the shooting. The 12 wounded individuals who survived the incident suffer from minor to critical gunshot wounds. They are all in stable condition.

The investigation is ongoing.

As the investigation progressed, Sac PD Special Weapons and Tactics (SWAT) team and other detectives served search warrants at three residences in an area that has yet to be disclosed. At least one handgun reportedly related to the shooting has been recovered.

and bars, a popular after-work hangout for politicians, staffers and other government workers. Around 2:00 a.m., Sac PD officers responded to the sounds of shots fired in the busy part of downtown around 10th and K Streets, four blocks east of the Golden 1 Center where the NBA’s Sacramento Kings play. Over 100 rounds were reportedly fired into a crowd.

Clark said he was with Harris’s wife Leticia Harris when a Sac PD Captain, at Clark’s insistence, told her about her husband’s death. Clark said Mrs. Harris was “out there all (Sunday) morning,” trying to get information.

“This is so sad. It breaks my heart” Clark said. “This is community violence.”

The Sacramento County District Attorney’s Office will be “reviewing all related evidence in this investigation” to determine appropriate charges, the Sac PD stated.

On the afternoon of Apr. 3, Sacramento Police Chief Kathy Lester said a “stolen handgun” was recovered at the scene.

Sunday’s mass shooting is the second in Sacramento in under two months. On Feb. 28, five people were shot and killed after a man opened fire at a church in the state’s capital. The man shot and killed his three children and a man who was with them before taking his own life.

No link has been established between the mass shooting and organized crime, but gang activity has been on the rise in Sacramento.

In November 2021, California Attorney General Rob Bonta announced the results of a multiagency investigation into Sacramento-based criminal street gang activity that resulted in a number of arrests.

Gangs in the area are allegedly responsible for a series of violent crimes, including homicides. A total of 26 individuals were arrested, and more than 125 firearms were seized by state agents.

Most of the firearms confiscated were assault weapons, including “ghost guns.”

Ghost guns are un-serialized and untraceable firearms that can be purchased online and assembled. They are often sold through “ghost gun kits.”

Lester did not provide details of the stolen handgun used in Sacramento’s most recent shooting, but the SAC PD chief said a semi-automatic, high-velocity weapon was used.

“What happened is the biggest and most recent example of what we all know,” Lester said at a news conference hours after the deadliest shooting in the city’s history. “Gun violence is truly a crisis in our community, and it has increased not only here in Sacramento but across the nation.”