Trump Tries to Spin COVID-19 Diagnosis as Win, But Public Isn’t Buying It 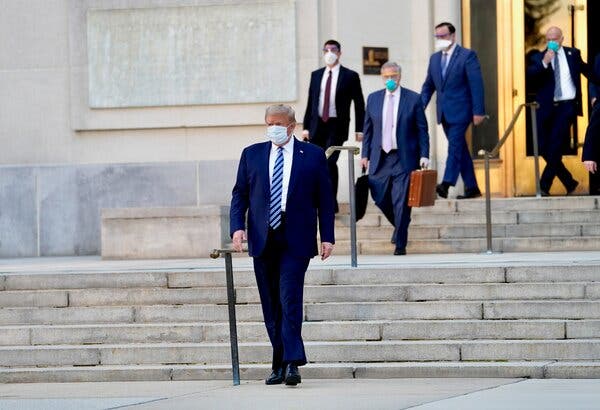 Nationwide — The recent COVID-19 outbreak at the White House is a perfect example of how the Trump administration has failed to handle the disease. Trump has tried to portray the disease as something that’s behind us. But the fact that about 210,000 Americans are dead and the disease has penetrated the inner sanctum of American power is living proof that it’s far from over.

The White House outbreak is believed to be linked to the Rose Garden ceremony, where Trump introduced Judge Amy Coney Barrett, his Supreme Court pick. No one at the ceremony was wearing a mask. Several high-profile Trump supporters have also come down with the disease. On Monday, Right-Wing Watch reported that John Hagee, senior pastor of Cornerstone Church in San Antonio, Texas, had tested positive for the disease.

Trump was hospitalized on Friday and plied with some of the most potent drugs recommended to coronavirus patients. This indicates that his health situation was a lot more severe than the White House let on.

“The president’s medical team also said that he had been prescribed dexamethasone. This is a steroid used to head off an immune system overreaction that kills many Covid-19 patients. And it is generally reserved for those with severe illness,” said The New York Times.

Trump’s team of doctors gave another frustrating press conference Monday where they refused to answer several questions and danced around others.

During his three-day hospital stay, Trump continually tried to spin the story to seem as if he was healthy and in control. Several photos of the president were released showing him surrounded by papers. But a closer look at one picture showed Trump was signing a blank sheet.

And over the weekend, Trump infuriated medical professionals when he left his hospital bed to go on a short car ride to wave at fans. At the time, Trump was supposed to be recovering from a COVID-19 infection and should have been in quarantine. His actions threatened the lives of his Secret Service detail.

“There was nothing about his little motorcade yesterday that was required or wise or necessary,” said Napolitano in a New York Times interview. “It was a superfluous act.”

But if you thought Trump’s brush with the coronavirus would have forced him to take the disease more seriously, think again.

In a tweet, he told the American people “not to fear COVID.”

However, Trump has created such an atmosphere of distrust that many people, including film director Michael Moore, doubt he ever had the coronavirus. Some conspiracy theorists suggest he staged the whole event to move the news cycle away from his taxes and his disastrous debate performance.

News footage showed the president returning to the White House on Monday. But he appeared to be gasping for breath and wincing. He also took off his mask as soon as he entered the building. The White House said it does not plan to make masks mandatory.

And although Trump and the right-wing media are trying to spin his bout with the coronavirus as a victory, the American public isn’t buying it. According to a CNN poll, most of the public think he’s done a poor job handling the coronavirus epidemic.

“Two-thirds of Americans say President Donald Trump handled the risk of coronavirus infection to others around him irresponsibly, according to a new CNN Poll conducted by SSRS in the days following the announcement that the President had contracted the virus that has disrupted everyday life for millions of people for more than half a year,” according to a CNN story. “… 69 percent of Americans said they trusted little of what they heard from the White House about the President’s health, with only 12 percent saying they trusted almost all of it.”