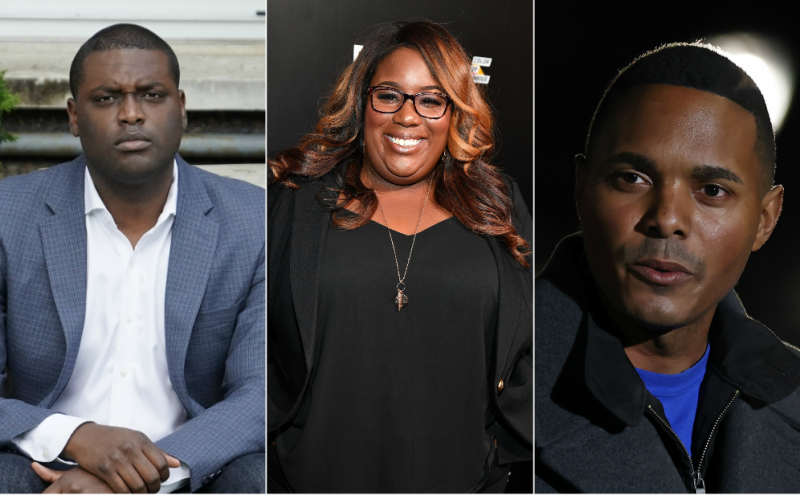 Nationwide — While it might’ve been an anxiety-ridden election night for most of us, for the LGBTQ community it was a historic night of triumph. Throughout the country, gay, queer, trans and non-binary candidates racked up congressional win after congressional win, prevailing over years of discrimination in order to put Black excellence at the forefront.

In New York, Buzzfeed News reports that Democratic Reps.-elect Ritchie Torres and Mondaire Jones will become the first openly gay Black men to serve in Congress. They’re set to make their grand debuts in the U.S. House of Representatives in January.

Prior to his win, Jones addressed the magnitude of the moment with CBS.

“It is a lot of responsibility,” he said. “I’m happy to be providing that kind of representation for so many young people and older people all throughout my district and all throughout this country who have reached out to me and said, ‘I’m so inspired by what you’re doing. You give me hope and I can be my authentic self in a world filled with so much injustice.’ It’s really an honor to be able to do that.”

Torres is no stranger to breaking barriers either. At the age of 25, he became the first openly gay elected official from the Bronx when he was elected to the New York City Council. He’s also been open in advocating for mental health while disclosing his own battles with depression.

“I think my own acknowledgment of struggling with depression flows naturally from the experience of coming out,” he told Buzzfeed News. “The process of coming out, the integrity that it demands from you […] has taught me how to be more open and honest about my struggle with depression. It teaches you an ethic of radical authenticity.”

In Florida, Michele Rayner-Goolsby became the first Black queer woman elected to Florida’s House of Representatives. A self-described “unapologetic Black woman,” Metro Weekly and the Advocate report that the civil rights attorney won the Democratic primary with approximately 30 percent of the vote. In August, she celebrated the fact that her team was “was led by a Black woman” and “anchored by women and women of color.”

“We won because we defined ourselves for ourselves,” she tweeted.

Now she has even more to celebrate.

“We’ve run a campaign focused on putting people over politics and that’s rooted in a commitment to working with and for residents until the change they seek is a reality,” she said in a statement. “This win proves that this community is […] tired [of] business as usual and ready for change, and I’m so grateful and humbled that the voters of District 70 have elected me to represent them in Tallahassee to move us closer to the change we all deserve.”

“I’m humbled to have earned the trust of the people of SD 35,” he tweeted on Tuesday night. “I am looking forward to serving you in the Florida Senate. Thank YOU! #WEthePEOPLE”

“Shevrin shattered a long-standing political barrier for LGBTQ candidates in Florida and his victory will resonate far beyond the boundaries of his state,” Annise Parker, president of the LGBTQ Victory Fund, which endorsed Jones and Rayner, said in a statement. “Shevrin has led on justice-related issues in the state House and his victory is certain to inspire more Black LGBTQ leaders to choose elected office as a way to make change. The politics of division and hatred failed in this race and gave way to a government that is more representative of the people it serves.”

Another one of our own who made history Tuesday night is Mauree Turner, who became the first openly non-binary person ever elected to a state legislature in the United States, according to the LGBTQ Victory Fund. Turner won a state House seat in Oklahoma and also becomes the first Muslim to ever serve in the state’s legislature.

A Democratic community organizer whose platform focused on criminal justice reform, a higher minimum wage and access to affordable healthcare, Pink News reports that the 27-year-old newcomer stomped out Republican Kelly Barlean with a projected 71 percent of the vote in order to win District 88 in Oklahoma City.

“I’m Black, Muslim, femme, queer, born and raised in Oklahoma—politics was the last thing in my crosshairs,” Turner told Huffington Post prior to their win. “Oklahomans have representation that doesn’t have our shared lived experience—that hasn’t been in a family that had to live off SNAP benefits, [or] a single-parent household because one parent was incarcerated. That was my upbringing, and it’s not a unique one.”

In Georgia, social justice advocate and Episcopal priest Kim Jackson enjoyed a decisive victory for a state Senate seat, according to Pink News. Since moving to Georgia a decade ago from a rural town in South Carolina, Jackson has championed criminal justice reform, bringing an end to the death penalty and equality for the LGBTQ community.

“Kim shattered a lavender ceiling and is paving the way for a state government that is more representative of the people it serves,” Parker said in a statement on behalf of the LGBTQ Victory Fund. “The energy and enthusiasm generated for Kim’s race will inevitably encourage more LGBTQ women and people of color to recognize their own viability and make the decision to run. […] Kim’s victory ensures our community has a voice at the table and gives hope that more are on the way.”

In Tennessee, 29-year-old Torrey Harris became the youngest openly gay state lawmaker in the history of Nashville after beating out incumbent John Deberry in the race for a seat in Tennessee’s State House. Harris, who serves as a board member for the Rainbow PUSH Coalition, Friends for Life Corporation HIV/AIDS Care & Prevention Services, and other groups according to The Advocate, won with nearly 80 percent of the vote.

“I’m just very excited that we finally have a representative in the state of Tennessee for district 90 who’s going to listen, in power and serve not just some of district 90, but all of the Tennesseans. We’ve worked very hard,” Harris told WMC5 Action News.

And though she isn’t African American, we still want to shout out Sarah McBride, who will become the highest-ranking transgender official in the country on Tuesday night after winning her Delaware state senate race. Prior to launching her congressional campaign, McBride interned with the Obama administration and was a spokesperson for the Human Rights Campaign, an LGBTQ advocacy group.

“We did it, we won the general election,” she tweeted. “I hope tonight shows an LGBTQ kid that our democracy is big enough for them too.”

Other non-Black members of the LGBTQ community to make history on Tuesday night include Charmaine McGuffey, who became both the first woman and the first open LGBTQ Sheriff in Hamilton County, Ohio; Brianna Titone, the transgender lawmaker who was re-elected to Colorado’s 27th House District; and Stephanie Byers, who became the first transgender representative in the history of the Kansas state legislature after winning a seat in the state House.