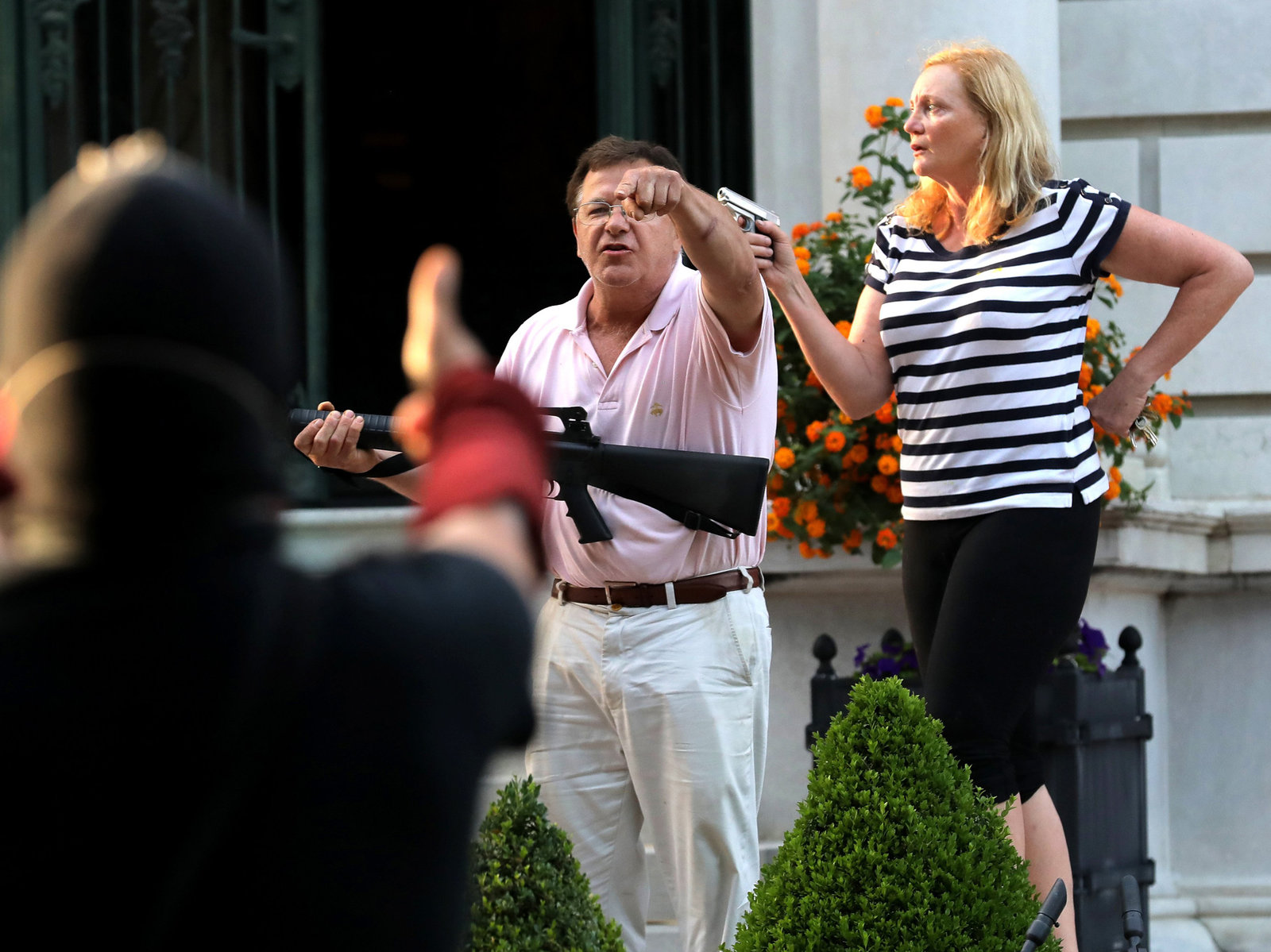 Photo Caption: Mark and Patricia McCloskey of St. Louis who brandished firearms outside their home were charged on Monday with unlawful use of a weapon, a class E felony. Laurie Skrivan/St. Louis Post-Dispatch/TNS via Getty Images.

Circuit Attorney Kimberly Gardner announced her office filed charges against Mark and Patricia McCloskey on Monday for unlawful use of a weapon. It is a class E felony.

“It is illegal to wave weapons in a threatening manner at those participating in nonviolent protest, and while we are fortunate this situation did not escalate into deadly force, this type of conduct is unacceptable in St. Louis,” Gardner said in a statement.

“We must protect the right to peacefully protest, and any attempt to chill it through intimidation will not be tolerated,” she continued.

The incident, which took place on June 28 and was captured on video, has drawn ire from Black Lives Matter supporters and praise from Second Amendment activists.

The images of the white couple standing in front of their mansion, with her aiming a handgun at the mostly Black crowd, and him clutching a long-barreled gun, flooded social media and all major news outlets almost immediately. The confrontation has stoked a heated partisan debate over the rights and protections of protesters.

The McCloskeys, who are both personal injury attorneys, have repeatedly stated they were frightened of the passing anti-racism demonstrators, calling the nonviolent group a “mob.”

The couple have said they feared for their lives and acted to protect their property. They also accused demonstrators of ignoring “No Trespassing” signs and knocking down an iron gate.

One of the protest leaders has contested their version of events, saying the gate was already open and no protesters damaged it.

Joel Schwartz, the attorney representing the McCloskey’s, did not immediately respond to NPR’s request for comment.

However Schwartz released a statement saying that the charges “are disheartening as I unequivocally believe no crime was committed.”

“I, along with my clients, support the First Amendment right of every citizen to have their voice and opinion heard,” Schwartz said.

“This right, however, must be balanced with the Second Amendment and Missouri law, which entitle each of us to protect our home and family from potential threats,” he added.

In the interim, Missouri Gov. Mike Parson said he would likely pardon the couple if they were charged.

On Monday, Gardener stated that she is committed to reducing the unnecessary involvement of the courts.

“I am open to recommending the McCloskey’s participate in one of my office’s diversion programs,” she said.

“I believe this would serve as a fair resolution to this matter.”