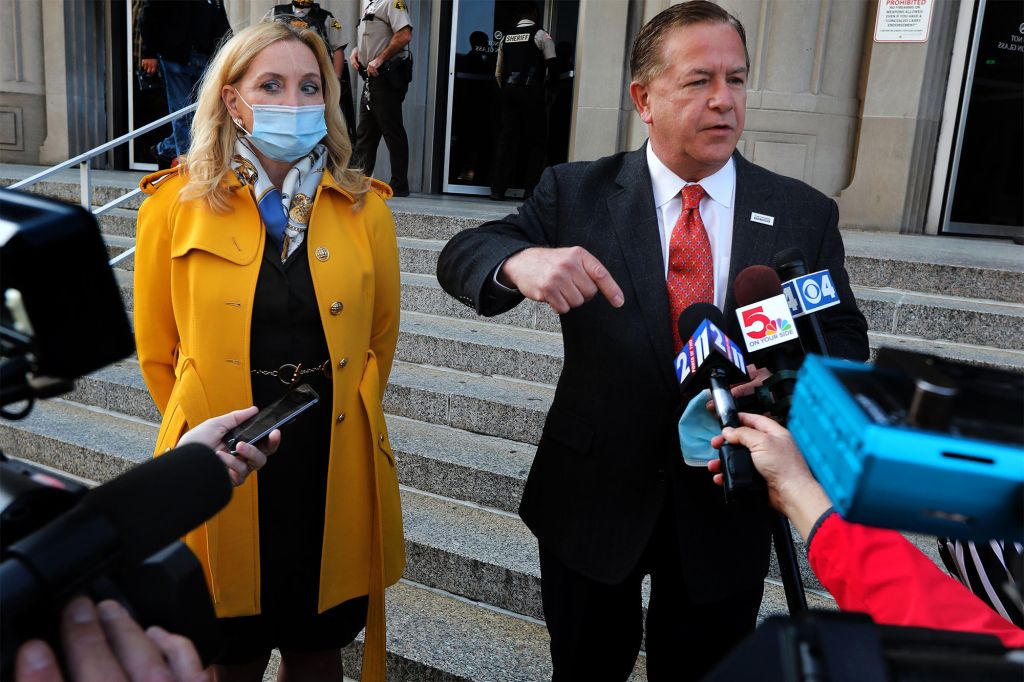 Louisville, KY — Mark and Patricia McCloskey—the only Ken and Barbie dolls curmudgeonous enough to fit in Donald Trump’s playhouse (and by “playhouse,” I mean the RNC)—have officially been indicted by a grand jury for brandishing guns at protesters in St. Louis, Mo., in late June.

The Associated Press reports that on Tuesday, Circuit Attorney Kim Gardner charged the couple with felony unlawful use of a weapon as well as tampering with evidence. No details about where the evidence tampering charge came from are available yet, but boooooy, Mark McCloskey is big mad about all of it.

Mark McCloskey, after a brief court hearing earlier Tuesday, expressed anger that he and his wife faced criminal charges while those who trespassed onto his property did not.

“Every single human being that was in front of my house was a criminal trespasser,” McCloskey said. “They broke down our gate. They trespassed on our property. Not a single one of those people is now charged with anything. We’re charged with felonies that could cost us four years of our lives and our law licenses.”

According to the AP, nine protesters were charged with misdemeanor trespassing in connection with the incident but those charges were later dropped by the city counselor’s office.

For the record, protesters claim the gate was never broken down. The McCloskey’s attorney provided photos that show a gate folded over after the protesters left, but video footage shows a man holding an intact gate open while protesters walked through, KSDK 5 reports.

To be fair, this Great Value Bonnie and Clyde couple stays dramatic. While everyone else who witnessed the June demonstration saw a peaceful protest, Mark described events in an interview like it was Lovecraft Country told from the perspective of white people who just want to be able to lynch negroes in peace.

“It was like the storming of the Bastille, the gate came down and a large crowd of angry, aggressive people poured through,” he said. “I was terrified that we’d be murdered within seconds. Our house would be burned down, our pets would be killed.”

The McCloskeys—who are both personal injury attorneys and definitely not Boris and Natasha cosplayers—were originally charged with unlawful use of a weapon in July. Since then they have become conservative hero-victims—as gun-wielding maniacs often are (*cough Kyle Rittenhouse *cough*)—and were even invited to give a whiney-lil’ -baby speech at the whiny-lil’ -baby convention in August.