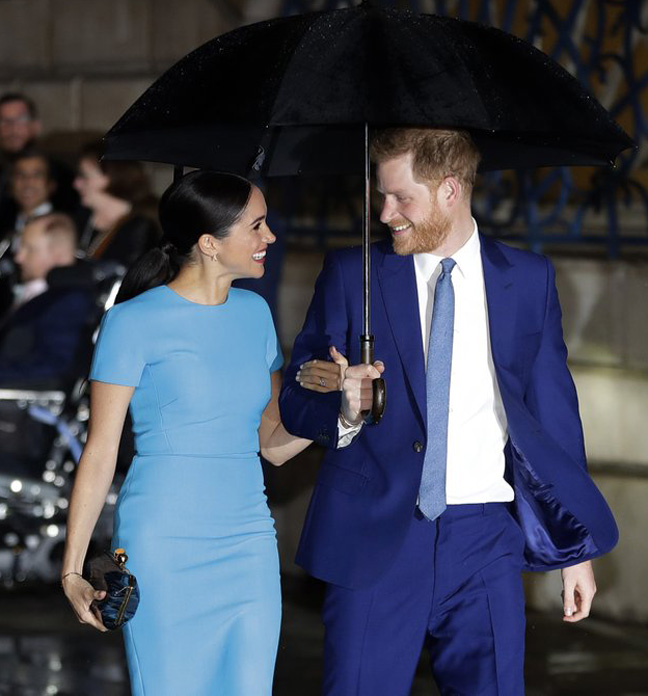 London, England (AP) — It’s definitely a farewell. But will it be fond?

Prince Harry and his wife, Meghan, the Duchess of Sussex, will fulfill their final royal commitment when they appear Monday at the annual Commonwealth Service at Westminster Abbey in London. It’s the last time they will be seen at work with the entire royal Windsor clan before they fly off into self-imposed exile in North America.

The service marks the end of a two-month drama that began when the couple announced plans to walk away from their roles as senior members of Britain’s royal family and into a world where they will have to earn a living, pay their own way and even open some doors for themselves.

It’s uncharted territory for the House of Windsor, even as the family seeks to downsize.

“I think this is a blow because I don’t think (the Windsors) would have envisaged that the slimmed-down monarchy would have actually meant that there was no role for Meghan and Harry,” said Pauline Maclaran, co-author of “Royal Fever: The British Monarchy in Consumer Culture.” “I mean, they really brought a new dimension to the royal family brand.”

It wasn’t supposed to happen this way.

Less than two years ago, Harry and Meghan were seen as a golden couple that would help extend the royal family’s appeal to a new generation. Their wedding on May 19, 2018, united a grandson of 93-year-old Queen Elizabeth II with the former Meghan Markle, a bi-racial American actress who had starred for seven years on the U.S. television series “Suits.″ George Clooney, Serena Williams and Elton John attended their wedding at Windsor Castle, which ended with the royal couple kissing for their flag-waving fans and riding through the streets in a horse-drawn carriage.

But the horses were barely back at the stable before pressures intensified on the couple, who became the Duke and Duchess of Sussex on their wedding day.

Even before the ceremony, Britain’s tabloid newspapers featured stories about a rift between Meghan and her father. When Meghan became pregnant, some commentators criticized her for jetting off to New York for a baby shower, a strange American tradition to many in Britain. Others lampooned Meghan’s politically correct pronouncements on the environment and women’s rights.

Meghan’s supporters saw racism at work. Harry publicly defended his wife and directed his anger at the intrusive media he has resented all his life because of the paparazzi’s role in chasing his mother, Princess Diana, on the night in 1997 when she died in a Paris car accident.

The prince himself was stung by media reports of a split between him and his older brother, Prince William.

The notion that the brothers and their glamorous wives would be a royal “Fab Four″ for the 21st century began to fade.

“For me, and for my wife, of course there’s a lot of stuff that hurts, especially when the majority of it is untrue, ″ Harry, 35, told ITV News last fall. “I will not be bullied into playing a game that killed my mum.”

Then in January, the couple sparked a royal crisis when they revealed that they intended to step back from their duties as senior members of the royal family. The move came after holiday pictures were released of the queen along with son Prince Charles, grandson Prince William and great-grandson Prince George. The future was pictured, and Harry wasn’t part of it.

In a personal statement, Harry and Meghan revealed that they intended to become “financially independent” and “balance” their time between the U.K. and North America, while continuing to honor and serve the queen. They wanted, in essence, to be part-time royals.

Hours later, Buckingham Palace issued a statement hinting that this part-time notion had caught some in the royal household by surprise. Discussions with the Duke and Duchess, it said, were “at an early stage.″

With his ginger hair, close-cropped beard and easy manner, Harry had become one of the royal family’s most popular members after shedding the hard-partying image of his youth. The youngest son of Charles and the late Princess Diana, Harry is sixth in line to the throne, after his father, William and William’s three children. More importantly, he and William were seen as a new generation who would modernize the royals.

But there’s no precedent for a part-time role in the House of Windsor’s family firm. After all, Edward VIII was largely shunned by the royal family after he abdicated the throne to marry American divorcee Wallis Simpson in 1936.

Aggrieved taxpayers insisted that Harry and Meghan repay the 2.4 million pounds ($3.1 million) of public money spent to renovate the house in Windsor where they had planned to live. Their social media feeds, normally full of heart-shaped emoticons, were flooded with ill-tempered commentary about their decision to abandon Britain.

A family summit sought to hash out a way forward.

Finally, the queen stepped in: Harry and Meghan would stop carrying out royal duties in March, would pay back the renovation costs and would receive no public money after they stepped aside. While Harry and Meghan would always be part of the royal family, they won’t be allowed to use the word “royal″ to earn a living.

That meant the couple had to abandon plans to use the “SussexRoyal” brand they had sought to trademark.

Well to start with, they won’t use their royal titles.

But other issues remain: how will Harry and Meghan earn a living and who will pay for their security, which has until now been financed by U.K. taxpayers? The Canadian government has said it will not.

The couple are expected to earn their keep at least partly through speaking engagements — sort of like the Obamas. They already spoke at a JPMorgan investment conference last month in Florida, but it isn’t known whether they were paid.

“When you look at the royal family, their security package is very much built on a model from cradle to grave,″ said Morgan, the director of operations and training for the security firm Trojan Consultancy. ”It’s built on an element of rapport and trust … when we talk about the cost, the initial setup of that team will be quite important.”

But many royal watchers are more interested in what caused this seismic shift in the British monarchy. Some blame Meghan, who admitted last year that adjusting to royal life had been difficult.

The 38-year-old Los Angeles native graduated from Northwestern University and carved out a career in movies and television long before she met Harry. The couple’s first child, Archie, was born in May 2019.

Harry and Meghan’s agreement with the queen calls for their decision to be revisited in a year. They may choose to return to front-line duties, where their super-celebrity status allows them to highlight their favorite causes.

But will they miss it? Meghan might miss the events like one on Friday, in which she urged male students to honor the women in their lives. Ecstatic students offered rapturous applause at her message of empowerment.

Harry for his part has a special bond with British military causes, such as the Endeavour Fund, which helps wounded service personnel use sports to recover from their injuries. He promised he wouldn’t go away.

“A lot of you tonight have told me you have my back,” he said in a veiled reference to his royal struggles. “Well

I’m also here to tell you, I’ve always got yours.’’