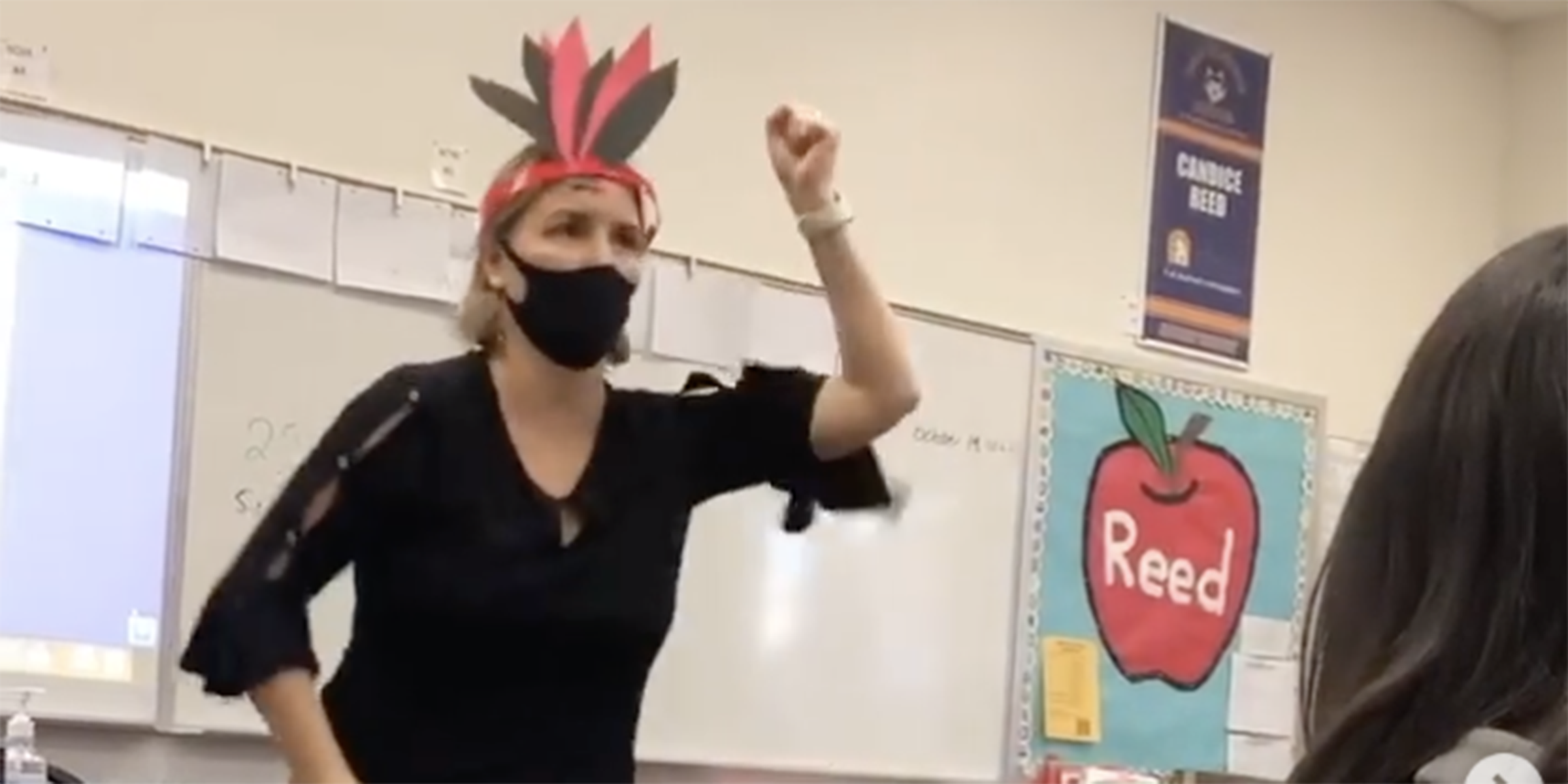 Riverside teacher Candice Reed has gone viral for all the wrong reasons. The teacher, who works at John Wright North High School in Riverside, was pictured performing in a Native American headdress and making tomahawk chop motions. The performance was supposed to demonstrate concepts in a trigonometry class, but Reed wore stereotypical images during the display.

A student in the class, who is of Native American heritage, recorded the demonstration because he found it offensive. The video was later widely shared on social media and made national news.

Reed is currently under suspension.

“A recording of one of our teachers has been widely circulated on social media. These behaviors are completely unacceptable and an offensive depiction of the vast and expansive Native American cultures and practices. Her actions do not represent the values of our district. The teacher has been placed on leave while the district conducts an investigation,” said a press statement.  “The Riverside Unified School District values diversity, equity and inclusion, and does not condone behavior against these values. We are deeply committed to implementing inclusive practices and policies that honor the rich diversity of our district and the greater region. We will be working with our students, families, staff and community to regain your trust.”

“We fully condemn the actions that took place at John W. North High School earlier this week. The teacher’s behavior was highly inappropriate and offensive,” according to a joint statement by Assemblymembers James C. Ramos (D-Highland,) Jose Medina (D-Riverside) and Sabrina Cervantes (D-Corona.)

Native American groups say they are still battling to be taken seriously and not have their culture used for stereotypical purposes. Unfortunately, this demonstration doesn’t help the situation.

“You can teach American Indian history. The indigenous people’s history by not accurately culturally appropriating yourself into it,” said Nick Tilsen, CEO and president of Oglala Lakota Nation, in an interview with NBC Palm Springs.

Tilsen added Native Americans are still sensitive about the way they are portrayed in popular culture and are upset at how elements of their culture have been appropriated.

“The way we reclaim our power as indigenous people is through education and the decolonization of education. It was used to assimilate people to brainwash our people. Force us to cut our hair,” said Tilsen.

One way more Californians can learn about Native American culture is through ethnic studies courses. Ethnic studies is now a requirement to graduate from high school in California.

Assembly Bill 101, the law-making ethnic studies a graduation requirement, was introduced by Medina.

“The inclusion of ethnic studies in the high school curriculum is long overdue. Students cannot have a full understanding of the history of our state and nation without the inclusion of the contributions and struggles of Native Americans, African Americans, Latinos, and Asian Americans,” said Medina in a press statement.